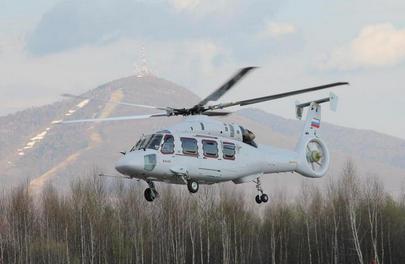 A prototype of the medium-sized multi-use helicopter Ka-62 took its first flight on 28 April at the factory of the Progress Arsenyev Aviation Company, located in Russia’s Far East.

During the course of the first few tests, the helicopter successfully completed a 10-minute flight in addition to several maneuvers.

Flight tests of the Ka-62 were begun far behind schedule—in the beginning the first flight of the rotorcraft was planned for December 2014, but was later rescheduled for the first half of 2015. At that time there was word that the Ka-62 would not be certified until 2017. The reason for the holdup in the schedule was an incomplete account of risks and the high level of innovation of the aircraft, according to deputy general director of production of Helicopters of Russia Andrey Shibitov.

Development of the Ka-62 was launched in 1992. The aircraft is planned to be equipped with two Ardiden 3G turboshaft engines, with 1775 horsepower at takeoff. According to data from the aircraft’s manufacturer, the maximum carrying capacity of the aircraft is expected to make up 2,200-2,500 kg, while the maximum takeoff weight will be 6,500-6,800 kg. The helicopter will have a maximum speed of 310 km/h and a cruising speed of 290 km/h. The range of the craft is set at 720 km with use of the main tank, and 1,135 km with additional tanks.

The engines are not the only foreign components used in the manufacture of the Ka-62; other components, including the aircraft’s transmission, are also produced abroad. It is expected that the foreign parts will be replaced by domestic ones in the future.

According to the most recent reports, three prototypes are being prepared for testing.