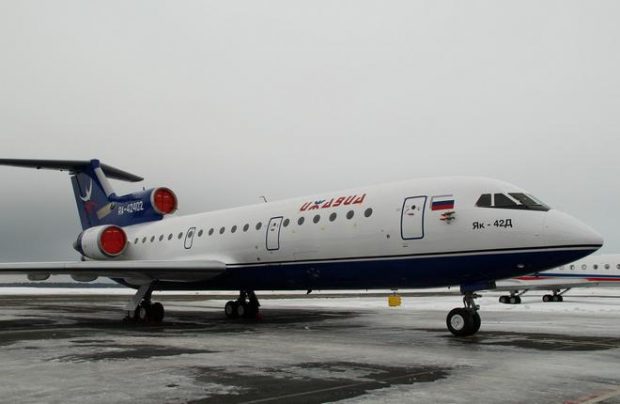 Izhavia, an airline based in Russia’s Republic of Udmurtia, has taken delivery of its ninth Yakovlev Yak-42D airliner. The aircraft, tail number RA-42402, is designed to carry 104 passengers in a two-class cabin layout, the company reports.

According to open sources, the airframe was built in 1991 and has logged 17,000 hours flying out of the OEM-imposed limit of 40,000 hours. Prior to delivery to Izhavia the aircraft underwent maintenance at RosAero MRO center (Bykovo aircraft repair plant) where it faced large-scale refurbishment and modernization.

Izhavia put the aircraft into commercial operation on March 7 with an inaugural flight from Izhevsk to Moscow.

The carrier is interested in further renewing its fleet. In November 2015, CEO Alexander Gorodilov said Russia’s new Irkut MC-21 single-aisle mainline aircraft was the company’s preferred option. Until the type has entered operation, Izhavia is planning to keep its Yak-42Ds flying; these airliners, Gorodilov noted, will remain in demand on the carrier’s northern routes for a long time. As for Sukhoi Superjet 100 (SSJ 100) regional aircraft, the operator considers them unsuitable for its purposes, primarily due to their insufficient seating capacity.