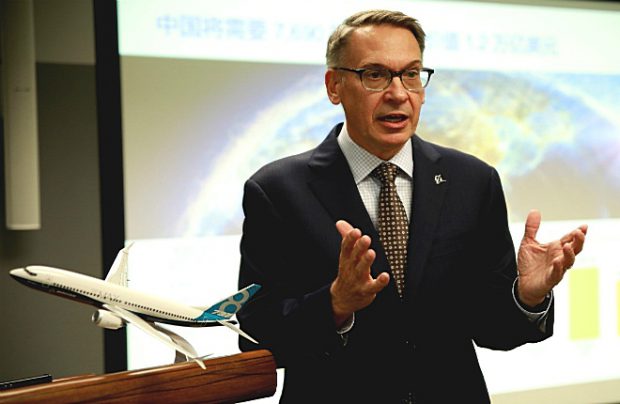 The 2019 posed new challenges for The Boeing Company. On the eve of the MAKS-2019 air show in Russia, Randy Tinseth, marketing vice president for Boeing, told ATO Show Observer (Russian Aviation Insider’s sister publication) about compensations to 737 MAX operators, prospects for the Russian and Central Asia market and new potential competitors of Boeing and Airbus in the future.

Mr Tinseth, Boeing forecasts that in the nearest 20 years airlines in the region will need 1,280 new airplanes valued at US$160 billion, as well as services valued at US$270 billion. Based on your assessment please specify which aircraft types will carriers in Russia and Central Asia require, narrow-body or wide-body?

At Boeing, we split the market into four different jet aircraft segments. Our forecast for 1,280 aircraft includes regional jets with 30-90 seats, single-aisle airplanes like the 737 MAX for more than 90 passengers. Also we have a third segment for wide body aircraft. And finally we have a market segment for new production freighters. So, as we look at Russia and Central Asia market, we find a market that will be dominated by single-aisle planes like the 737 MAX or A320 that will account for about 70% of all deliveries over the next twenty years. Next to that will be the market for wide bodies.

If we talk about Russian market specifically, what kind of airplanes you see here in the nearest 20 years?

How are things going with your services business?

We’ve seen very robust global growth in our services. The growth has exceeded the industry average of 3.5% as our growth in 2018 amounted to 17%. Positive dynamics is expected throughout our portfolio, which includes products and services in the field of supply chain (production and distribution of components), engineering, modifications and maintenance, digital aviation and analytics, as well as training and consulting. In Russia and Central Asia countries we offer the same services portfolio to the region airlines which is available worldwide.

Countries of Russia and Central Asia region are very diverse from the point of view of political and economic processes. How will you diversify your approach to each of these countries? Or there are no differences among Kyrgyzstan, Turkmenistan and Russia, that would affect sales of your products?

I’ve worked in sales and marketing for a very long time. Airplane sales really begin with the customer. At Boeing, we focus on understanding the customer’s needs and solving their problems. Every customer is different. Their needs vary and depend on what their business model is and who is making the purchasing decisions, among other factors. We see this across Russia and Central Asia region. And then each country is different  — every company have different needs , requirements and problems they are trying to solve — so you have to make sure that you understand who is in that country or around the country will also be part of the decision or part of the authority to make sure they can go forward. So first and foremost you have to work with the customer to identify a solution and work with the regulatory and government agencies.

Let’s concentrate on Russia. Why Boeing, unlike Airbus, for a long time has not presented its airplanes at MAKS air show? What has to happen to make Boeing display its aircraft in Zhukovsky again? Or do you reject this opportunity because presence of Boeing aircraft at MAKS air show jeopardizes their sales in the region?

We usually bring an airplane when we have a new airplane model or when we have an airplane on tour. Unfortunately, for one reason or another we haven’t been able to do that at MAKS. This is an incredibly important show for us because this is an important market. This year, we have more executives at the show to support our customers and show our support of the industry. You might say Airbus does one approach at MAKS, we do a different approach. But I don’t think there’s any question to the importance of this market, the investments we’re making in this market, I think that we’re probably second to none. There’s always a possibility to bring a new Boeing airplane to the Air Show in the future.

Understood. We all know that politics and aviation are inseparable. What is the outlook for your single-aisle airplanes in Russia after launch of MC-21 on the market?

If you look at our global market, we project operators will demand about 32,000 single-aisle aircraft over the next 20 years. It’s a very big marketplace, where Airbus and Boeing play an important role. It’s also a potential market for the MC-21 and the Chinese C919. When I look at that market, I see room for us and for Airbus to grow. There’s probably room for one or two new competitors to be successful in that market in the future. I don’t know who that will be. At the end of the day it’s going to be up to customers to make their choice. In perspective, we have to compete for every sale and every customer.

So, could MC-21 become a competitor for your products?

We have to focus on our business not the competition. Again, I could see one or two new competitors in the single-aisle market becoming successful. Those competitors have to have the right strategy to deliver a great airplane and reliable service and support. I think any new manufacturer has to make sure they’ve got the right airplane, build it at the right rate, have the right cost structure, and if they can do it, they are going to be successful.

In 1993, the average age of Boeing aircraft operating in Russia was 15.5 years. Over the past 26 years, we have been seeing the Boeing fleet gradually becoming younger and approaching the world average of 11.8 years. Given the tendency to rejuvenate the fleet, there is a high probability that within five years the aircraft fleet in the region will become younger than the global average.

Do you see a place for freighters on the Russian market and why?

We do see a solid marketplace for freighters — in general we see a demand for about 50 aircraft of this type over the next twenty years for Russia and Central Asia.

A lot of that freighter capacity will be required for companies like Volga-Dnepr and other cargo carriers helping to do an internal trade within Russia and Central Asia as well as to and from other countries worldwide.

When you mention cargo aircraft, you mean wide-bodies. The volumes you have announced for the production of 50 aircraft in the next two decades are more likely to indicate a recession in the cargo aircraft market or not?

It is the smallest market units, it’s about freighter aircraft over the next twenty years, but it is rather substantial in terms of the value. If you think about it freighter aircraft tend to be big freighters like 747, like 777 freighters, like 767 freighters – those are wide bodies at all come with a fairly hefty price tag, so there’s a lot of value I catch to those. Boeing have virtually a 100% market share in the freighter market or close to a 100% market share.

Demand for extra-large aircraft such as 747 and A380 continues to be low. As the result, this year Airbus decided to close the production of A380 in the nearest few years after delivering all unfilled orders. Does the market for a cargo version supports a program? What are your expectations of the extra-large passenger aircraft — is the era of that type is over?

That’s a great question. I think when we look at the 747, its future is in the freighter market there’s no question about that. And you know we have freighters in our production line that take us into the next decade, so I think we’re in a good place in terms of the 747. As a passenger the future will really be around our 777 program. The 777 is a plane that is smaller than the 747 and A380 but has a twin-engine and wing design that is significantly more efficient. Moreover it has a lower cost than those bigger four-engine airplanes. In my mind, the 777 family is really going to be the replacement of the A380 and 747 in the future, so twin-engine airplanes have really taken over that market from the four engine airplanes like the A380 and that’s why the A380 even relatively early in its production cycle will be going away.

In other words, the future for the Russian market, in your opinion, is up to …

We done well with the 737 NG and the 737 MAX so those airplanes have become the main stay at a number of airlines. Over the longer term, there are opportunities throughout the region for both the 737, 787, and 777.

Earlier you said that you consider the quantity of deliveries to be a true measure of success in the aviation market. We all understand what are reasons for this, but according to forecasts this year, Boeing is losing to Airbus. In the 1H of 2019 the corporation reduced deliveries of aircraft by 37%. What are the expectations in this regard?

Take a look: we’ve split the single aisle market with Airbus over the last several years about 50/50 on a global basis in terms of deliveries. Furthermore, our wide-bodies have done extraordinarily well both in terms of orders and deliveries — approaching about 65% share over the last 5,5 years.

And what about the future of 737 aircraft, you closed NG program and what will happen next?

Yes, we are phasing out the Next-Generation 737. We have a handful of aircraft to deliver, but essentially our production today is really focused on the 737 MAX.

In conclusion, I have to ask you about Boeing 737MAX. How are you going to regain trust of airlines to Boeing 737 MAX in the region?

It’s the most important question we have to answer. As you can imagine, this has been a difficult situation. We are very sorry for the loss of life in these two accidents. And we know that it has been a very difficult time for our customers because they have had to ground their airplanes and they can’t take delivery of new ones during the busy summer season. For now, we are working as hard as we can to get the airplane safely back into service. We’re working closely with the regulatory authorities to make sure that we do all right things to safely return the plane to service and we believe that would be able to do so in the IV quarter of 2019.

Will Boeing compensate airlines their losses incurred due to non-delivery of Boeing 737MAX on time?

We’re working with all of our customers to mitigate the impact from the MAX grounding and resuming airplane deliveries. Compensation can take many forms. It can be money or services that will bring them value. It will be looking at anything that we can bring value to our customers in a way that helps them out and is truly a win for both of us. So we’re really focused on mitigating the impact and supporting our customers in a variety of forms.