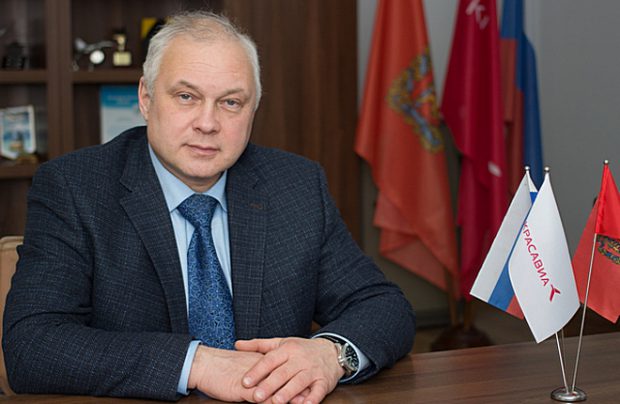 Owned by the administration of the Krasnoyarsk region – which is an eastern Siberian federal district of Russia occupying a land mass of some 2.34 million square kilometres, twice that of western Europe and 10 times larger than the UK – KrasAvia found itself among Russia’s top 30 airlines at the end of last year, despite a slight passenger numbers decline – but heroically in the black.

These encouraging results, after many years of hard effort, were considered to be the basis for an expected breakthrough for the regional carrier this year as it confidently planned to boost its fleet with the addition of ATR-72 turboprops. However, a string of unpredicted obstacles, including the current COVID-19 crisis, the devaluation of the rouble and a reduction of shift operations in the oil industry, may de-rail the project.

KrasAvia’s general director Andrey Egorov has shared with Russian Aviation Insider an unvarnished insight on Russia’s most vulnerable of all air transport segments, the regional and local air travel market.

How are things looking for you?  The ban on international air connections under COVID-19 has not affected us directly, since we don’t have any international routes. But this pandemic coincided with or caused an economic downturn, and with the rouble devaluation and other consequences, it has undoubtedly interfered with our business, because we also have currency-sensitive costs in our unit price.

It is obvious that those airlines that normally operate international flights will now partly re-direct their fleets onto the domestic market. This seems quite logical, as they need to keep generating revenues to continue paying wages and make lease payments and so on. But their intrusion in the domestic market may turn out to be rather clumsy.

On the other hand, the on-going virus outbreak has affected domestic air travel demand as well, as people have simply postponed their travel plans for ‘better days’. At the same time, many corporations are prohibiting commuting and business trips. I know that large companies do that. But even individual travellers are now reconsidering their holidays and some of them are cancelling their travel plans altogether or are waiting to see how the situation develops. People in our northern region [who traditionally travel for their summer holidays] are just sitting at home.

Those are industry-wide woes. Are there any problems specific to KrasAvia?  Alas, there are. We are involved in the transportation of shift workers for the oil and gas sector, and this is a large segment of our business. Oil companies are penny-pinching at the best of times but now, with the latest oil price plunge, they have found themselves with very empty pockets and consequently have embarked on radical cost cutting measures and reduced shift operations. Some customers have already informed us about foreclosing their contracts, and others are taking their time to rearrange plans. Inevitably, this means less work for us – and reduced revenues –and there’s nothing to reimburse us for these losses. That is something we could not have predicted because this segment at least appeared to be stable.

There are not so many [purely] regional airlines like KrasAvia. Subsidies from federal and regional budgets are a substantial support for us even in normal conditions, bearing in mind the existing [low] purchasing power [of the regional travelling public]. And today, with all of these new negative components, we have become very vulnerable. We’re losing our traffic and revenues, but the subsidies won’t increase, which results in cash deficiencies. So we might have to scale down our scheduled operations as well. But what is a scheduled air service to [remote] northern localities? Frequencies are such that they’re hard to cut even further, and it’s just not fair towards the people who live there.

So with all these new challenges factored in, we’re forced to think about cost-cutting measures. We might have to ask our pilots, technicians and administrative workers to go on unpaid leave. We have already sketched out some measures and are looking at others and, like the entire country, so that we don’t end up with the worst case scenario, we are trying not to rush in and watch what comes next. But apparently that’s the one we should in fact be getting ready for.

Lay-offs will be the last measure, if we ever have to resort to it. In our industry people are too valuable to cast aside. So we’ll try to survive together. Crisis comes and goes, and we’ll be back to normal after a while.

What do you think of the measures taken by Rosaviatsiya, for instance, regarding a reduction of the costs for air traffic management (ATM) services?  We accept these moves with gratitude. A reduction of ATM costs is a support measure, no matter how small. Of course, it is applicable only as long as the aircraft are in the air, not standing on the ground. The regulator responded fast and did what it could under these circumstances, but it won’t cushion the blow. But thanks anyway.

Seeing how the ATM costs are about three per cent of an airline’s overall cost burden… Exactly.

THE WEAKENING ROUBLE AND FLEET RENOVATION

Let’s go back to the rouble devaluation. You said it was affecting KrasAvia, but you don’t have any foreign-made aircraft.  Don’t forget that some of the transactions for the aircraft are in hard currency, and not just for the [Czech-made] Let L-410. For instance, some services on the Antonov An-24/26 are provided by Ukraine’s Antonov state enterprise and Yakovlev Yak-42 and Mil Mi-8AMT types are powered by Ukraine-produced engines. Now, unfortunately, we have to reconsider our fleet renewal plans for western-built aircraft.

Regretfully, in reality, Russia’s commercial aviation industry won’t receive the first Ilyushin IL-114-300 [turboprops] before 2024 and, even if a few aircraft enter service that same year, it won’t solve the issue for the rest of the country. Only actual operations will demonstrate the flight performance economics of this aircraft. It will take two to three years to assess its overall efficiency.

How long can KrasAvia continue without a fleet upgrade?  With the An-24s, the [vintage] 50-seat regional turboprops, I’d say five years. In general, during this period, we’ll be able to maintain their flight safety and airworthiness, whilst still operating them profitably. But we need those five years to transition to the new types. We can’t just switch from the An-24 to the IL-114 overnight. That’s why we’ve been trying – and that hope hasn’t yet died – to replace the An-24s with ATR [-72]s. And we were so convincing in this that even the industry and the trade ministry’s import phase-out committee had no objections.

So what’s happening with this project now? From memory, the first ATR delivery was scheduled for this year?  We planned to launch operation of the ATRs this summer, and these plans are still in effect although, due to the current global crisis, they are now becoming somewhat dubious.

Have you held any consultations with your owner, the administration of the Krasnoyarsk region?  We communicate with the administration because it’s an investment project anyway. With the old exchange rate we were willing to finance the aircraft leasing with our own funds. Our calculations showed that we would be able to cover the lease payments from our turnover, as the ATRs would generate sufficient revenues. Now, with the current depressed exchange rate, we’ll need additional support from our owner.

Regretfully, we cannot see any realistic ways of obtaining new Russian-made aircraft. And, quite frankly, I don’t expect the [list] prices for new Russian aircraft to be lower than western-built equivalents. I’m sure they won’t. Besides, with a new type it can take several long years to completely adapt it to commercial operations, and it seems like our aerospace manufacturers believe this is solely our responsibility. When we calculate the offers of the manufacturer and the lessor, with their unmeasured appetites, factor in the cost of the money, the fall-backs of the new type’s aftermarket support, the groundings – well, it may turn out to be more expensive then just getting a used, tried-and-tested western-built aircraft. That’s what I’m concerned with.

REDUNDANCIES AND THE RIPPLE EFFECT

One last question: What’s your safety margin, so to speak? Maybe it would be easier to close down KrasAvia before all these problems pile up?  You should address this question to our owner, not me. The Krasnoyarsk region is deliberately maintaining its own airline because that’s the only way it can guarantee air connections within the region and beyond. If it were to be outsourced to commercial airlines, they would not be interested in providing transport accessibility in remote regions.

Regarding our [commercial] safety margins, we have none – and that’s after everything we’ve done in the last two years to stabilise the airline. In 2019, our net profits were about one per cent, which is fairly typical for the industry. So any aggravation of the situation will do us in, and we’ll need help from the state and from our shareholder.