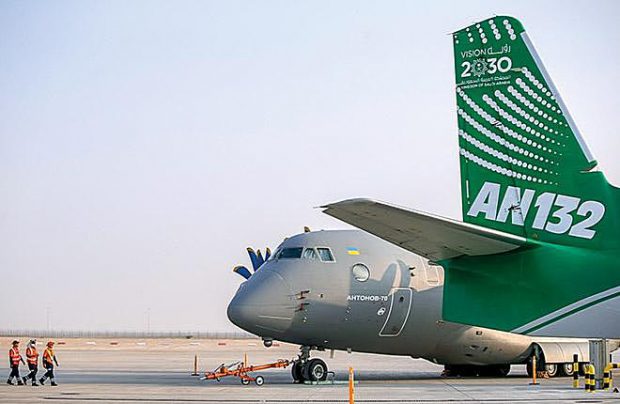 : In the search for new partners and customers, the Ukrainian aerospace industry is attending international air shows to promote its products (Leonid Faerberg)

ATO: How would you define the current status of Ukraine’s aerospace industry? Is the patient still alive?

A.K.: The aircraft industry in Ukraine is history. The last serial aircraft produced in Ukraine was the [Antonov] An-158 for Cubana, Cuba’s national carrier, which made its first flight in April 2015. Somewhat earlier, in January of the same year, the last Ukrainian-made An-148 was built, which is now flying in North Korea, often with [Supreme Leader of North Korea] Kim Jong-un on board.

ATO: Who is responsible for such a lamentable condition of the country’s aerospace industry? A.K.: Successive Ukrainian governments which inherited a huge aircraft production complex from the USSR but were not able to sustain its efficiency, which resulted in the gradual degradation of the industry until its potential was finally lost. Shady management only fostered the process. For years, aircraft manufacturer Antonov has been living off Antonov Airlines, which transports outsized freight using An-124 Ruslans and An-225 Mriyas – but not through revenues from selling aircraft. An opportunity to revive the industry came about in the mid-2000s after a cooperation agreement between Russia’s United Aircraft Corporation (UAC) and the production factory Aviakor focused on programmes developing the An-148 and An-140 aircraft types. However, this was ultimately lost in 2014 because of political implications and a unilateral breach of cooperation agreements between Ukraine and Russia.

ATO: Do you think Ukraine needs to at least preserve its aircraft manufacturing competences?

A.K.: It’s already impossible to preserve the aircraft manufacturing competences. Whole schools have been lost, not only those specialising in designing transport aircraft, but also for those catering for workers who can assemble aircraft.

ATO: Is Ukraine capable of revitalising its aerospace industry without international assistance? At what cost and time? And can the Ukrainian budget afford such investment costs?

A.K.: No. Ukraine is absolutely not capable of rejuvenating its aerospace industry. Besides, it’s impossible to find international partners because, technology-wise, the Ukrainian aircraft manufacturing [now] lags behind, somewhere in the 1980s and even the Chinese aren’t interested.

ATO: Are there any Ukrainian aerospace industry assets left that may still be of interest to foreign partners?

A.K.: The Antonov Design Bureau used to be interesting for UAC for instance but now, for political reasons, no such partnership is possible.

ATO: Can you see any roads out of this crisis? What can be done with Ukraine’s aerospace industry?

A.K.: The Ukrainian aerospace industry has no future. The land where the manufacturing facilities are located have become potential sweet spots for [property] developers. This is similar to those other formerly strategic enterprises, the territories of which have since been redeveloped, like Kyiv’s Arsenal, the designer and manufacturer of optical and electronic instruments for space, aviation and ground uses, both commercial and military; or Radar, the manufacturer of avionics and radiolocation equipment for aircraft. I suppose, both Kyiv’s and Kharkiv’s [aircraft manufacturing] enterprises are bound for the same fate. I wish they weren’t, but that’s the reality.

ATO: I’m plagued by this question. Is Russia also responsible for what happened to Ukraine’s aerospace industry? Or it was pre-destined historically? In some other CIS countries, former Soviet Republics, the situation is similar as with Tashkent’s plant in Uzbekistan, which has also disappeared.

A.K.: No, I don’t think it is responsible. The Russian side proposed different cooperation options. An-148 and An-140 programmes were put on hold for purely political decisions taken by the Ukrainian parliament in 2014. Russia was interested in the An-148 regional jet for its defence ministry and government institutions, and it was interested in the An-140 regional turboprop, but [gave up and] finally opted for the local Ilyushin IL-112V and IL-114-300 types instead. There’s a significant difference between Tashkent’s plant and Ukrainian enterprises: there were good chances for development in Kyiv and Kharkiv. But self-defeating political decisions and the games of irresponsible politicians resulted in the demise of the hi-tech industry. And because of similar games, Ukraine is now also on the brink of losing another hen that lays the golden egg – revenues from transporting Russian gas to Europe.

ATO: Are there any lessons to be learned from this sad story by those who run the Russian aerospace industry?

A.K.: Although there are plenty of problems in the Russian aerospace industry, I cannot see any lessons to be learned from their Ukrainian counterparts except, perhaps, that it is unwise to imitate production processes and then just exercise wishful thinking. It is important instead to focus on a small number of projects that have real perspectives in the global marketplace – and then make great efforts with aftersales support. It was sad to watch the situation unravel around the Superjet 100 with [Irish regional carrier] CityJet, when such a brilliant opportunity to stay in the European market was wasted. I hope that appropriate conclusions will be made for the MC-21 [Russia’s advanced mid-haul airliner] and these mistakes won’t be committed again.

ATO: Ukraine has a strategy for the development of its aerospace industry but, I suppose, it is not being followed

A.K.: It is no more than a declaration. It’s totally unrealistic. We’ve got lots of such documents in this country.

ATO: Did I understand correctly that the new Ukrainian authorities shouldn’t bother with developing the national aerospace industry – because it is inefficient and it’s too late? But in this case, what will happen to those people working in the industry and the respective associated educational institutions?

A.K.: That’s right, all opportunities have been wasted. Even the pride of Ukrainian politicians, the Antonov An-225 Mriya, next to which they love to pose for their pictures, should soon make its way to museums because it’s three decades old. Also, there are not too many professionals left in the industry. The average age of all Antonov employees is 50. Not surprisingly, universities are adapting to the new market requirements, and have started preparing staff for airlines, airports and ATM.

ATO: This is ever so sad.