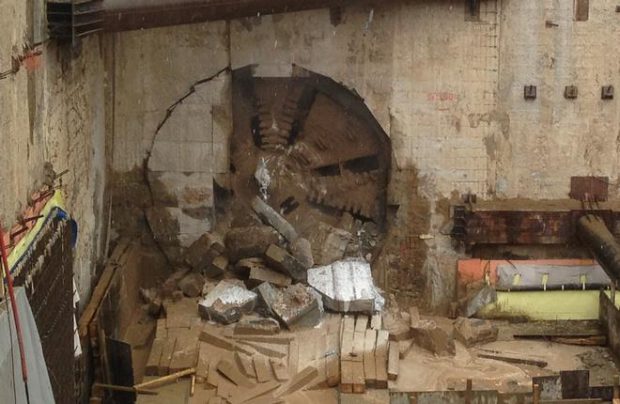 The tunneling shield, which is cutting through rock at the end of the inter-terminal tunnel at Sheremetyevo airport (Photo by Russian Aviation Insider)

A second tunnel at Moscow Sheremetyevo airport, which connects the northern and southern terminals, reached completion on Tuesday, February 21st. In October of this year the technical installation in the tunnels will be completed, and the tunnels should begin operation by the end of the year.

The total excavation took a year and a half, during which two tunnels were dug–one for passenger transport, the other for baggage (the one which was completed on the 21st)–as well as planning and government approval stages. The project is unique in that the tunnel was excavated for the first time under an operating runway, according to the first deputy general director for production at Sheremetyevo Andrei Nikulin.

The project is being carried out in preparation for the FIFA World Football Cup in 2018, which is to take place in several Russian cities. The creation of the two tunnels is included in the development plan for Aeroflot, which is based at Sheremetyevo airport. “The tunnels will provide a shorter transfer time for Aeroflot, of about 50 minutes between the northern and southern terminal”, said Nikulin. – “This corresponds to the strategy of the airline’s development. By 2026, we should have a capacity of 80 million passengers per year. The tunnels will provide more than enough transportation capacity.”

The tunnels, which have a diameter of 5.4 meters and a length of about 2 kilometers, will connect terminals E, D and F with the northern B terminal. The yearly capacity for the passenger tunnel will be some 11 million. Passenger from different zones will be placed in different cars, and the total trip between the terminals will take 3 minutes. In case of heavy traffic, extra cars will be added. The baggage transport system will be able to accommodate 1800 units per hour.

Currently at the northern complex, a new terminal B is being built, which will service domestic flights. The capacity for this terminal is expected to be 20 million passengers. Also at terminal B, a new refueling station is being installed, with a capacity of 1 million liters of fuel per year.

By 2018 after the third runway at Sheremetyevo is put in use, the airport’s capacity is expected to increase from 55 to 90 flights per hour.