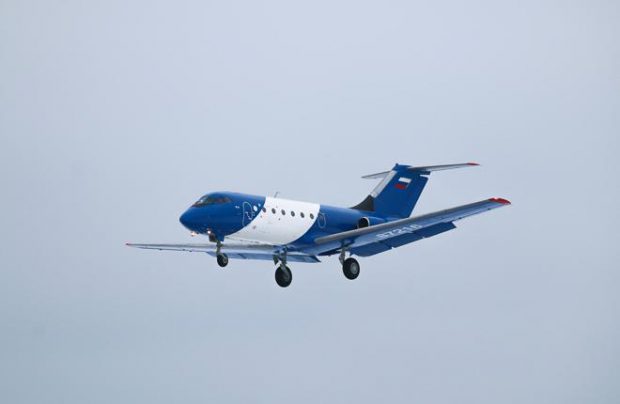 A rejuvenated, new-generation, twin-engine version of the iconic Yak-40 regional trijet aircraft could satisfy a high demand in the Russian domestic market, which currently does not offer any domestically-built jets for the 35-to-40 passengers sector.

With price tags of similar-sized foreign types too steep for the Russian market, a re-engined Yak-40 is an exciting major project at the Siberian Research Institute of Aviation (SibNIA), which is in the process of developing an upgraded Yakovlev Yak-40 twin-engined version.

The primary objective of the new testing phase on the re-engined Yak-40 was to receive additional information and collect statistical data.

The Yak-40 first flew in 1966 and more than 1,000 of the type were built before production stopped in 1982. The airliner was originally designed to carry 24 passengers and its seating capacity was subsequently increased to 32. The Yak-40 was originally powered by three 1,500-kg-thrust Ivchenko AI-25 jet engines, which are in series production at Ukrainian engine specialist Motor Sich.

The current upgrade program has replaced the baseline’s original three powerplants with a pair of Honeywell (formerly Garrett) TFE731 engines. The testbed, which is based on a production airliner built in 1975, is powered by two TFE731-3 Series engines, each with around 1,700 kgf take-off thrust.

In the current modernization phase, the Yak-40 is being tested in a twin-engined configuration for the first time. The No 2 AI-25 powerplant, the only one of the original three engines fitted with a thrust reverser, was taken off the aircraft and replaced by a fairing. The original AI-9 APU was replaced by a Garrett (Honeywell) 3092 APU with a 9 kW starter generator. The engines can now be started electrically instead of pneumatically. “The objective of these test flights is to check the aircraft’s structural and aerodynamic behavior,” says Ivantsov. “After that, we will rearrange the airframe to install more powerful engines, most likely the TFE731-5 Series. This will happen in January 2017.” The TFE731-5, however, may become an interim solution.

“If the flight tests confirm the required performance (the climb gradients needed for certification), then we will most likely go with the TFE731-5 series as our final choice,” Ivantsov reveals.” Later on we may install thrust reversers or think of something else.”

Honeywell’s first TFE731 (turbo fan engine) version was certified in 1972, and the TFE731 family now comprises 20 models. The smallest, the TFE731-2 series, has a take-off thrust of around 1,600 kgf. The largest family member, the TFE731-F125IN, produces approximately 4,100 kgf of thrust in afterburn mode.

Sovak notes that the TFE731-3’s power does not meet the upgraded Yak-40’s requirements: “We have already prepared two pre-owned TFE731-5s. They are physically in our possession. We obtained them from our engine bank.” Sovak says TFE731-60 engines may also prove a good solution.

Neither Ivantsov nor Sovak specifies which particular modification of the TFE731-5 series might be used. The Honeywell product line includes variations of this series with a range of 2,050 and 2,150 kgf take-off thrust. The TFE731-60’s take-off thrust roughly equals 2,270 kgf.

SibNIA’s presentation specifies that the TFE731-3 engines are connected to the testbed’s original electric and hydraulic systems, and also to the original air bleed system, which supplies the air conditioning and anti-icing.

Although a new engine instruments panel has been installed in the testbed cockpit, the standard, proven, Yak-40 controls stay.

Overall, the upgrade is expected to considerably improve the Yak-40’s performance, shortening the take-off distance by 50 per cent, halving the time and fuel spent in climb, cutting fuel burn by half in the descent and approach phases, and reducing the landing distance by a factor of 1.2 to 1.5. The aircraft’s range will increase by 30-40 per cent, and cockpit and cabin noise levels lowered.

The re-engined aircraft will have a cruising airspeed of at least 590 km/h, compared to the baseline’s 510. Its take-off weight will be at least 17.2 tonnes, which equals the baseline’s MTOW and the upgraded airliner will have at least 3,200 kg payload capacity, against the baseline’s 2,720, according to OEM Yakovlev Design Bureau. The modernized Yak-40 will also enjoy a ceiling of 8,600 meters instead of the current 6,000; whilst fuel burn will be greatly reduced, not exceeding 650 kg/h (compared to the current 1,059 kg/h, according to ATO Sourcebook). The institute points out that there are currently more than 190 Yak-40s still flying that have 10 and more years of operational life left; and there are enough aircrew and ground specialists qualified on the type still in business to continue operating them.

The SibNIA presentation does not hint at the possible cost of the re-engine program. Sources at the institute said in 2013 that, with leased TFE731s, re-engining a single Yak-40 would cost around US$500,000. If the powerplants were to be bought on the market, then that figure would increase to $780,000. With recently overhauled engines the price tag could be as steep as $2.5 million per airframe. Back then, however, the prices may have been quoted for a three-engined configuration with TFE731-3 powerplants.

According to Ivantsov, SibNIA has had a visit from the general director of Belarus’s Minsk-based Civil Aviation Plant 407, the only enterprise in the world still offering overhaul services on the Yak-40: “They have a registry of aircraft that they repair; they have very many orders, and not only from Russia. There are clients in Africa and South America as well. Minsk is interested in our expanding the re-engining program, because this would also mean new orders for them,” he says.

Asked how SibNIA is planning to have the re-engined Yak-40 certified, Ivantsov replies: “Based on our experience with the TVS-2MS aircraft [Antonov An-2 biplanes re-engined under a SibNIA project], amendments are being introduced into the aviation rules which specifically apply to certification and profound modernization. This is being done to synchronize our regulations with the western practice of issuing the so-called supplementary type certificate (STC), which does not require the OEM’s approval.

Yakovlev is not getting in the way of the project. “They made it clear that they are not interested in upgrading the type. In fact, we may say that they have nobody around who would be able to upgrade it. Therefore, we will most likely choose the certification route, as was the case with the TVS-2MS,” he continues.

Ivantsov says SibNIA expects to continue even further with its Yak-40 initiative and is aiming to gradually replace the aircraft’s primary structural elements. A similar program is currently being implemented on the An-2.

The SibNIA presentation reads that the institute is considering a number of projects to create next-generation regional aircraft capable of seating 30-to-50 passengers. The first phase of this might involve replacing the Yak-40’s wing with one with new profiles, shape and high-lift devices, and would also make wide use of composite materials. These developments are expected to improve the aircraft’s cruise, take-off and landing performance even further.

The technological solutions involved in re-engining the Yak-40 and in creating new structural elements for the future interim version will create several new-generation airliners. The presentation offers a glimpse at the preliminary codenames for these projects: VIC 30X (a 30-seater), VIC 40X (a 40-seater), and VIC 50X (a 50-seater).