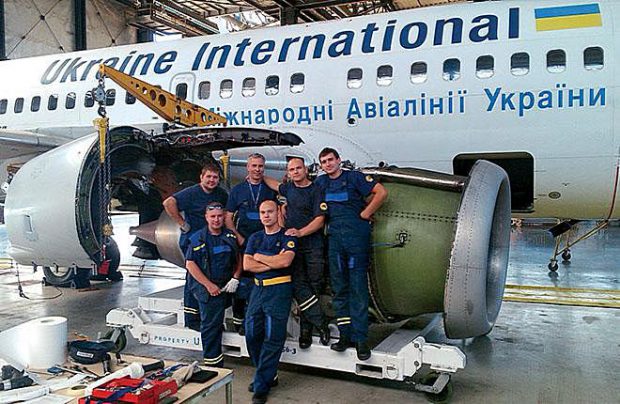 To expand its business, MAUtechnic needs further investment, but its parent Ukraine International Airlines may have other priorities (MAUtechnic)

MAUtechnic, a maintenance, repair and overhaul (MRO) services provider, which last year changed its status of Ukraine International Airlines’ (UIA) in-house maintenance base to that of an independent company, has won USAA Part 145-approval from the Ukrainian aviation authorities. The licence allows the company to perform line and base maintenance (up to C-check heavy maintenance) on Boeing 737CL/NG and Embraer E190 aircraft, as well as line maintenance on Boeing 767s, component repairs and non-destructive testing.

MAUtechnic, whose name stems from the Ukrainian MAU acronym for Mizhdunarodni Avialinii Ukrainy, or Ukraine International Airlines, may be stuck in a rut though, as a Russian Aviation Insider industry source reveals that the MRO off-shoot is currently continuing to exclusively serve the 50-strong fleet of its parent airline at its hangar facilities located at Kyiv’s Boryspil airport.

The hangar, with a floor area of 7,200 square metres, offers space for up to four Boeing 737-sized aircraft. It also runs line stations in Odessa, Lviv, Dnipro, Kharkiv and Ivano-Frankovsk, and rents additional hangar space at Dnipro airport during peak seasons.

A source close to MAUtechnic has told Russian Aviation Insider that, before the end of this year, the company is planning to achieve its own certificate for the line maintenance of Boeing 777-200s (another type its parent operates) and its components, a capability which it currently offers under Ukraine International Airlines’ USAA Part 145 certification. In addition, acquiring Part 147 approval for training personnel will strengthen the company’s position, as this would enable it to offer such training services to third parties.

In July, MAUtechnic’s general director Alevtina Fursayeva revealed plans to obtain European EASA Part 145 approval – the licence UIA held from 2002 to 2012, when it was suspended following an audit. For financial reasons, the airline later opted for not extending its certificate. However, MAUtechnic wants to go beyond that, and also obtain the EASA Part 21 certificate for producing cabin interior components. More distant plans include adding the Boeing 737MAX to its capabilities.

It is safe to attribute MAUtechnic’s desire to win European approvals to the fact that Ukraine’s collective commercial airliner fleet is, to a great extent, owned by international leasing companies, which means operators are required to resort to those MRO centres with European or US certificates for all their maintenance needs. However that milestone is not an easily achievable one for the Ukrainian provider, as it faces an existing heavy workload, the source says. Such business expansion would require additional investment for employing more staff, building up the company’s capabilities and adding hangar space for operating heavy checks on wide-body aircraft.

Its parent Ukraine International still sends its wide-body aircraft to MRO providers outside Ukraine – to Turkish Technic in Turkey, Linetech in Poland, Aerostar in Romania, for example. However, UIA currently has other priorities in terms of financing and so a strategic partner interested in developing the MRO business in Ukraine could open new opportunities for MAUtechnic. The country’s advantages include the relatively low cost of labour, and acceptable training facilities. On the other hand, even with EASA approval, it will be a challenge for MAUtechnic or any other local provider to compete with east European rivals in Poland or Romania for contracts from European customers. The main issue is not the cost or the quality of the service, but the subsequent aircraft downtimes. An MRO business in Ukraine would also suffer from delays caused by slow Customs clearance procedures for incoming parts and components.