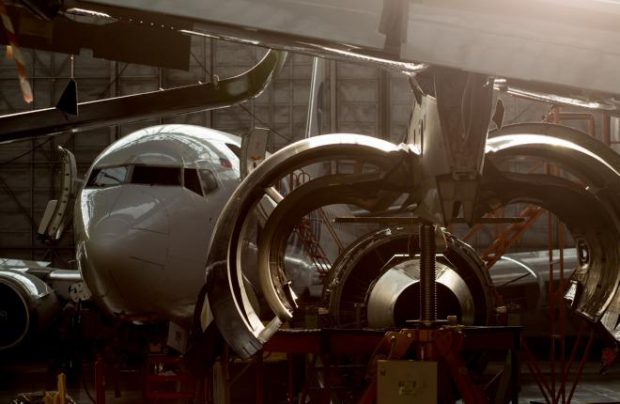 The number of D-checks performed by Engineering Holding staff enjoyed a recovery in 2016 (Photo by Leonid Faerberg / Transport-photo.com)

Engineering Holding (Engineering), the leading provider of aircraft maintenance, repair and overhaul (MRO) services in Russia and the CIS, reports that its operational results last year were largely at the same level as 2015, but newly-introduced streamlined processes – with a focus on new technology and better optimized internal practices – are expected to bring higher efficiency and profitability, the company predicts.

Last year Engineering provided ground handling for some 32,500 aircraft departures, about 30 per cent less than in 2014. A spokesperson has explained to Russian Aviation Insider that the number of such operations is in decline because the ground handling business, which is not part of its maintenance portfolio, is gradually being handed over to sister organization S7 Service, part of the S7 Group.

This trend shows that the company is on track to increase the number of heavy maintenance operations in its business model – in particular six-year, 12-year and the so-called redelivery (D-checks). At the end of 2016 Engineering had performed 24 D-checks, up from 20 in 2015 and 18 in 2014. The company has been performing D-checks on Aeroflot, Russia’s largest airline, since late 2015.

Increased D-checks is one of the reasons that has allowed Engineering to maintain its operational results at 2015 levels, at 1.8 million labour-hours, down from 2014’s 1.9 million. “We are indeed past the explosive growth stage. Now we are developing in the direction of not just general aircraft maintenance but, more specifically, in advanced technologies. We have launched new facilities for engine maintenance and repair, and also for lavatory servicing,” says the spokesperson.

A variety of facilities

Engineering sees its mission in introducing to Russia those repair technologies that had not previously been available and is confident that these upgraded new services will steadily boost its income.

Last year the company inaugurated two unique facilities at the premises of S7 Engineering at Domodedovo. One is a specialist CFM56-5/7 engine repair shop that was launched jointly with Swiss provider SR Technics. The other, instigated with the support of Zodiac Aerospace Services, focuses on the service and repair of aircraft lavatories. The latter renovates components of the water supply and waste treatment systems and takes advantage of another sister unit, which applies Teflon coating to lavatory bowls and also specializes in restoring the leather elements in aircraft cabin interiors. Elsewhere, Engineering’s aircraft painting centre at Mineralnye Vody has once again doubled its operational results. It painted seven aircraft in 2014, 14 in 2015 and 29 in 2016, which is close to the facility’s maximum capacity. Since the beginning of 2017 the company has received 12 orders, including a batch of aircraft operated by Rossiya airlines, Aeroflot’s largest subsidiary. To keep up with the surge in demand Engineering is considering enlarging its paintshop facility.

In another milestone development, last year marked the first time the centre provided aircraft painting services to customers from outside of Russia – from the CIS area (Air Astana) and also from global customers (India’s Zoom Air). It also painted its first Sukhoi Superjet (SSJ) 100, a development that became possible once S7 Engineering had received an approval under its FAP-285 certificate for the entire range of maintenance services on Russia’s regional jet. Having entered the SSJ 100 aftersales support market it has since found two new client operators among the type in IrAero and Gazprom Avia. Rossiya, the Russian government’s flight squadron, has also joined the list of clients.

Running in parallel with the business gains in 2016 is the company’s implementation of the concept of ‘lean production’ inside all its facilities. This is a continuous initiative to identify and remove all forms of wastage. In short, lean production means maximizing each employee’s potential in business optimization as well as in offering customized solutions.

It is believed that the introduction of lean production techniques will enable the company to match and compete with average European standards within the next two years and, in turn, become one of the entire region’s leading aircraft MRO providers in three to five years.

Engineering is confident that leaner production techniques will enable it to move to a new level (Photo by Leonid Faerberg / Transport-photo.com)

Overall, Engineering Holding believes that last year heralded many new development opportunities. Whilst undertaking the massive new projects, the subsidiaries also expanded their capabilities with new and upgraded licences and certificates. “We are aiming at becoming a provider of the entire range of maintenance and engineering services. Now that we have started to implement the lean production techniques our customers can expect higher quality in even less time,” the company’s spokesperson insists.

It is not surprising that the MRO company has started the new year with an optimistic outlook. “Based on our market analysis, we believe that Russian carriers will expand their fleets, so the demand for maintenance services is sure to rise,” the company observes.