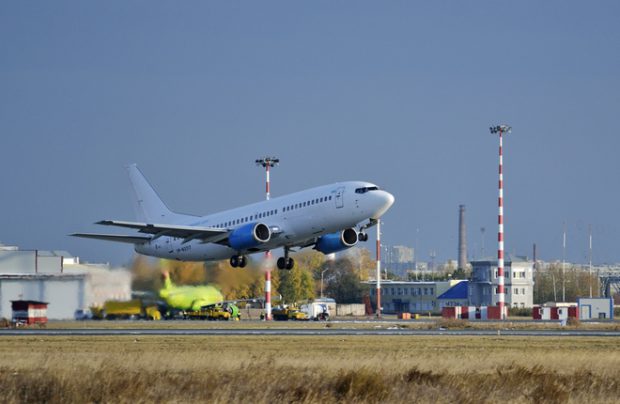 Kazakhstan’s carrier Sunkar Air (Sunkar is the Kazakh word for “falcon”), which acquired its air operator’s certificate for charter flights in June 2015, has recently put its second Boeing 737-300 into operation. Thus far, the young airline (based at the airports of Astana and Almaty) is having a difficult time in growing its passenger traffic in the business aviation segment. Nevertheless, its roster is confidently full of various sports team charters.

Apart from the two 148-seat Boeing 737-300s, Sunkar Air operates a Bombardier Challenger 850 bizjet, which seats up to 15 passengers. The carrier owns the aircraft and has a local MRO team to carry out all the required line maintenance operations within the country. Base maintenance is provided under contracts with FL Technics, Sibir Technics (Boeing 737), and Jet MS (Challenger 850).

“We view ourselves as a charter airline in the first place; we do not compete with other players in the Kazakh business aviation market,” CEO Talgat Zholdybayev revealed to Russian Aviation Insider. “We are a carrier for various sports teams and official delegations; currently we have been bringing people to the International Expo event in Astana.”

Some 80% of Sunkar’s traffic is focused primarily on sports team charters, Zholdybayev says. The airline is partnered with a number of Kazakhstan’s ice hockey and soccer teams from Kazakhstan (including Barys Astana, Torpedo Ust-Kamenogorsk, Saryarka Karagandy, and FC Kairat), as well as to teams from Russia (Amur Khabarovsk, Metallurg Novokuznetsk, and SKA Saint Petersburg) and even from China (HC Kunlun Red Star).

Sunkar Air uses its 737s to charter athletes around. The aircraft’s 148-seat cabin layout is quite convenient, as each player can occupy a whole seat row and take some rest after a game, Zholdybayev explains. Sporting event are highly seasonal, but the airline sees no problem with that as it spreads its capacity between a variety of championships to achieve year-round traffic.

For instance, the previous Continental Hockey League championship started in August 2016 and continued until February 2017, whereas the Kazakhstan soccer cup was conducted in March through February this year. The carrier uses short pauses between the events and low-season periods to carry out the required maintenance checks on its fleet.

The airline’s 737 fleet is not young: the aircraft were manufactured in 1990 and 1991. The newly received Boeing, however, was previously operated by Lufthansa, which had phased it out in excellent technical condition.

To meet the growing demand, Sunkar Air is looking to acquire another long-range passenger jet. The aircraft will most likely be newer than the company’s current airframes. “We have not decided yet whether it will be a 737CL or a 737NG,” Zholdybayev says. “The NGs are rather expensive, which makes them inefficient for charter operations.”

Although the airline is active in the sports charter niche, it is clearly demonstrating its ambitions in the business aviation segment too. “We are trying to be active on this market, but this is not easy to do in Kazakhstan,” Zholdybayev explains. “Few clients can afford charter flights, while major corporations operate their own airplanes. At the moment we are focusing on individual customers.

“We would love to see the number of our potential charter clients in Kazakhstan grow, but the market is literally standing still, being largely affected by downturns and economic uncertainty both globally and domestically. Nonetheless, the business is gradually growing and we strive to ride this trend and see what comes next. Five years ago such services were in huge demand: Kazakhstan was clearly short of business jets.”