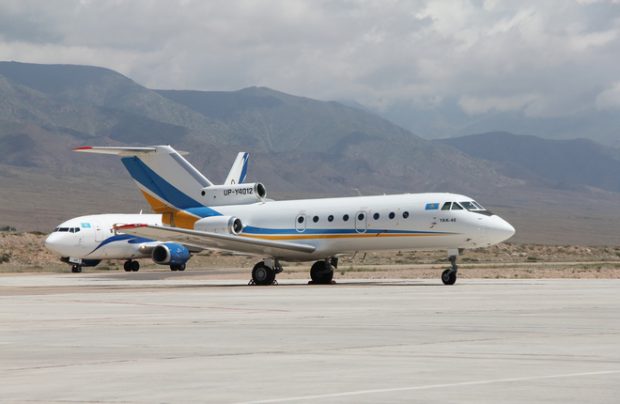 Apart from Russia, Kazakhstan has the most developed regional airline services network in the post-Soviet geographical area. More than half of the nation’s domestic flights are successfully operated on a commercial basis by more than one carrier and, of the remainder, a number are subsidised by a supportive government keen to invest in the business. Here, Russian Aviation Insider addresses the relevant Ministry in Kazakhstan – and several local airlines – to discover what is going on with regional air transportation in ‘the Land of Great Steppe’, as President Nursultan Nazarbaev dubbed Kazakhstan in 2015.

The ninth biggest country in the world, with a territory of some 2.7 million square kilometres, Kazakhstan is clearly recognising the value of a strong air transportation system.

Of all the former Soviet Union republics, Kazakhstan is enjoying the same economic development rate as in Russia, if not higher, and compared to its much less prosperous neighbours Tajikistan and Kyrgyzstan for example, the Kazakh republic’s government has been able to subsidise and promote regional flight services and facilities.

This positive status is partly the result of the 2012 liberalisation of the Kazakhstan aviation market and in particular its regional air transport services. It means that any local airline formally eligible for regular commercial domestic flights has a right to fly to any destination it likes.

According to the state news agency Kazinform, and with reference to official statistics issued by the Kazakh Ministry of Investments and Development (MID), in 2015 national carriers serviced 3.9 million passengers on domestic flights, a remarkable figure given that the country’s overall population is less than 18 million. As the total number of passengers carried by Kazakhstan airlines amounted to 5.9 million in 2015, the share of domestic transport services was as high as 66 per cent. About 60% of domestic traffic was handled by national flag carrier Air Astana, with SCAT and Bek Air experiencing the second and third best result respectively (their figures on domestic flights in 2015 are almost identical) – with a combined share of slightly under 40%. Other airlines like Qazaq Air, which started operations in August 2015, Zhetysu and Zhezkazgan Air shared less than one per cent of the market.

The MID’s press office revealed to Russian Aviation Insider that, as of December 2016, Kazakhstan had seven local air companies on the list (the aforementioned, plus Yuzhnoe Nebo) serving 42 domestic routes with a collective 455 flights per week. In the autumn of last year, Alma-Ata to Uralsk was the longest domestic flight (approximately 2,100 km) whilst Ust-Kamenogorsk to Semipalatinsk was the shortest (170 km). Officially, air connections have been established between all 14 Kazakh administrative territories as well as two cities with republican status (Almaty and Astana). The highest number of domestic flights is operated from Almaty and Astana (38% and 33%, respectively).

The most popular domestic air link in Kazakhstan is undoubtedly that between Almaty and Astana.

In December last year as many as four carriers (Air Astana, SCAT, Bek Air and Qazaq Air) operated this route. Seven destinations (including flights from Almaty to the country’s second biggest city of Shymkment) were flown by three airlines. Just two companies performed flights to 15 domestic destinations, while the remaining 19 destinations were operated by one airline only. It is worth mentioning though that passengers have a railway alternative for 80% of the country’s domestic flights.

There remains a clear division among Kazakh air companies in terms of their fleet philosophies. One group (Air Astana, Bek Air and SCAT) operates only western-built aircraft, whereas the others utilize Soviet-era aircraft, such as Zhezkazgan Air and Zhetysu (both have Yakovlev Yak-40 jets) as well as SCAT’s subsidiary Yuzhnoe Nebo (Antonov An-24 turboprops).

Since 2002 the Kazakh government has been providing subsidies for socially-critical flights from the capital city of Astana to administrative centres, with some financial support also rendered to direct flights between the regions. The MID reveals that these measures were introduced to increase the affordability of air travel.

The list of destinations approved for governmental subsidies was established “as a matter of social and economic expedience,” says the MID. “The republican and local funding has allowed airlines to gradually develop low-profit routes between smaller communities and then subsequently turn them into fully commercial operations.”

One example of the success of this philosophy came in the 2012-2014 period when increased load factors allowed the authorities to put ten previously subsidised flights onto a commercial basis, in particular from Astana to Dzhezkazgan, Kyzylorda, Kustanai, Pavlodar, Semipalatinsk, Taldy-Kurgan, Taraz, Uralsk, Ust-Kamenogorsk and from Almaty to Taraz.

Government support is continuing. In 2016 the republican budget allocated 979 million tenges of funding (approximately $2.9 million) for nine domestic flights from Almaty, Astana and Karagandy to socially-sensitive areas such as Balkhash, Kokchatav, Petropavlovsk, Urdzhar, Ust-Kamenogorsk and Kyzylorda.

Apart from providing strategic support to airlines, Kazakhstan is also investing in air space management and infrastructure development. As of today, of 18 active airports in the country with either a republican or regional status, 17 are cleared for international flights and 13 are ICAO-certified. Reconstruction works for the runway and passenger terminal at Petropavlovsk were completed in December 2016 and, later this year, the runway at Semipalatinsk will be resurfaced, whilst ongoing runway reconstruction work will be completed by 2020 at Kostanay and Ust-Kamenogorsk.