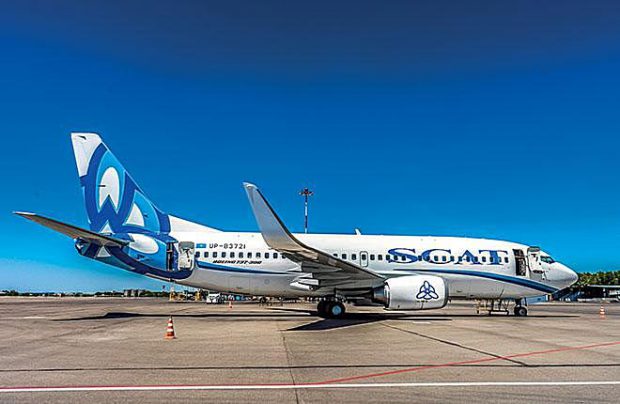 For Kazakhstan’s largest private passenger airline, the Shymkent-headquartered SCAT Airlines (which stands for Service Cargo Air Transport as it was named at its creation in 1997), 2019 is laden with surprises and new challenges. The biggest of these may be FlyArystan, Kazakhstan’s new-born national low-cost carrier (LCC), which entered the country’s currently declining domestic air travel market in early May.

Last year could well be marked as a successful one in SCAT’s logbook as, for the first time in its 21-year history, the airline’s traffic exceeded two million passengers. From 1.9 million passengers in 2017 its passenger traffic rose by some 15 per cent over the year, reaching 2.2 million in 2018, a growth rate more than double the industry average and five times higher than that of Kazakhstan’s leader and national carrier Air Astana. The state-owned airline carried 4.3 million passengers, only three per cent up on 2017. SCAT Airline’s share of traffic generated by all of Kazakhstan’s airlines increased from 26 per cent in 2017 to 28 per cent last year.

In January, SCAT told Russian Aviation Insider’s sister publication ATO.ru that its target for 2019 was to continue to improve its operational performance. However, that will not be easy to achieve now that the Kazakhstan air travel market has reversed from growth to decline, according to data published by the country’s National Economics Ministry. In the first quarter of this year it suffered an eight per cent year-on-year decline to 1.6 million passengers, whilst RPKs slipped 4.8 per cent to 3.3 billion. Complicating the situation even more, May 1 saw the launch of Air Astana’s low-cost FlyArystan operation, having won official support from Nursultan Nazarbayev, Kazakhstan’s former president and the nation’s leader. This new player will inevitably change the landscape for all other participants, although it may take some time to emerge. At any rate, the country’s only LCC’s target for 2019 is a total of 700,000 passengers, which represents an almost nine per cent slice of last year’s overall market.

The annual growth of operational figures could result from SCAT’s continuing efforts to expand its route network and adding extra capacities, the airline’s representative insists. Nevertheless, there currently appears to be no clear plan for 2019’s fleet expansion. The Kazakh airline professed its interest in the Boeing 737 MAX aircraft type when it started operating, first in Central Asia, a 186-seat MAX-8 last spring, the first of a batch of six such aircraft for which it had signed at the 2017 Dubai Airshow. That plan was put on hold in March after the worldwide grounding of the type, following two 737 MAX fatal crashes, in a span of less than five months, and now the ongoing uncertainty around the MAX is hurting the Kazakh carrier’s fleet renewal plans. The deliveries of two larger Boeing 737 MAX-9s, scheduled initially for May this year under a separate contract, have now been postponed as well due to the grounding. When signing the contract for these two aircraft in February, SCAT told ATO.ru that all of its outstanding MAX orders would be delivered before 2022. Over its two decades of business, SCAT has created a diverse network of 55 domestic and 26 international routes and is now participating in the joint effort of developing Kazakhstan’s transit potential by gradually stretching its network in three directions: linking large cities in Kazakhstan with destinations in neighbouring countries, launching flights to Europe and expanding its presence in Asia.

“The ultimate goal of these stages is to create a stable and convenient transit [system] whilst developing the tourism potential of Kazakhstan,” SCAT comments. To generate west-east flows the airline has, since 2008, been developing a network of hubs through the three Kazakhstan airports of Almaty, Nur-Sultan (formerly Astana) and Aktau, with connection times of less than six hours.

Typically, through Aktau, SCAT Airlines links seven Kazakh cities with seven destinations in Russia, two in Georgia, as well as to Istanbul in Turkey. Last year the airline launched seven new international flights from Nur-Sultan, linking the Kazakh capital with the world beyond the Commonwealth of Independent States (CIS), and also increased frequencies on a number of domestic routes. It was from Nur-Sultan that the airline embarked on its European pilgrimage in 2018, having been formally recognised as a Third Country Operator (TCO) by the European Aviation Safety Agency (EASA) a year earlier, with an inaugural flight to Vilnius. In June this year it will continue this expansion with a new route to Prague, whilst its Asian connections will be strengthened by a flight to Ulan-Bator in Mongolia.

While investing its energy into making the hub model work at Nur-Sultan, Almaty and Aktau, SCAT is not ignoring its smaller base airport at Shymkent. In 2018 this city, the largest in south Kazakhstan, was awarded the status of the City of Republican Significance and is also the candidate for becoming the ‘culture capital of the CIS’ in 2020. “All of this is urging us to improve the passenger experience [at Shymkent airport]. So SCAT has signed a memorandum with the city administration for the construction of its new passenger terminal at the airport,” says a SCAT manager. The airline expects that the rejuvenated airport will help generate additional tourism flows and create another hub linking the south of Kazakhstan with south-east Asia, Europe, Turkey and the UAE.

“Consolidation of investment, efforts and infrastructure within one city will allow us to expand the network and diversify the fare offerings. The airline will also be able to offer new travel opportunities thus enhancing the development of transit traffic through this region. Traffic through Shymkent is projected to grow from its existing 800,000 to 3.5 million passengers annually,” says the airline. Further plans include a maintenance, repair and overhaul (MRO) base and training centres, a hotel and a new catering facility.

The population of Kazakhstan is very price-sensitive regarding airfares, so SCAT Airlines is focusing on keeping them as low as possible. “A balanced pricing policy, which allows us to offer air travel to [a range of] different passenger categories is one of the important factors behind the steady annual traffic growth,” SCAT says, although the airline admits that the devaluation of the national currency is negatively affecting its business by increasing airport fees and fuel costs.

Thus the airline is trying to offset these costs by optimising its processes and boosting internal efficiency. But with LCC FlyArystan making its appearance, the day-to-day operations for Kazakhstan’s largest private carrier may become even tougher.