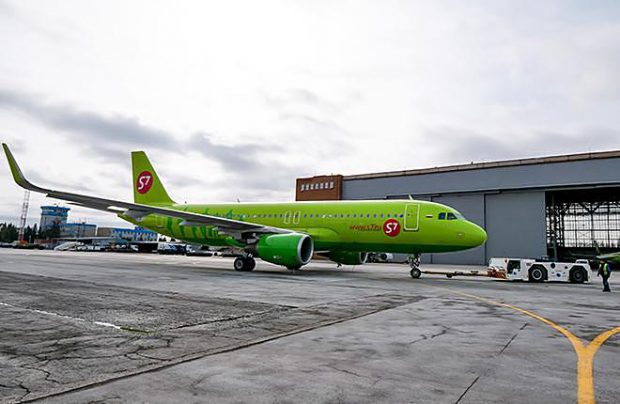 Russian Aviation Insider’s sister publication ATO.ru here offers an insight on how S7 Technics has managed to sustain a healthy business growth plan from as far away as 3,000 km distant from Moscow … and how brightly it sees its future.

In 2004, S7 Technics launched a Siberian service station at Novosibirsk’s Tolmachevo International Airport (IATA code: OVB), located at the premises of the airport’s old maintenance base. Although all serious maintenance providers need a suitable aircraft hangar, the edifice that S7 Technics inherited was more like a hangar complex. The massive structure – 137m long by 72m wide and 30m high – can accommodate up to four airliners and was built in the mid-1960s for the Soviet-era aircraft types then operated by the local aviation squad, such as Tupolev Tu-154 tri-jet narrow-body airliners and, later on, the four-engined Ilyushin IL-86 wide-bodies. Built in the mid-1960s, the hangar complex at Tolmachevo has been extensively upgraded (Alexander Listopad)

The hangar complex was originally constructed in accordance with the highest standards of the time and among those primary considerations was operating successfully despite Siberia’s harsh climate. However it was the arrival of S7 Technics that stimulated an extensive upgrade of the Tolmachevo facility, and the company is continuing to expand its capabilities there.

To be able to maintain western-built aircraft and meet EASA standards, a dozen new infrastructure upgrades have since been accomplished, such as a massive re-glazing project, with the structure’s huge roof replaced, and a floor heating system installed. “Due to the steady growth of the air travel market in Russia (which reached 19 per cent year-on-year in 2017 and is projected at 10 per cent this year – ATO) the country’s carriers are expanding their fleets, thus driving up demand for aircraft maintenance. We plan to boost our capabilities in Novosibirsk in the next several years,” an S7 Technics spokesperson has advised ATO.ru.

RULING THE MARKET BEYOND THE URALS

S7 Technics’ Tolmachevo MRO base is the largest such aircraft maintenance facility outside of central Russia, separated as it is from Siberia by the Ural mountains range. It also offers the widest network of line maintenance station connections. “That’s a proven fact. There are objective criteria, such as throughput figures, the number of staff, and annual turnaround,” the company insists. In nearly one and half decades the Tolmachevo base has accumulated substantial expertise and approvals for the maintenance of a wide range of western-built commercial airliners from Boeing and Airbus to ATR, Embraer and Bombardier. “We hold competences for maintenance, repair and overhaul of hundreds of aircraft components, and are among the first in the post-Soviet era to gain EASA approvals for component manufacturing and modifications, including design drafting,” the company further asserts.

Novosibirsk’s Tolmachevo is some four flight hours away from Moscow’s Sheremetyevo, Domodedovo and Vnukovo, the largest airport cluster in Russia, which collectively handled 47 per cent of Russia’s entire passenger traffic last year, and is home to all the largest airlines and MRO providers (including S7 Technics’ own establishment). The distance between an aircraft’s home base and its maintenance facility is clearly a significant factor, as ferry flight expenses add considerably to the overall cost of the maintenance. S7 Technics’ Novosibirsk operation therefore takes this into account, keeping it ahead of competition, especially regarding base maintenance programmes. Geographically, its nearest MRO competitors are providers in China, Turkey, Mongolia and Taiwan, which compete for and share the same customer base across the Central Asian and Russia’s Far Eastern regions.

The Siberian centre also controls the operations of three satellite stations, all of them located beyond the Urals at Vladivostok (its airport handled 2.2 million passengers in 2017), Irkutsk (almost two million) and Yakutsk (902,000). All three hold approvals of the aviation authorities of Bermuda, where the majority of Russia’s fleet is currently registered. The stations were launched one by one in response to customers’ needs for support at transit airports.

One of the ways in which the S7 Technics Tolmachevo base stands out from its Russian counterparts is the depth and range of its expertise in the provision of a panoply of services associated with modifications for western-built aircraft. That full cycle includes the development of a modification (Part 21J-approved organisation and test laboratory), the production of test prototypes (Part 21G) and the implementation of the modification on an aircraft (Part 145) as well as the provision of EASA Form 1 for new components. The company obtained its most recent approval in the summer of 2014 and since it officially introduced its full-cycle modification offer to the market in 2015, the capability has already been gratefully recognised by 23 customers. “This is certainly a unique component of our business,” the company insists. “Our experience shows that customers appreciate our turn-key solutions for cabin modifications, for example, where we can make structural changes, offer a choice of materials, test them for fire-resistance, make all the necessary purchases – and finally arrange for a convenient slot for the customer at our hangar,” the company explains, referring also to the specific example of the process of producing new passenger seat covers – from blueprint to putting them on the seats. The same principle and practice applies to individual aircraft components, built or sourced from scratch to installation, and the possibility of ordering and receiving an additional piece of the same component within a matter of days.

In all, Sibir Technic holds a dozen certificates and approvals from the relevant aviation authorities in Russia, Europe, Bermuda, Aruba, the USA and several CIS states, as well as an EN 9110 certificate, but is ceaseless in the expansion of its credentials. Typically, on the agenda are several new projects under its Part 21 approval, which include the production of plastic components (as found in seat backs, folding tables etc) by using the process of vacuum thermoforming, and the production of metal ‘suitcases’ for storage lockers, PU foam cushions and laminated seat covers.

As part of the S7 Technics holding, Sibir Technik aligns its plans with the parent’s general business development strategy. The previous five-year roadmap outlined by the parent company in 2011, helped the Novosibirsk division drive up its revenue by a factor of 2.8 times. The latest strategy targets substantial growth until 2025 and the group’s analysts have determined that one of the areas with big potential in terms of market and margin is components maintenance. “Comprehensive customer service in aircraft maintenance means maintaining not just the airframe, but also repairing specific components and units where necessary. [Having the capability to offer] such services is a serious competitive advantage,” the company notes. There are several endeavours Sibir Technics is developing in this respect, including maintenance of emergency and hydraulic equipment, and parts of electrical, communication, oxygen and fire protection systems.

To maintain pace with MRO industry developments, the company is currently implementing the Swiss Aviation Software’s AMOS solution and the corporate management system Pilot-ICE Enterprise, which is provided by Russian engineering IT developer Ascon. It is also researching laser technologies for repairing composite aircraft structures and robotics for inspection of those parts to which access is complicated.

Development plans also require bringing in more engineering and technical staff for the coming winter season, as the period between October and April is the traditional ‘hot time’ for the Russian MRO sector. Consequently, one more line has been launched in the hangar allowing for simultaneous base maintenance of four aircraft. Implementation of lean production principles is in full swing.

Last year Sibir Technic was proudly responsible for some 31 per cent of S7 Technics’ total throughput. The number of man-hours reached 635.8, showing a 17 per cent year-on-year increase and a 30 per cent improvement over the five-year period. This year the growth is projected at 10 per cent.