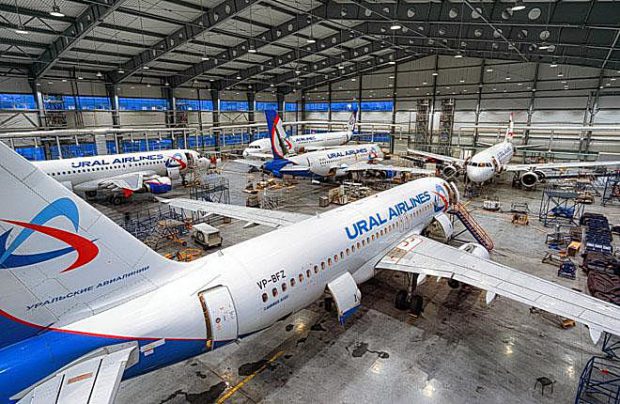 In 2011, having completely retired the old-generation Soviet-built aircraft from its fleet, Ural Airlines, Russia’s fifth largest passenger carrier, transformed its maintenance base from the former leading repair station for Antonov An-24s and An-12s, Tupolev Tu-154s and Ilyushin Il-86s into a modern aircraft maintenance centre.

In the eight years that have since passed, this division has transformed into Ural Airlines Technics, now one of Russia’s five largest maintenance service providers for western-built aircraft. The main drivers behind such a rapid change are the tripling of the parent airline’s fleet from 14 Airbus A320s in January 2011 to 45 in July 2019, and the opening of a new hangar complex at its Yekaterinburg’s Koltsovo airport base into one that is capable of simultaneously handling five aircraft, compared to the original hangar’s capacity for just one.

Having expanded its capacities, Ural Airlines Technics then started adding new capabilities in Airbus A320 maintenance and component repairs so that now the company is capable of fully supporting its parent airline’s fleet whilst also offering services to other carriers. During the recent spring season it became one of the first in Russia to complete re-delivery checks on an aircraft owned by a western leasing company.

ATO.ru: What are the ‘bullet-points’ of Ural Airlines Technics’ strategy for the future?

I.P.: Our current strategy includes mastering the Boeing 737, which is a new type for us, then expanding our capabilities in servicing components and structural elements at our new facility and, finally, building more line maintenance stations in Russia.

So, above all, our primary goals are: firstly, learning airworthiness procedures for the new type and setting up the complete engineering cycle to cater for the planned operation of these aircraft by Ural Airlines and, secondly, bringing our share of maintenance operations on our parent airline’s fleet to 85 per cent, which is a reasonable figure because there are some procedures which are better off being outsourced, such as line maintenance at airports where we don’t have our own line stations.

We also aim to attract more third-party customers to our line stations for our base and line maintenance services – in addition to those contracts we already have. And, finally, we are determined to reduce the airline’s costs for component maintenance by launching dedicated in-house facilities at our Koltsovo base. Igor Poddubny, technical director of Ural Airlines and head of Ural Airlines Technics, joined the airline in 2000 after graduating as an aircraft and engine engineer from Samara State Aerospace University (Artyom Korenyko / ATO.ru)

АТО.ru: In which direction is the Russian MRO market heading – and your company, in particular?

I.P.: In the Russian MRO industry we are observing a tendency towards an increasing shortage of capabilities for western aircraft maintenance and, at the same time, the component maintenance sector is seriously underdeveloped. Therefore most airlines are resorting to spare parts inventories outside Russia. So, basically, developing in any direction would yield good results because the needs of airlines are growing. Furthermore, the staff training market for different types of aircraft is also in poor shape. It is obvious that the existing training centres cannot fully satisfy the demands of Russian maintenance organisations. Therefore I cannot say that our company is currently moving ahead by leaps and bounds, but it is moving in the right direction.

ATO.ru: What feeds your optimism about the Russian MRO market?

I.P.: Well, the industry has become more flexible. Now that Russian commercial aviation has accumulated the experience of operating western-built aircraft and of dealing with aviation regulators, lessors, service and parts providers in the international environment and on a global scale, the Russian maintenance industry has managed to create a network structure of relationships both inside Russia and also with external aviation markets. I can’t say that this structure has completely replaced the [mighty] one that existed in the Soviet Union, but it is different, a thoroughly modernised system that supports the safe and efficient operation of the western-built fleets of Russian airlines. And despite numerous issues, this structure is constantly evolving. A shortage of qualified staff is one of the main obstacles holding back the development of the Russian MRO industry (Artyom Korenyako  / ATO.ru)

ATO.ru: And what is it that concerns you the most?

I.P.: Our dependence on European and American suppliers of equipment, materials and certain services, including training. I do not believe that they are better than what we have in Russia, but ownership rights preclude us from creating full-scale in-house capabilities, independent of western providers, for engine maintenance, for example. This is a major restriction. And the maintenance costs are inordinately high – even though in engine maintenance, for example, there’s nothing extraordinarily complicated … as with any type of maintenance, basically, if you learn the ropes properly.

In terms of Russian ground equipment and maintenance tools, there must be a set of requirements and assessment criteria, but there shouldn’t be a monopoly for its production and sales.

The training and motivation of engineering and technical staff is a weak spot. We seem to have digested all these innovations with bachelors and masters (the switch from the Soviet five-year education system to Bologna Convention – ATO.ru), but the level of training still leaves much to be desired. Most importantly, the period of on-the-job training required by Russian regulations is not good at all. It takes years, unjustified, and it robs trainees of all motivation and enthusiasm for their jobs. Instead, what we need is a more balanced approach to staff training, with considerations for the specifics of the job and the levels of responsibility of different positions, with a deep understanding of the processes and technologies that they have to deal with.

АТО.ru: How would you assess the existing volume of the Russian MRO industry and your share of it?

I.P.: Objectively, there are no existing statistics on the volumes of the aircraft maintenance industry in our country. They existed in the Soviet Union when it was necessary to evaluate the efficiency of all maintenance bases and aviation repair plants that made up the system of Aeroflot, the only air travel service provider in the USSR, when it was the responsibility of a dedicated unit within the ministry of civil aviation. But this is in the past and now we have nothing to base our own evaluation criteria upon. I could take the performance figures of our own production facilities as a standard, but that would be wrong because, obviously, the working conditions at maintenance bases across Russia are now very different.

I cannot take upon myself the task that should be undertaken by the state, so it is challenging to evaluate the volumes of the current Russian maintenance market. If I tell you that, in the maintenance segment of western-built aircraft between 70 and 110 tonnes maximum take-off weight (MTOW) we’re number three, or number five, or number 10 – that will just be a speculation. Naturally, I would myself be thrilled to get the expert assessment of our company within the Russian commercial fleet maintenance system – but it’s more of a curiosity, a sporting interest. What is more vital is the assessment of the economics, the quality and the production efficiency as an indication of our capability to stay afloat, and continuing development according to the needs of our airline customers. This is more important than the scales. So maybe that’s why there’s no market volume statistics.

ATO.ru: In 2019 Ural Airlines Technics completed its first re-delivery check. Is that something of which you would like to do more?

I.P.: That’s right, we re-delivered our first two A319s in March and April this year. The checks were done at Koltsovo, the aircraft were owned by AerCap and were delivered to Spanish airline Volotea. In my view, the results are great, especially for our first such operations. Works were completed in two and three months, including the removal of corrosion and subsequent airframe painting. So if we find [new] customers for re-delivery checks, then we’ll take them. And of course, we will do all of Ural Airlines’ aircraft – there’s one scheduled for the end of this year and several more re-deliveries planned for next year.

ATO.ru: What are your plans for new facilities?

I.P.: A new dedicated facility for component repairs will be launched in August. And regarding the new hangar, we’re still at the stage of defining the location for it. ATO.ru: We have heard that you’re getting ready to certify your own training centre for engineering and technical staff according to EASA Part 147 standards. When do you hope to obtain this approval?

I.P.: We have successfully completed the EASA Part 147 audit and are now waiting for the certificate. This activity was carried out at our existing facilities. But they are quite limited, so once we launch the new facility, where we’ll have large classrooms, we’ll start the certification process for Russian FAP-289 as a recognised aviation training centre.

АТО.ru: You mentioned the Boeing 737. What modifications are you talking about?

I.P.: Since Ural Airlines is expecting the delivery of Boeing 737 MAXs, all the engineers at our airworthiness department have now familiarised themselves with the type. Furthermore, our specialists have taken turns to visit Seattle for hands-on experiences with the aircraft in compliance with our agreement with Boeing and our internal programmes.

The technical department is currently studying both the Boeing 737NG and the Boeing 737MAX and, by the end of July, we’ll complete their training and apply for an extension with EASA, because that’s when we expect to receive the full documentation for the aircraft. Everything else is ready. ATO.ru: Finally, what share of your current activity is for third-party customers

I.P.: The numbers remain largely the same, but there’s a change quality-wise. Firstly, we have increased the volume of works we do. Last year the increase was 17 per cent, and this year we grew by 25 per cent, year-on-year. Secondly, we have shifted from largely on-call operations and unscheduled maintenance to more heavy checks. At the end of last year we started offering scheduled maintenance operations to third-party customers. Our first such C-check was a six-year check for Red Wings Airlines. We did one more C-check in the first quarter of this year.

And, during the summer, we’re doing regular A-checks for third-party operators, which we haven’t done before. For us this brings growth to a new level, and we plan to continue in the same way. We’ve already won several contracts for the coming winter season and, once the new facility is launched, we’ll start offering component repairs and airframe painting too.