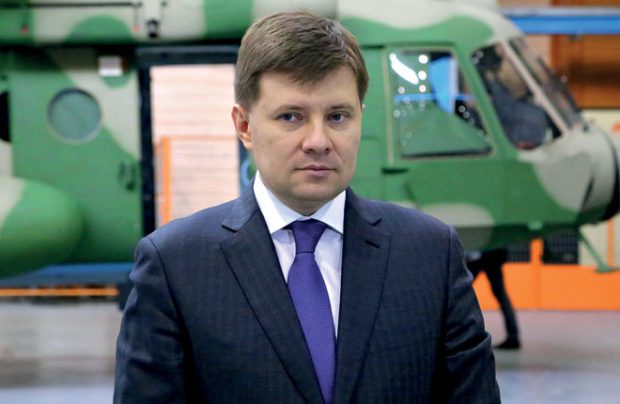 Products by Russian Helicopters take up a sizable portion of MAKS 2017’s static display. CEO Andrey Boginsky told Show Observer about the rotorcraft the company is presenting at the exhibition.

— Russian Helicopters has been mainly delivering its products as part of the national defense order in the past few years. How will this situation change under the new government armament program?

— We will certainly continue with helicopter deliveries to the Russian Defense Ministry. However, as the Russian Aerospace Forces [abbreviated to VKS in Russian] continue with their rearmament effort, their procurement volumes will naturally shrink. Now that we have successfully completed the greatest part of the Russian Defense Ministry’s current order, we need to secure new contracts for those of our enterprises which were previously focused primarily on manufacturing helicopters for the VKS.

— Which foreign countries are your primary customers at present? How have your exports changed over the past few years both in terms of the products you sell and the countries you sell them to?

— Our long-standing customers are China, Egypt, India, Indonesia, Thailand, Vietnam, and other countries in the Middle East, Asia Pacific, and Latin America. In the years to come we will expand our list of export countries, primarily thanks to having our new models such as the Kamov Ka-62 certified in Europe. As for the structure of our exports, the global demand for military rotorcraft, and also for heavy and medium-lift helicopters, is decreasing. We are being proactive and promoting those models which we believe will become popular in the future.

— Which of your products will you be using to increase the share of civil helicopters in your total output? How many examples of the Mil Mi-171A2, the latest member of the Mi-8 family, is Russian Helicopters planning to sell? Are you expecting any civilian orders for the Mi-38?

— We are working consistently to expand and upgrade our civil product line, and are running several interesting projects at once. The Kamov Ka-62, which first flew in may this year, has an immense [sales] potential. This helicopter fits into the 6- to 7-ton MTOW segment; we have never built aircraft for this niche before. We have launched a marketing campaign for the Ka-62, and there is interest from both Russian and foreign operators.

In the light segment, our greatest hope is the Ansat, which was developed and has entered series production at Kazan Helicopters. This aircraft has a special role in the program to develop Russian air ambulance services. The first operator of the medevac version is the Health Ministry of the Republic of Tatarstan. In a separate development, in May this year, we delivered the first of six medevac Ansats under a contract with the GTLK State Transport Leasing Company. This helicopter has already entered service in Russia’s Volgograd Region. The remaining five airframes will be delivered before the end of the year.

It is as yet too early to discuss potential sales of the Mi-171А2, but we are observing significant demand for this model. Our subsidiary Ulan-Ude Aviation Plant is completing assembly of the first production airframe; three more aircraft are at varying stages of completion. The four helicopters will be delivered by year-end. The Mi-171A2 could also be used in offshore projects.

Speaking of the Mi-38, we are planning to demonstrate the helicopter both on static display and as part of the flying display program at MAKS 2017. Both Russian and foreign operators are interested in this aircraft. We have a number of talks lined up, and we hope that these will result in deliveries.

— When is Russian Helicopters planning to have the Ka-62 certified? Are you going to replace its foreign-made components with Russian equivalents?

— We aim to have the Ka-62 certified in Russia by late 2019, and to have the certificate validated abroad by late 2020. The fact that the helicopter incorporates a number of certified imported components, such as the Safran Ardiden 3G engines, will certainly help us with EASA certification.

On the other hand, some foreign-made components could be replaced with locally sourced equivalents at the customer’s insistence, provided we have a steady flow of domestic orders for the model. For example, we could offer a Russian engine, whose technical specifications have already been developed. The transmission could also be replaced. In addition, work continues as part of the government’s imports substitution program to develop a number of systems and assemblies locally, including crash-resistant fuel systems.

— What new developments are you bringing to MAKS 2017?

— We are premiering the Mil Mi-171Sh-VN, which is an upgraded military transport, and also the Mi-8ATM convertible, whose cabin can be switched between cargo, passenger, and VIP within several hours. Our subsidiary VR-Technologies is debuting its VRT500 light multirole helicopter and the prototype of the VRT300 Arctic rotary-wing UAV, which is intended for ice patrols along the Northeast Passage.