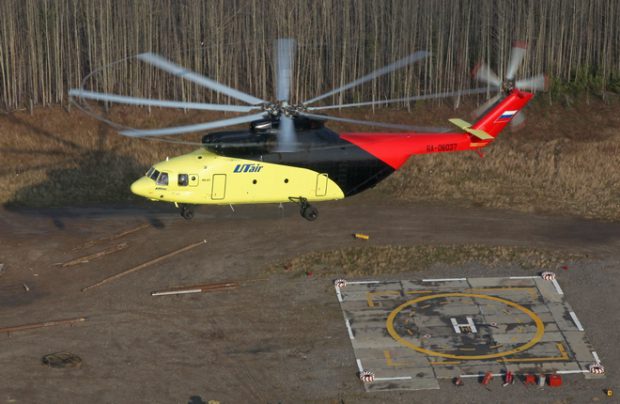 The 2015-2016 economic crisis in Russia has affected both domestic demand for helicopter operations and commercial operators’ fleet renewal plans. Falling oil prices, coupled with a weak national currency, are spurring competition and bringing market players’ profitability down. As an added pressure, unmanned aerial systems are becoming an increasingly popular alternative to rotary-wing aircraft.

The active Russian commercial helicopter fleet shrank 9% year-on-year, to 873 airframes in 2015, with the number of Western-built aircraft declining 5%, to 117. Of the 25 rotary-wing types operated in the country, only five were delivered in any numbers last year: the Airbus Helicopters H120, H135, and H155; the Leonardo Helicopters (previously known as AgustaWestland) AW109; and the Bell 407.

“Things are getting worse by the year,” says Maxim Korovyansky, deputy general director at Krasnodar-based freight helicopter operator PANH. “The Russian market has shrunk, and our [Mil] Mi-26s have been idling for more than a year now. Our overdue accounts receivable are mounting, so we are now asking our clients to pay upfront. The UN has also started ordering less work lately. Components for Russian-built helicopters are becoming more expensive, even though this growth has not been as dramatic as the increase in the dollar exchange rate. Some parts suppliers have taken to revising their prices once a quarter, rather than once a year as they used to; some, like the Moscow Machine-Building Plant Vpered, now price their products in dollars and quote the ruble equivalent depending on the exchange rate of the day.”

Virtually all the helicopter operators are reporting a rise in competition. Vyacheslav Ilyushin, a member of the board of directors at the Murmansk-based airline Arktika, says rival helicopter services providers from other Russian regions have started coming to the Kola Peninsula as orders are becoming scarce in their parts.

Against the backdrop of seasonal peaks and troughs in firefighting contracts, the sluggish revival of the medical aviation sector, and customers’ switching from helicopters to fixed-wing operations for their scheduled passenger transportation needs, the Russian energy industry has long remained the primary driver for the rotorcraft sector. But then, in 2016, it started showing signs of recession too.

“Major energy clients are streamlining their costs,” says a source at a Far Eastern helicopter operator. “Some are cutting down on the frequency of personnel rotations, other are increasingly choosing alternative modes of transportation. The sector is trying everything to cut costs, the oil and gas guys have it hard themselves.”

Large-scale offshore projects, primarily in Russia’s northern seas, were once expected to boost the helicopter sector. Now, however, it appears that these ambitious plans have been put on ice. Most of the major offshore efforts have been mothballed because of the international sanctions imposed on Russian oil-and-gas companies. In addition, the low oil prices are not conducive to speeding up offshore production. Experts believe such projects will only become feasible again when oil starts trading at the minimum of $80 per barrel, something they say is unlikely to happen in the next three to five years.

The helicopter sector’s only current hope is a government program that has been implemented to develop the Arctic regions’ social and economic sectors through to 2020, which was adopted in April 2014. Operators based in Krasnoyarsk Territory, for example, are already witnessing a revival in demand in the north of the Taymyr Peninsula, where oil-and-gas majors Rosneft and Lukoil are developing new fields.

According to the Transport Clearing House, the combined operational flying time of the Russian commercial rotorcraft fleet is on the decline for the third year in a row; it reached a five-time low in 2015, at just shy of 410,000 hours (8% down from the 2014 level).

This situation is affecting businesses serving the helicopter market. UTair Engineering, Russia’s leading helicopter MRO provider, reported a 21% year-on-year drop in workload in 2015, down to 2.54 million man-hours. The management blames the ruble’s depreciation, fewer hours flown by helicopter operators, and a slowdown in deliveries of new Western-made aircraft. In some instances, the weak ruble is giving Soviet-made types a new lease of life (Photo by Leonid Faerberg / Transport-Photo.com)

Deliveries have also shrunk due to the recession. Even though the country’s largest rotorcraft manufacturer, state-run Russian Helicopters, mostly sells to government agencies, its nosediving domestic sales are still illustrative. The corporation delivered 212 new airframes in 2015, 59 fewer than the year before, and its firm orders shrank 9.5%, to 494 units.

Depreciation of the national currency has also resulted in fewer Western-built aircraft being delivered to Russia. US light helicopter specialist Robinson delivered just 11 last year, or eight times fewer year-on-year. Airbus Helicopters saw its deliveries to Russia halved to 11; Leonardo Helicopters delivered just four, or half the 2014 figure. Bell Helicopter achieved a 37.5% rise in deliveries with 11 airframes. Overall, Russian customers received a total of 37 foreign-made rotorcraft last year, or nearly 70% fewer than in 2014.

Despite this, the share of revenue hours flown by Russia’s entire foreign-built helicopter fleet continues to grow; in 2015, it stood at 11.5% of the overall rotorcraft operational flying hours flown (against 10.2% in 2014). On the other hand, some types, including Russian-built ones, have been experiencing particularly low demand. The lion’s share of helicopter operations last year was performed by the most ubiquitous, time-tested earlier modifications of the Mil Mi-8 family (71.5%, against 68.3% in 2014).

“The [newer] Mi-8MTV is significantly more expensive in operation than the Mi-8T, so customers increasingly prefer the latter,” says Dmitry Borisenko, managing director at Helicopter Service Company. “On the other hand, there is also a reverse trend of some customers refusing to put their personnel on board aircraft that are older than 25 years.”

Industry sources indicate that major Russian customers are urging operators to renew their fleets. Rosneft’s requirement to provide helicopters at 25 years or under is expected to lead to significant reductions in the active Mi-8T fleet in 2017. PANH has already been forced to replace the type with EC135s under its current contract with Caspian Pipeline Consortium.

“The requirement to migrate to newer Mi-8 versions will prompt operators to hike their prices nearly twofold,” says a senior manager at a top-ten Russian helicopter company. “The problem is that everyone demands new equipment from us but nobody wants to pay for it. In the current situation, operators cannot afford to invest in long-term fleet renovation programs.”

On the other hand, it appears to be too early to get rid of the older helicopters. This past spring, Russian regional operator Komiaviatrans re-mothballed one of its Mi-2s upon finding that the constant fluctuations in the ruble exchange rate are making foreign-built types less cost-efficient than the aged Soviet design.

Still, Russian medium-lift helicopter fleets will need to be replaced sooner or later. It is quite possible that customers will have to contribute to these efforts, seeing as operators themselves are hardly in a position to do this on their own under the circumstances.

“It is for the customers, with their significantly greater disposable finances, to decide whether they should choose the way of [Russian gas giant] Gazprom, which set up its own subsidiary aviation arm with new aircraft, or that of Rosneft, which purchases its aircraft and then runs a tender to choose a third party to operate them for it,” says an industry source. “There is a third way. Say, a company runs a contest among operators; the winner gets a five- to 10-year contract, the condition being that it will have to buy a brand-new helicopter. The contract is, in essence, a certain guarantee against the operator’s lease deal. This appears to be the optimal variant, because the lessee can use that same helicopter to serve its other customers with smaller budgets.”

One example of the trend towards phasing out the older Mi-8 versions is the Naryan-Mar aviation enterprise (НМОА), the biggest helicopter operator in Nenetsk Autonomous District, Northern Russia, which has around a dozen Mi-8Ts. This fall, HMOA is planning to receive its first new helicopter in 25 years, an Mi-8MTV-1, under a financial lease contract with Sberbank Leasing.

“We operate obsolete, Soviet-built Mi-8s, which makes our further development as a company impossible,” explains НМОА Commercial Director Yakov Menshakov. “This is why we are planning to continue with our fleet renewal efforts. However, new helicopters are too expensive for us to lease, even under preferential contractual terms. This is a common problem for all operators. Therefore, we need the government’s help.” HMOA is happy that rotary-wing aircraft are covered by the government resolution on state subsidies towards operators’ lease payments.

Another factor affecting the sector is that demand for helicopter services is being transformed by the growing unmanned aerial vehicle (UAV) market.

“Some types of work previously performed by helicopters, such as pipeline patrols, forest fire monitoring, and so on, will be increasingly delegated to UAVs,” says Borisenko, of the Helicopter Service Company. “This is already beginning to happen. How promptly the changes will come is hard to predict. It is clear that UAVs will be unable to replace helicopters entirely. They cannot do wood logging; so far they cannot even carry freight or passengers. But they are several times cheaper to operate than helicopters and they are safer.”

Virtually every helicopter operator is now facing the dilemma of warming to UAVs or continuing to ignore them. One company that has adopted UAVs rather early is Nizhnevartovskavia, based in Khanty-Mansiysk Autonomous District. Nizhnevartovskaia has around 30 Mi-8s in different modifications, and it has been operating UAVs since April 2015. The company currently has two, designed and built by Izhevsk-based Unmanned Systems. These vehicles have helped the operator tap into the aerial monitoring market.

“Wet-leasing a helicopter for a day will cost you slightly over 1 million rubles [$15,400 at the current exchange rate],” says Mikhail Sirotkin, CEO of Gazprom subsidiary Krasnoyarskgazprom. “A UAV is four times cheaper. On the other hand, the helicopter is faster, it can cover a greater area or patrol a longer pipeline stretch over the same period of time. Still, at the end of the day the helicopter is around twice as expensive to hire as the UAV.” Sirotkin does concede that UAVs cannot beat helicopters in certain scenarios such as mountainous operations, patrolling pipelines over 100 km in length, hauling heavy underslung equipment, or when landing a field repair team is part of the mission.

“In our region, UAV operators started serving oil companies three years ago,” says Oleg Metelitsa, deputy general director at Nizhnevartovskavia. “They patrol pipelines. Using a Mi-8 for this role is too expensive, so we do not even bother to offer our services. Some customers still rent Mi-2s, but UAVs come out much cheaper. Unmanned systems are the future; there is no doubt about that. It is too costly pleasure to have an observer in a helicopter monitor your pipelines.”