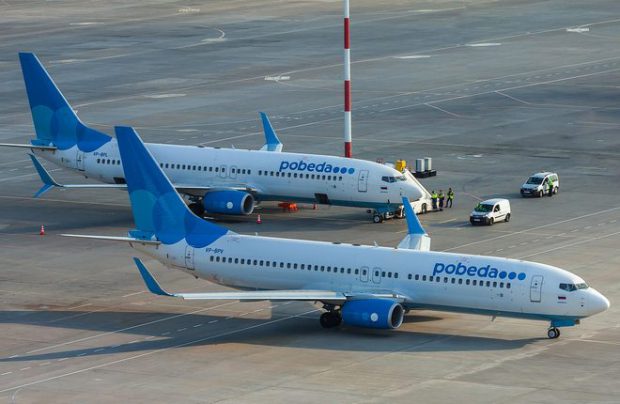 Within four years, Pobeda is expected to triple its fleet and its traffic numbers (Pobeda Airlines)

Pobeda, Russia’s only low-cost carrier (LCC), is poised to become the country’s second largest airline by the end of 2023, according to details contained in a strategic plan issued by its parent Aeroflot Group and presented at Capital Markets Day in London last week. Within just four years, Pobeda is expected to triple its traffic numbers to anywhere between 25 and 30 million passengers, whilst almost tripling its fleet to a total of between 80 and 85 aircraft.

THE BATTLE OF TRAFFIC VOLUMES

Pobeda’s aggressive development is part of Aeroflot Group’s strategy up to 2023 in which the Group intends to double its collective traffic numbers to hit the 100 million passengers mark and launch new regional hubs at Novosibirsk, Yekaterinburg and Sochi, and a Siberian international transit hub at Krasnoyarsk.

Pobeda is assigned to perform a discreet role in the drama; acting as the budget carrier tasked with generating the bulk of the group’s traffic growth, boosting its share in the group’s combined results from the current 16 to 30 per cent.

At the same time, the same Group presentation also indicates that the traffic prospects of Aeroflot’s other big subsidiary, Rossiya Airlines, are somewhat vague – from 11.1 million passengers in 2018 it may grow to reach 15 million, or slide to 10 million. In the meanwhile, Group member Aurora Airlines, which operates in the far eastern region of Russia, is expected to double its passenger numbers to three million, whilst title carrier Aeroflot is targeting a 1.5-times growth factor to 52 million passengers in the period.

Pobeda currently operates 30 Boeing 737-800s and ranks fourth in the list of leading Russian airlines, surpassed by Aeroflot, S7 Airlines and Rossiya. In the first 10 months of 2019 it transported 8.5 million passengers, a 45.2 per cent year-on-year improvement and, by the end of the year, its traffic total is expected to have reached 10 million passengers.

According to these estimates, should Aeroflot’s master plan materialise, within four years Pobeda will claim second place in the ranking, outperforming not only sister airline Rossiya, but pushing Russia’s largest privately run carrier S7 Airlines from its current silver medal position. The latter, having recently consolidated with its sister airline Globus, is projected to serve 18 million passengers this year, up from 16 million in 2018. In the last four years, S7 Airlines’ traffic growth rate has averaged roughly 13 per cent. If it continues at the same pace, with its current fleet of 95 aircraft, by the end of 2023 its traffic should reach 29.5 million passengers, the same as forecast for Pobeda.

Speaking from the sidelines at the Wings of the Future 2019 forum in October, S7 Airlines’ commercial director Igor Veretennikov told Russian Aviation Insider that the Group has never been eager to fight battles for passenger volumes. Instead, the members’ traffic growth is the result of fleet renewals and expansion as well as improvements in aircraft operational efficiencies.

Since December 1, 2014, when LCC Pobeda operated its first commercial flight, the airline has been demonstrating remarkably high levels of traffic growth, which slowed just once, in 2017, when Pobeda put a brake on its aggressive network expansion. During that time it added only four aircraft to its fleet.

Below are the basic operational and financial performance indicators of Pobeda Airlines from 2014 to 2019 (sources: Rosaviatsiya, Aeroflot Group)

According to the company’s data, 68 per cent of all of Pobeda’s passengers are in the age segment between 25 and 44 years, and 58 per cent are female. More than half of its passengers have used air travel for the first time, eschewing rail and road transport options, Pobeda claims.

In 2019 it launched 13 new routes from Russian regions, seven of them from Aeroflot Group’s future regional Sochi base. In its 2019 IATA summer schedule the network covered 108 destinations, including 67 domestic routes. Aeroflot Group’s combined network consists of more than 300 routes, 62 of which are unique to Pobeda. The LCC’s regional network development will continue until 2023. It will also work on expanding its coverage from its Vnukovo, Moscow main base.