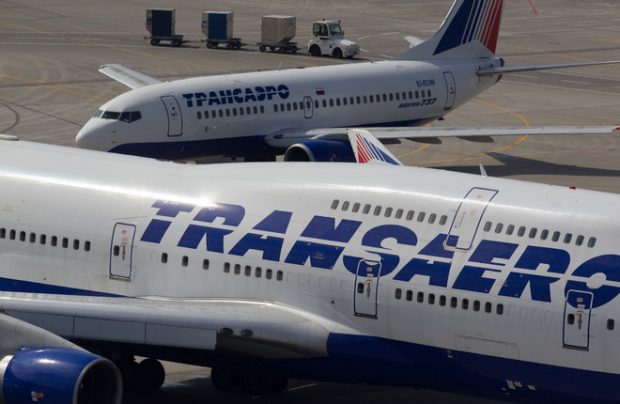 99 aircraft out of Transaero’s 103 strong fleet were on lease (Photo by Leonid Faerberg/Transport-Photo.com)

Russia’s beleaguered aircraft leasing business, which was dealt a major blow by the 2015 collapse of Transaero Airlines, its second largest customer, is unlikely to recover in the near-term as leasing companies far and wide feel the full force of Russia’s distressed aircraft financing market.

Although western lessors suffered the least from the fallout from Transaero’s implosion in October last year, with just 12 foreign companies owning 33 of the Russian firm’s 103 airliners, it is not surprising that sources at international leasing companies operating in Russia insist that their presence in the country is systematically being curtailed.

As a result, there are virtually no new deals involving foreign companies currently scheduled and once an earlier lease contract has expired in Russia, the aircraft is likely to be re-targeted at a different market.

Foreign companies’ exposure to the Russian market left each of them with an average of less than three airframes leased out to Transaero even though one lessor, AerCap, had delivered 10 airliners. At present, 17 of these aircraft are in service with new operators; 16 airframes, no more than two per lessor, remain unassigned.

By way of contrast to this downwards trend, China’s ICBС Leasing, which has now delivered two of its four ex-Transaero A321s to Aeroflot, with a second pair to be delivered shortly, remains the only example of an international leasing company contracting a Russian customer for airliners previously operated by Transaero.

With foreign lessors projecting that the size of their business with Russia will remain largely in line with the expected risks, the far-reaching consequences of Transaero’s demise on the country’s leasing market cannot be understated, with the defunct carrier owning just four of the 103 aircraft in its fleet and the rest all on lease, with a further 71 aircraft on order – including options.

After the collapse, lessors were left scrambling to retrieve and restore their aircraft to airworthiness, as well as finding new operators. This process also applied to Russia’s three largest leasing companies: Sberbank Leasing, VTB Leasing and VEB-Leasing.

These lessors have declined to comment on the sad situation and the only way to discover the fate of their Transaero aircraft is by tracking factory numbers in databases used by international leasing companies. Sberbank Leasing’s four ex-Transaero B747s are now with Rossiya Airlines (part of the Aeroflot group); and one B767 and one B737 have been leased to VIM Airlines; leaving just two B737s (a -500 and an -800) still with the lessor.

In the next few months, Sberbank is due to take delivery of the 11 B737-800s ordered by Transaero. One of these has already been sold to the Mexican Air Force; the other 10 are provisionally earmarked for Aeroflot, possibly to be operated by the Russian carrier’s subsidiaries.

The other two major Russian lessors VTB Leasing and VEB-Leasing have found themselves in a more challenging situation, as greater numbers of their aircraft were operated by Transaero. Of VTB’s 24 units, three B747-400s and two B777-300s have been delivered to Rossiya and two B737-500s sold to foreign carriers.

But the company has yet to find new operators for its four B747-400s, three B777-200s, four B767-300s, four B737-500s and a single B737-800. VTB is currently working hard to re-market these airliners and is looking at various options, such as leasing one of its aforementioned B737-500s to Iran Airtours, an airline based in Tehran whose parent company is Iran Air.

Rival lessor VEB’s Transaero fleet stood at 36 aircraft although, since October this year, the lessor has delivered one B747-400 and three B777-300s to Rossiya, whilst two B737-500s have been handed over to Russia’s VIM-Avia. VEB is engaged in a re-marketing campaign for the remaining aircraft: one B737-300 is now with Iran’s Taban Air and two B737-400s in the possession of Lithuania’s Grand Cru Airlines. Both deals were agreed via Ireland-based firm Transalpine Leasing Ltd, which used to be owned by Transaero.

Another major Russian lessor Ilyushin Finance (IFC) was virtually unaffected by Transaero’s closure. The carrier had operated two IFC-owned Tu-204-100S freighters, but the company managed to find a new customer fairly quickly for these: in June of this year the cargo aircraft were taken by the Russian state-operated postal service which, in the next few months, is expected to start operating scheduled freight services to Siberia, the Far East, and East Asia.

IFC has also successfully re-marketed the six Antonov An-148s which had been phased out by Rossiya, the St Petersburg-based subsidiary of Aeroflot Group. Four of these are sub-leased to Saratov Airlines; the first regional jet has already been delivered and the other three will be ferried there before December. IFC has declined to comment on where its remaining two An-148s will go.

This year, the company has delivered to a Russian government customer the second of the two Ilyushin Il-96-400 widebodies on order and has also signed an agreement to deliver a single An-124-100 heavy lifter to Azeri carrier Silk Way Airlines. It also has a preliminary agreement with Azerbaijan Airlines to deliver 10 next-generation MC-21-300 airliners in 2019-20.

The Russian lease company is currently investigating other potential foreign customers for the MC-21, as well as the Sukhoi Superjet 100 regional jet, according to industry sources, and has also restructured its CSeries contract with Bombardier, bringing the original order down to just 20 of the type.

In a separate development, the lessor will receive a single Bombardier Q400 turboprop by the end of this year, and has an option for five more to be firmed-up in 2018.