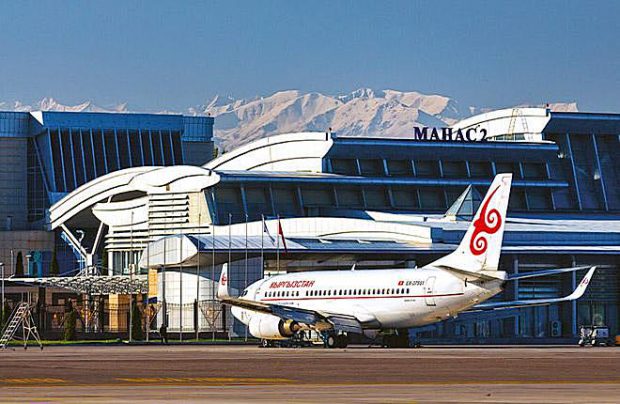 Passenger numbers through Kyrgyz airports declined by 2.4 per cent in 2018 (Manas International Airport)

Kyrgyzstan, one of the smallest air travel markets in the CIS, is on the brink of some far-reaching changes as a result of the country adopting an open-skies regime effective from January 25.

Last year, the country’s airports collectively handled some 3.5 million passengers (down by 2.4 per cent on 2017) and the business of local airlines, already experiencing financial difficulties, will be further affected by this liberalisation.

Alterations to the country’s aviation policy – in respect to fifth-freedom traffic rights – were approved on January 11 by Kyrgyz president Sooronbay Zheenbekov.

The change means that foreign airlines are now entitled to carry passengers, baggage, freight and mail on flights from Kyrgyzstan to third countries (outside their origin) and back. Thus the country has joined those other CIS members that have opened their skies. However unlike, for example, Armenia and Georgia, Kyrgyz carriers are disallowed from operating to European destinations.

Officially, the aim of this significant measure has been described as the “development of [the country’s] civil aviation, increasing passenger and freight traffic, as well as making international air travel more accessible to both the citizens of Kyrgyzstan and to foreign tourists by unilaterally introducing the open air policy and fifth-freedoms in the country.”

In December, the Kyrgyz parliament’s press service released a note about the approval of the air code amendments. It revealed that, during discussions, the members of parliament “generally supported the new regulation,” pointing out that the competitive environment will spur the development of civil aviation. Along with that, though, they also expressed concerns that it will have “a negative effect on Kyrgyz airlines, whose obsolete fleet does not allow them to compete with [foreign] carriers operating modern airliners.”

The disquiet of the lawmakers is understandable. Kyrgyzstan has no strong carriers, even by CIS standards, and Air Kyrgyzstan, the state-run national carrier, remains in a wretched condition. Furthermore, even though the privately-owned Air Manas, which was founded by Kyrgyz businessmen and is supported by Turkey’s Pegasus Airlines, passed IATA’s operational audit (IOSA), it has still not lived up to its ambitious fleet expansion plans. Air KG, a subsidiary airline of Manas International Airports, the state-owned operator of all of the country’s airports, has been unable to renew its fleet.

The only local carriers showing some signs of development are the current market leader Avia Traffic Company, which carried 671,400 passengers in 2017, and its partner Tez Jet (150,000 passengers in 2017), both of which added aircraft in late 2017 and early 2018.

A representative of Avia Traffic Company gave a very emotional response to Russian Aviation Insider’s December questions regarding the open-skies initiative. “We are against the fifth-freedom [decision]. It’s our government that wants to do it. What’s more, they want to do it unilaterally and so anyone [from outside] can just fly in. There will be no protection of the interests of the Kyrgyz carriers.” Taalaybek Okenov, the former president of the Kyrgyz Air Operators Association, is also critical of the government’s decision. In an interview with Fergana newswire he pointed out that “just because we imposed that regulation, Singapore Airlines or Japan Airlines won’t start flying here. Large airlines fly where there’s a market [demand], not where there are open skies. And our [civil] aviation hinges on migrants – the flow of tourists to Kyrgyzstan is minuscule.”

Okenov believes that liberalisation of the local air travel market will further jeopardise the business prospects of Kyrgyz airlines – which are already on the European black-list – and have never received any support from the state. “There were two Kyrgyz carriers operating flights to Istanbul before they were pushed out of the market when [rival] Turkish Airlines introducing low fares. [After that] this airline then raised the fares again and the fares only went down again when another [Turkish] airline entered the market. I don’t rule out [the possibility] that the [overall] effect [of this decision] will be the opposite to what the government has promised in terms of cheaper tickets.”

Nevertheless, hopes remain that the open-skies regime is capable of stimulating the Kyrgyz air travel market – which is currently in decline. Armenia and Georgia, which opened their skies earlier, have both experienced increases in traffic numbers through their airports and local authorities, in their interviews with Russian Aviation Insider, have highlighted the positive effects of the development on their respective industries. However, it is also true that both Armenian and Georgian airlines are continuing to struggle to survive, even though they are not restricted from flying to Europe. So, evidently, the status of Kyrgyz airlines’ in their main target market of Russia will be further aggravated, primarily through the further tightening of competition from their more powerful Russian rival airlines.