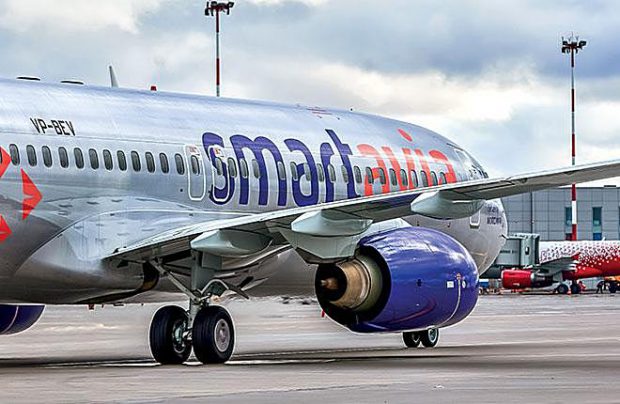 After almost 15 years of exploiting the special characteristics of the Russian north – in its name, its aircraft livery and in its corporate style – Arkhangelsk-based regional airline Nordavia (IATA code: 5N) has taken a significant decisive step towards turning itself into a hi-tech and user-friendly version called Smartavia.

While renewed and re-named airline’s business model will retain that of Nordavia by remaining a “classic legacy airline”, it is focusing on improving its financial performance through better relationships with its customers and higher seat load factors, not higher fares.

Although northern attributes remain popular with many Russian airlines and businesses, in the spring of 2019 one of them, the Arkhangelsk-based regional carrier called Nordavia-Regional Airlines abandoned its name for a completely new image and rebranded itself as Smartavia Airlines. The remodelled airline’s Boeing 737-800, with tail number VP-BEV, and proudly sporting the new livery, made its first flight on April 10.

The 189-seat aircraft is the largest ever used by the airline, which traces its history to February 4, 1930, the day that regular air services were launched between Arkhangelsk and Syktyvkar. Nordavia has held its Air Operator’s Certificate for a 15-year period during which it has had several owners, including Russia’s flag carrier Aeroflot and Nornickel, a Norilsk nickel and palladium mining and smelting giant.

From the spring of 2016 the airline has been controlled and managed by three private investors: Sergey Kuznetsov, who previously worked for Nornickel and the Guta financial group; Evgeny Klyucharev, the head of partner carrier Red Wings Airlines; and Sergey Savostin, who became general director of Nordavia late last autumn. In this triumvirate it is Sergey Kuznetsov who is indisputably the “leader”, the “ideologist” and the “chief strategic partner”, as his partners generously refer to him.

Sergey Savostin, general director and shareholder of Smartavia, started his management career in the 1990s at Vimm-Bill-Dann, then Russia’s largest producer of beverages. Later on he ran a pharmaceuticals company, managed the promotion of hi-fi and high-end commodities, ran several enterprises in the Krasnoyarsk District of Siberia by invitation of the regional administration, and also managed projects for an investment company. “I was quick to adapt to the specifics of different businesses and industries, but everywhere I was I [always] promoted efficient management technologies, implemented profitable and sustainable economic models, managed risks and so on,” Savostin now recalls. Similarly, his mission is to turn the rejuvenated Smartavia into a profitable and efficient business. Sergey Savostin’s career in commercial aviation took off at Red Wings Airlines (IATA code: WZ) as a result of an invitation from Sergey Kuznetsov, who had acquired a share in the airline jointly with his partners in early 2013. At the time, Red Wings was under investigation by Rosaviatsiya, Russia’s aviation authority, following a Tupolev Tu-204 crash at Moscow’s Vnukovo airport in December 2012.

Savostin reveals that his friendship with Kuznetsov had started well before both of them became involved with Red Wings, as they shared aikido sports interests and provided “some support to each other” in several commercial projects, he recalls. With the invitation from Kuznetsov to join Red Wings and even though he lacked experience in aviation, Savostin soon became executive director and a member of the board of directors, overseeing the airline’s economic performance, its finances and audits, as well as being involved in the creation of a new business model for the carrier.

From 817,000 passengers in 2012 (before it was acquired by the current owners) Red Wings tripled its operational results in 2018, serving 2.6 million, an upswing that secured its position among Russia’s top-10 airlines. From its initial concept of operating only Russian-made Tupolev Tu-204 services, the airline has now migrated to an all-Airbus fleet. Encouragingly, 2017 marked the company’s first year in the black since 2013.

Despite the fact that the Red Wings associate is a subsidiary of the state-controlled Ilyushin Finance Co leasing company, Sergey Kuznetsov and his team remain the principal drivers behind the airline’s development. Red Wings and Smartavia, although operating as separate entities, nevertheless continue to pursue synergies whilst sharing the same commercial management. According to Savostin, this alliance helps negotiate discounts and other benefits from fuel and other service providers.

Nevertheless, this current year will require maximum concentration and focus from Smartavia’s management team, Savostin warns. The airline is already building up its resources, including those for human, financial and organisational needs, as it gets ready to take delivery of six additional Boeing narrow-bodies, primarily the B737-800, by mid-summer. These aircraft will provide additional capacities for boosting its scheduled and charter offerings, including Smartavia’s strengthening its presence at St Petersburg and Moscow. It is currently coordinating its route network expansions with the main focus on providing direct services between Russian cities, particularly in the northern region with destinations in the south of the country. As a result of fleet expansion, the airline expects to almost double its traffic levels from last year’s 1.19 million to 2.2 million passengers in 2019.

Besides fleet expansion, its main investment focus for this year is improving the passenger experience whilst implementing new digital technologies. The main objective is to make the airline more customer-friendly, and among other things, the plan includes new passenger service standards, a new fares structure, a native website and a mobile app, enabling communication with passengers via smartphone, for example.

The company’s rebranding activities will continue to stretch throughout the year and are aimed at assisting Smartavia in its ambitious plan to “approach leading positions in the Russian air travel market.” The combined traffic target for Red Wings and Smartavia is five million passengers by the end of this year. What appears to be a somewhat risky element in the airline’s management rhetoric is the persistent allusion to the term ‘market share.’ Russia’s most recent commercial aviation history is abundant with examples of carriers who lost everything in the mad rush for market share. Sergey Savostin, however, believes in Smartavia’s lucky star. “Nordavia is entering a new era of its history,” he insists. “We want to be truly modern, efficient and bright. To achieve this, every employee of the airline, from general manager to flight attendant, must do their best.”

As part of its new business strategy Smartavia does not intend to raise airfares artificially, even for the sake of the project’s financial success. It prefers instead to concentrate on boosting its seat load factor, a measurement that is projected to reach 90 per cent this year. In Nordavia’s entire previous history this key performance indicator never exceeded 80 per cent.

Smartavia currently operates a fleet of 12 Boeing 737s from its base airports at Arkhangelsk, St Petersburg and Moscow to more than 50 destinations in Russia and beyond.