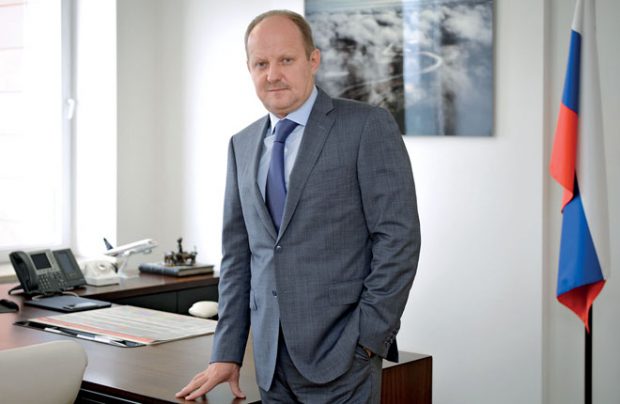 — What is the status of GTLK’s priority program to lease out Russian SSJ100 regional jetliners?

— First of all, I would like to say that in the past two years we have managed to create a leasing market for the SSJ 100. Operators now have a better understanding of the aircraft, its performance characteristics and economic efficiency. Work continues to perfect the aftersales support system. There is already competition between lessors on the SSJ100 market. I have to say, in all modesty, that GTLK contributed heftily to this.

In another development, Gazprombank, our SSJ100 partner, has recently announced the successful completion of the effort to syndicate a loan for GTLK to the tune of 30 billion rubles ($500 million). The money will be spent on financing the program. The syndicate of creditors also includes Russian Regional Development Bank (RRDB), Industrial and Commercial Bank of China (ICBC), and Credit Bank of Moscow as co-organizers, as well as Banca Intesa and Bank of China as participants.

This is a unique case: foreigners are investing in the promotion of a Russian aircraft for the first time ever. Incidentally, at MAKS 2017 we are planning to announce the signing of an agreement for raising the loan ceiling by more than 13 billion rubles. Our investors believe in the project’s great potential.

— You said work is ongoing to improve the SSJ100 aftersales support system. Could you tell us more about this?

— Maintenance is not GTLK’s core business activity, but it is important to us that our aircraft keep flying rather than remaining on the ground for lack of parts. Protracted AOG situations directly affect the paying capacity of our clients and the SSJ 100’s reputation. We work closely with SSJ100 operators, we understand what they need, and this is the reason why we are working to perfect the aftersales support system.

At the Paris Air Show in June this year, our subsidiary GTLK Europe signed a cooperation agreement on SSJ100 aftersales support with OEMServices, whose stockholders include such primary SSJ100 suppliers as Liebherr, Thales, and Zodiac Aerospace. The agreement calls for setting up a parts depot for the European SSJ100 operators. GTLK will finance the creation of the depot, which will then be managed by OEMServices.

Developing the aftersales support system will help us promote the SSJ 100 to foreign markets, which is in itself a very important objective. The aircraft market is extremely competitive at the moment and, to our regret, there are no queues to buy Russian airliners. Not a single major foreign lessor has any Russian aircraft in its portfolio. We hope that the government’s continuing support for the program will be focused on developing the SSJ 100’s export potential.

— The Russian parliament has recently adopted amendments to the federal budget which call for increasing GTLK’s capital by 5.3 billion rubles. How are you planning to spend this money?

— GTLK’s capital will be increased so the company can buy more aircraft for Russian carriers, develop the GA market, evolve air transport services in Russian regions, and facilitate the development of the Russian aircraft industry. Of this sum, we will spend 4.3 billion on 30 helicopters: 25 Mil Mi-8s and five Kazan Helicopter Ansats. Both types are produced by Russian Helicopters.

The remaining billion rubles will be spent on purchasing five L-410 turboprops produced by the Ural Works of Civil Aviation. We will additionally generate over 7 billion rubles from extra-budgetary sources to invest in these two programs.

— Will GTLK be developing its helicopter and L-410 programs along the lines of the SSJ100 program?

— Yes, we will. Both the program to localize L-410 production and the program to lease out helicopters to Russian air ambulance services will incorporate the same mechanism as the SSJ100 leasing program. Government support allows us to organize advance payments for aircraft, after which we involve extra-budgetary sources in further development and financing of such projects. Furthermore, the lease payments received from our clients get re-invested in the programs. For every ruble received from the federal budget, GTLK generates up to three rubles in extra-budgetary investments.

I know that your publication specializes on aviation, but I have to note that the mechanism being employed by GTLK has a multiplier effect on the development of all segments of transport engineering in Russia. What is important is that all these three programs (the SSJ 100, the L-410, and the helicopters) have been cleared to enter the second phase.