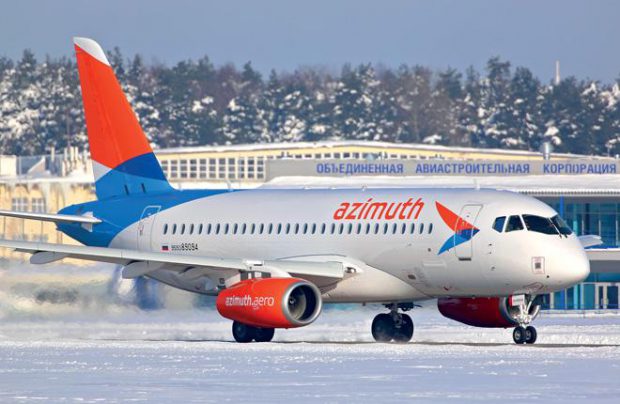 One of the main 2017 commercial events in Russia was the launch of Azimuth Airlines, a private regional carrier (Alexander Mishin / Transport-Photo.com)

Russia’s commercial aviation industry may be celebrating its 95th anniversary with some impressive passenger growth numbers, but it should remain on a flightpath of cautious development, experts warn.

According to the country’s Federal Air Transport Agency (FATA), Russian airlines’ traffic in January 2018 was collectively 13.5% higher than in the same month last year, but this was due mainly to the increased domestic and international competitiveness of the industry in 2017, when Russian airlines carried more than 105 million passengers or almost 19% up on the year before.

Is this double-digit growth sustainable, and what is it that will help the industry stay financially afloat? These are the questions that Vladimir Tasun, president of the Russian Association of Air Transport Operators (abbreviated to AEVT in Russian), and AEVT deputy executive director Boris Shokurov have addressed in an interview with Russian Aviation Insider.

Will similar growth rates continue into 2018? According to Tasun: “Research carried out by AEVT indicates that there is no close interdependence between the performance of Russia’s GDP and the traffic of Russian airlines. Instead, we observe that increasing competition between airlines is a driving factor behind the traffic growth. This is particularly evident in the case of carriers outside Aeroflot Group. In this minor part of the market the competition is quite fierce.”

Airlines have been striving to minimize their costs in order to be able to live with the challenge of competitive low fares, Tasun notes. “Also, while many carriers have adjusted their fleets to the traffic forecasts, others continued to add capacity throughout 2017, especially taking into consideration the re-launched services with Turkey.”

In the expanding market of 2017, some of Russia’s charter airlines enjoyed spectacular year-on-year traffic growth rates of between 50% and 100%. “But I wouldn’t expect them to maintain such growth through to the end of this year,” Tasun believes. “These capacities cannot keep expanding endlessly. I would rather describe last year’s overall situation as the airlines’ response to changing circumstances and market forces.” In general, the airlines’ pricing policies were a consequence of the pressures of sustaining the lowest possible fares, “a scenario which contradicted market expectations while operating in the face of a rising surge of fixed costs such as increased airport fees, fuel costs, etc.”

Will the FIFA 2018 world soccer championship make a big difference to this or impact on the bigger picture during 2018? Shokurov says that, although the world cup will spur demand for air travel in Russia this summer, the overall effect will be relatively modest: “The Russian Transport Ministry does not expect the number of arriving football fans to exceed 4 million.”

He continues: “Without doubt, some of these passengers will be carried by Russian airlines but, to my mind, not the major part. This share is likely to be anywhere between 1 and 1.5 million. Other football fans will instead travel with foreign airlines, or by railway and other ground transportation modes. So as you can see, this contribution to the industry’s operation is important but not major, on a large scale.”

What is the big picture forecast for the rest of 2018? Tasun offers, cautiously: “This year, unless some force majeure occurs, traffic will not go down, that’s for sure. But compared to 2017, growth rates will be more moderate and barely double-digit – perhaps between 5% and 7% – since last year the demand for air travel was virtually completely saturated.”

Shokurov’s outlook is a little more optimistic: “Mr. Tasun tends to be on the more pessimistic forecast side. In my view, the traffic will grow some 8% to 10%. The positive dynamic is expected to stem from the possible re-launch of Egyptian leisure destinations and a continued recovery of other key tourist routes.

“In any case, we think that the industry is not likely to experience the explosive growth it enjoyed last year, because virtually all markets have now been tapped. Besides, data published by the Russian Federal State Statistics Service regarding the dynamics in personal disposable income offers little room for optimism. And if you recall that air fares have, on average, remained roughly level for the last three years, the picture doesn’t look rosy at all.”

Is that view supported by facts? Says Shokurov: “Well, that air fares situation is a generally accepted fact. In the first nine months of 2017 airlines’ revenue per passenger kilometer decreased by 10%. In the fall of that year, the Federal Antimonopoly Service registered an average 10% reduction in air fares. Moreover, on some of the most popular routes air fares were lower than the price of railway tickets. So definitely, the airlines’ fare policies stimulated the demand for air travel.”

According to Tasun, it is clear that this directly affected the industry’s economics: “We have not yet finalized the data on the cumulative financial performance of Russia’s airlines, but we expect that the industry generated anywhere between 3 and 5 billion rubles ($53 million to $88 million) in profits in 2017. This isn’t much more than in 2016, when the cumulative financial result was 2.8 billion rubles of profits.”

It must also be taken into account that the costs of aviation fuel spiked in the second half of 2017, notes Shokurov. “In general, throughout the year, costs spiralled by more than 22% and the peak of this coincided with the fourth quarter of the year, which is traditionally the low season for airlines,” he adds.

So what helped airlines stay in the black? According to Tasun: “First was the introduction of reduced VAT (cut to 10%) for domestic travel. Second was the impact of state subsidies for regional operators. On top of those two factors, to a certain extent, was the effect of the strengthening of the ruble. Clearly, domestic airline services can still generally be seen as commercially unviable – but they are supported because of their social importance.”

A study of the airline industry’s financial performance for the last year illustrates that, in the first nine months, domestic carriers suffered a general loss. “It is only due to their international business that [some] Russian airlines were able to compensate for these losses, taking advantage of increasing numbers of passengers wishing to travel abroad, a trend which doesn’t seem to be cooling off just yet.

“So AEVT salutes the government’s decision to continue supporting regional air services,” Tasun says. “The amounts of these subsidies may not be very large, but these measures are an important contribution, including the prolongation of the 10% VAT regime until the end of 2021.”

If Russia’s airlines have exhausted all available current market opportunities, where should they now look for growth potential? According to Shokurov, it is unwise to dramatize and draw too many conclusions from this perspective: “The Russian economy continues to grow, albeit slowly. According to the statistics service, there are several factors that point to growth, such as the consumer confidence index, for instance.

“Further potential for the development of Russia’s airline industry lies in the expansion of regional route networks instead of focusing on the existing Moscow-centered system. During the last days of the Soviet Union, passenger traffic on domestic routes inside the Russian Republic was 1.5 times greater than it is now.” – Boris Shokurov, AEVT deputy executive director

“In terms of how airlines are going to deal with these conditions, they have balanced their financial standing by more efficient use of capacities. Some experts say that there are too many aircraft being imported to Russia, but we object to this view. Were that the case, the seat load factor wouldn’t have reached 83.2% last year, up 2.1 percentage points on 2016. According to FATA’s preliminary report, in January this indicator stood at 79.3%, up 1.8% on January 2017.

“In our view, further potential for the development of Russia’s airline industry lies in the expansion of regional route networks instead of focusing on the existing Moscow-centered system.

“During the last days of the Soviet Union, passenger traffic on domestic routes inside the Russian republic was 1.5 times greater than it is now. It is comforting to know that there are airlines in Russia which are betting on the positive development of their domestic route networks.”