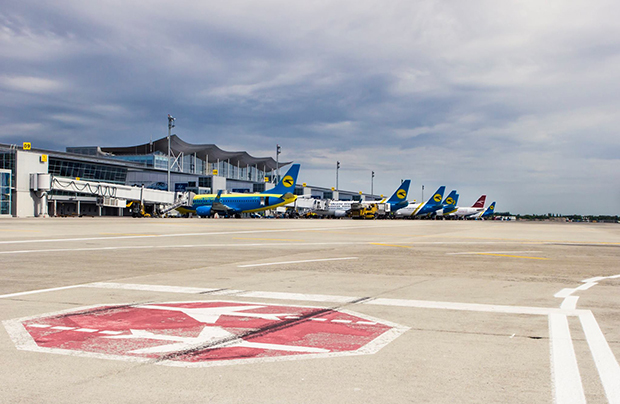 Since 2013, the Ukrainian airports have lost a third of passenger traffic to crisis-related shifts in the air transport market (Boryspil International Airport)

Airline passenger numbers continue to slide across the Ukraine, as ageing regional airports remain in desperate need of modernization and have not recovered from the reverberating effects of global economic crises, market shifts and political difficulties.

The combined number of passengers handled by the nation’s regional airports last year stood at 2.5 million, or 23 per cent of the country’s total passenger traffic. This is the lowest number since 2008 and compares starkly with 2013, when 4.8 million people passed through Ukraine’s regional terminals.

It could be argued that such a significant decline in the number of regional airline passengers is expected in times of crisis. However, in stark contrast, Kyiv’s Boryspil Airport saw passenger numbers peak between 2008 and 2010, allowing the capital city to weather the crisis by commanding higher levels of business activity and purchasing power.

Boryspil’s buoyancy aside, Ukraine’s airports are disappointingly underperforming. Data from the State Aviation Administration of Ukraine shows that commercial flights currently operate out of 20 Ukrainian airports. Two of these, Boryspil and Zhulyany, serve Kyiv. That leaves 18 regional airports, of which only five handle more than 100,000 passengers per year.

The remaining airports are mainly used by business aviation and infrequent charter services, with scheduled flights operating from Ivano-Frankivsk, Kherson, Uzhhorod and now Vinnytsya and Chernivtsi, which reopened for scheduled air traffic earlier this year.

Other positive operational changes in the sector this summer include Ukraine International Airlines (UIA) launching services between Kyiv and Chernivtsi, and from Vinnytsya to Warsaw and Tel Aviv. Rivne Airport started serving commercial passengers again after a long break, with Bravo Airlines operating charter flights to Antalya.

All of these airports have long been used exclusively by bizav operators, but the inclusion of these services do not detract from the two main problems holding back the profitability of Ukraine’s regional airports: outdated infrastructure and market shifts caused by economic crises.

Since 2013, Ukraine’s airports have lost a third of their passenger traffic because of crisis-related shifts in the air transport market. A number of foreign carriers, such as Emirates and Alitalia, have left the country’s scheduled passenger market whilst others, including Flydubai and Austrian Airlines, have cut their frequencies.

At the same time, the cessation of air services between Ukraine and Russia saw some Ukrainian carriers, including UTair Ukraine and Windrose, discontinue scheduled operations or downsize their route networks dramatically. No-frills carrier Wizz Air closed its Kyiv office and moved part of its Ukrainian business to Wizz Air Hungary, its home headquarters.

Amidst these shifts, UIA strengthened its position both in the scheduled and charter market segments. The airline carried 77 per cent of all Ukrainian passenger traffic in 2015 and is currently the largest carrier in Boryspil, where it is based, and Odesa, Kharkiv, Lviv, Ivano-Frankivsk, Vinnytsya, as well as at Dnipro via an arrangement with local carrier Dniproavia.

Only two Ukrainian regional airports have home-base carriers: Dnipro-based Dniproavia and Motor Sich Airlines in Zaporizhzhya. The remainders largely depend on UIA for their operating revenues and a handful of foreign carriers – mostly Turkish – which include Turkish Airlines, Pegasus, and AtlasGlobal.

Not surprisingly, such an unstable business model compromises long-term planning and vital infrastructure development. Apart from Boryspil, only three Ukrainian airports boast modern facilities. As part of the preparations for the UEFA Euro 2012 football finals, new passenger terminals, runways and aprons have been erected at Lviv and Kharkiv, and Zhulyany has received two new passenger terminals and had its single runway reinforced and extended by 150 metres.

Elsewhere, a new passenger terminal is under construction at Odessa, but the completion deadline has been postponed several times and is now set for early 2017. The Zhulyany and Kharkiv terminals were built with private funds and the Odesa project is also a private initiative. The infrastructure of other regional airports mostly dates from the 1970s and 1980s and is substantially outmoded, thereby restricting the aircraft types that can use them.

Earlier this year the Ukrainian government adopted a program to develop the country’s airport network through 2023, in a project which calls for the refurbishment of the existing infrastructure and the introduction of new facilities at 15 regional airports. The government expects to fund the effort to the tune of 8.7bn hryvnyas, or around $335m at current exchange rates, over the next eight years, sourced primarily from the state budget.

The airports modernization project also targets private investors – under private-public partnership contracts – but the question of whether private capital will take an interest in any of the regional airports, given their modest passenger traffic performance and uncertain prospects, is unclear.

At the same time, the probability of sufficient government subsidies being allocated is fairly low, given the current state budget shortages and the IMF-imposed restrictions on budget spending.

As the majority of Ukraine’s regional airports are municipally owned, it would be in the local authorities’ best interests to maintain and develop them but, if no funding comes either from the state, or from local budgets, then regional air services in Ukraine may well become history.