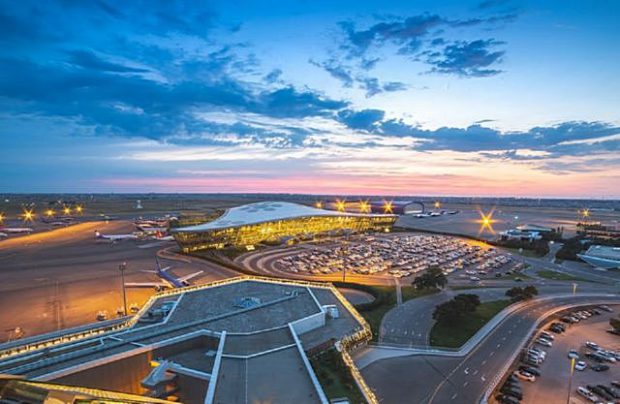 Baku Heydar Aliyev International Airport (IATA: GYD), the main air gateway to Azerbaijan and which is part of state-owned Azerbaijan Airlines (AZAL), is proceeding with its digitalisation efforts as it gears up to handle increasing numbers of transit passengers, Teimur Gasanov, the airport’s director, shared at the Wings of the Future 2019 forum in Moscow last week.

Gasanov expects the airport’s total traffic to reach five million passengers by the end of this year, which would be an 11 per cent improvement on 2018’s operational results. This year, once again, Moscow is on the list of the three most popular destinations from Azerbaijan’s capital. Last year AZAL’s president Jahangir Askerov set a target of seven million passengers by 2020, but it appears unlikely that the airport will boost its traffic next year by 40 per cent compared to 2019.

BETWEEN EUROPE AND ASIA Baku Heydar Aliyev International Airport handled 3.7 million passengers in the first nine months of 2019, up six per cent year-on-year. AZAL and its Buta Airways low-cost subsidiary are the main contributors to the traffic growth (AZAL)

AZAL’s management firmly believes in the concept of turning Baku into an important hub for passengers traveling between Europe and Asia. “We are now at the stage when we are just starting to develop in that direction,” Gasanov notes, adding that the airport is already enjoying “immense support” from base airlines Azerbaijan Airlines and its low fare subsidiary Buta Airways. “Two years ago we had hardly any transit traffic, and this year it’s four per cent [of the entire passenger number]. So I believe that we’ll see the results of our cooperation with AZAL and Buta Airways in this direction in a couple of years. This figure is certain to change radically for the better,” he assures.

The airport’s management is counting on the on-going digitalisation of all of its operational processes to contribute to its expected traffic growth. “This year we have started using Amadeus products to their full extent,” Gasanov reveals, insisting that Baku airport is the first in the world to run cloud technologies – “in all aspects, throughout.”

He admits it is risky to be the pioneer. “But our hopes were high and they have been fulfilled. Automation of many processes helps us speed up handling – for both passengers and aircraft,” he concludes.

On the same subject, AZAL’s president Jahangir Askerov notes: “One of our priorities is to increase the number of incoming passengers, and modern technologies are very useful in this regard. Our partnership with Amadeus will drive up our operational efficiency and, more importantly, improve the passenger experience.”