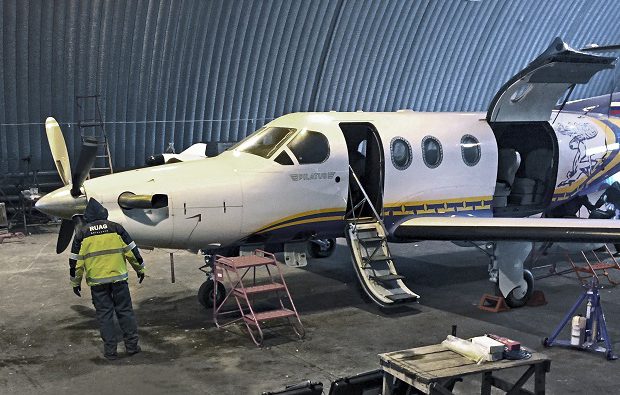 The agreement comes after Switzerland-based RUAG successfully completed three separate and what is described as “highly exacting” aircraft maintenance and repair events on two AeroGeo Pilatus PC-12s and one Cessna aircraft in 2017 in the cold depths of Siberia.

Krasnoyarsk-based AeroGeo, which operates commuter flights in Central Siberia, has added a new PC-12 to its fleet to support its growing operations. This aircraft, as with the operator’s second PC-12, had previously been inactive for an extended period of time before being added to the fleet. Stored in a hangar without parking maintenance or regular maintenance checks, the aircraft was also subjected to sub-zero temperatures.

“We were keen to have these aircraft flying and contributing to our operations as soon as possible,” says AeroGeo CEO Alexander Mamaev. “That is why we contracted RUAG to manage the entire project. They came highly recommended by a colleague, a satisfied RUAG customer, who also operates PC-12s in Russia.

“RUAG provided us with outstanding support and we were very impressed with how they approached each of the projects. They handled every detail with absolute professionalism, beginning with an on-site visit to assess the scope of the work. The RUAG teams then arrived in Siberia with all the necessary tooling and equipment, and worked diligently to provide exact solutions for every task and issue, even in the sub-zero temperatures.”

Ahead of each trip to Siberia, the RUAG teams conferred with the relevant OEMs for aircraft platforms and engines in order to precisely identify the tasks and guidelines necessary for achieving non-technical objections (NTO) for the subsequent ferry flights, for the PC-12s, and for the Caravan’s test flight.

The challenging on-site repair and maintenance events required spare parts and work on the airframes, cables, component mechanisms, and engines. In addition, the Cessna Caravan 208, which had been grounded as the result of a frontal impact, was in need of significant structural repairs, requiring the team to include sheet metal working.

Each of the three Siberian projects was managed by its own RUAG team assigned to stay on site in Siberia until the initial repairs on all three aircraft fulfilled the NTO standards for the subsequent ferry and test flights, as specified by the OEMs.

AeroGeo appreciated this personal approach. “Continuity in personnel ensured we were able to discuss every detail efficiently and knowledgeably. This saved time overall,” Mamaev asserts.

All three projects progressed according to the set timetable, with the second PC-12 achieving NTO status in October. Following the Siberian repair work, AeroGeo then scheduled both Pilatus aircraft for visits to the RUAG MRO facility in Geneva, Switzerland.

Volker Wallrodt, senior vice-president at RUAG’s Business Jets, Dornier 228 & Components, says the teams are dedicated to providing 24/7 support even in remote locations, “and even in challenging -20°C temperatures.”

RUAG Aviation is a partner to the Swiss Armed Forces and other international air forces, and is also the OEM of the Dornier 228, a versatile aircraft used for special missions, passenger and dedicated cargo operations.