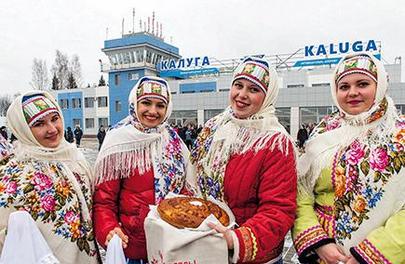 On November 1, Kaluga International Airport served Air Berlin’s first charter flight: the carrier’s Airbus A319 arrived from Braunschweig in the interest of Volkswagen. Charters such as this, which would earlier land at a Moscow airport, now use the recently renovated facility 160 km southwest of the Russian capital. Owned by the regional government, Kaluga has recently been added as a new scheduled destination to the Russo-German agreement regulating bilateral air traffic.

Alexey Laptev, first deputy governor of Kaluga Region, told Russian Aviation Insider about the airport’s importance to the region, and about the regional administration’s plans to return on its investments.

– The program to renovate Kaluga’s airport cost around 4 billion rubles [some $61.7 million at the current exchange rate], of which sum the regional government invested 1.3 billion. The rest came from the federal budget and private investors. Is there a plan for returning on this investment? When, and how, can this be achieved?

– You are correct, the construction program at Kaluga International Airport cost around 4.5 billion rubles. By construction I mean construction, not reconstruction, because the entire airport had to be built virtually from scratch. Take, for example, one of our largest expenses, the construction of the new runway, which was preceded by the demolition of the original one. There might, of course, have been a way to reuse the old runway’s pavement, but economizing on quality and safety is not something we can afford. We received, in total, 913 million rubles from the federal budget; the rest of the sum was in the form of a loan from [state-owned bank] Vnesheconombank. This is why we managed to create this global-level logistics and transportation infrastructure facility in such a short perod of time and without much harm to the region’s economy.

As for returning on our investment, Kaluga airport is certainly meant to be a revenue-generating project, just like any other commercial facility. However, this early on we are not thinking in terms of profit yet. As things stand, it is more important to launch flights to the most popular destinations inside Russia and abroad. That is what we are working on. We started with St. Petersburg and Sochi, we have recently added Mineralnye Vody and Krasnodar, and flights to Voronezh, Saratov, Nizhny Novgorod, and Samara will be added by year-end. We are doing this solely to address the needs of passengers in our region and the neighboring regions, seeing as air fares from Kaluga are sometimes less expensive than railway tickets, which is a factor for many passengers. So yes, the airport’s traffic is growing. If the growth rate stays the same, we will have handled 40,000 people by year-end. For 2016, the plan is 100,000, because we will organize flights to Crimea next year. We hope to reach the break-even point by 2020.

How is your airport influencing the social and economic situation in the region, directly or indirectly

It is too early to draw any results, the [renovated] airport has been in place for less than a year. But we have done some preliminary calculations, comparing ourselves to the airports in Belgorod, Voronezh, and Bryansk regions. We see that on the airport market, it is supply generating demand, not the other way around. As soon as a modern international airport emerges in the region, the structure of passenger traffic changes substantially, because most passengers prefer to fly abroad directly from their regions if they have a chance to. Those who have flown once in their life will always prefer an aircraft to a train. On flights [from Kaluga] to St. Petersburh, the average load factor does not go below 70. Other destinations are also popular, both ways. This facilitates the development of a tourism cluster in the region. We have many unique, scenic natural and architectural sites of interest.

The airport is extremely valuable to the region’s economy as another opportunity for potential investors to visit Kaluga. To many businesspeople, the existence of an international airport in the area is a major factor influencing their decision to visit the region. So, the greater range of international destinations we serve the greater number of new enterprises we may hope to give life to, which will eventually translate to hundreds of new jobs, more families with better income, and multimillion taxes. Even if we had never had an airport before, we would have built one from scratch. It is well worth it.