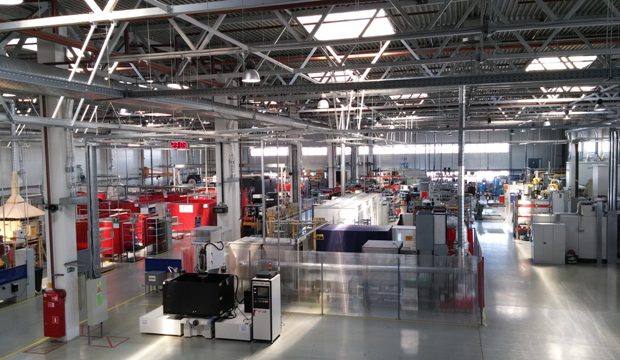 Hamilton Standard-Nauka (HS-Nauka), a joint venture between US supplier UTC Aerospace Systems and Russian company NPO Nauka that produces aircraft heat exchangers for major international airframers, will have expanded its production facility in the town of Kimry, outside of Tver, by October this year. The enterprise will thus complete the second stage of a construction project aimed at doubling the facility’s floor area from the current 5,000 square meters to 10,000.

An HS-Nauka spokesperson told Russian Aviation Insider that the expansion will allow for boosting the Kimry facility’s production capacity from 6,500 articles annually to 7,500, and its labor hours from 300,000 to 450,000. The company plans to purchase additional equipment and exand its product range, including by adding the world’s largest heat exchangers for long-haul passenger and cargo aircraft.

The required investment in the project is estimated at 750 million rubles ($113 million). HS-Nauka plans to raise the funds through a so-called special investment contract (SIC).

“SICs are a new investment attracting instrument in Russia,” the spokesperson explained. “The manufacturer’s own investment is coupled with the input from federal, regional, or municipal authorities.
“We are currently in close cooperation with the aerospace department of the Russian Ministry of Industry and Trade and also with the administration of Tver Region, and we hope that the negotiations will result in our signing the Russian aerospace industry’s first special investment contract.”

The SIC proposal is currently under consideration at the ministry; Tver governor Igor Rudenya has already expressed his support for the idea.

The first stage of the expansion project, which brought the Kimry facility in line with the international LEED energy efficiency standards and lean manufacturing practises, was completed in October 2011. This allowed HS-Nauka to boost its production capacity and expand its product range.

HS-Nauka was founded in 1995. All its production capacities, as well as the design bureau and the technological competence center, were initially concentrated in Moscow. The company soon secured its first orders, and eventually its backlog grew big enough to warrant the construction of a new production facility.

The investment project launched in 2011 began with the construction of the initial production facility in Kimry. The project calls for the major part of the company’s output to be exported. By the end of the second phase of the effort HS-Nauka will have invested over 1 billion rubles into it. The new facility continues to create new jobs, and provides training to its engineers and manufacturing personnel.

HS-Nauka produces heat exchangers, air conditioning systems, and other environmental control equiment for all the major global OEMs, as well as for airlines and MRO providers. The share of Russian companies among its suppliers currently stands at just 10%. The manufacturer’s continuous attempts to bring the figure up have been impeded by several factors. “We have very stringent quality requirements, and our output volumes are not that high,” the spokesperson explained. “So we experience certain difficulties cooperating with suppliers, primarily with regard to semi-fabricated aluminum products. However, we are confident that if Russian companies learned to produce the materials we need, then the domestic aerospace industry would boost its competitiveness and export potential.”

On March 28, the Moscow administration granted HS-Nauka the status as an industrial complex. This means the company is now entitled to land rent benefits and tax rebates. It is also an acknowledgement of the manufacturer’s efforts to develop production and create high-tech jobs in Russia.