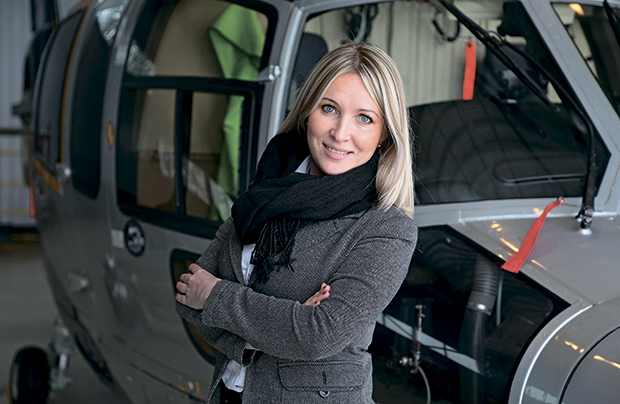 — Apart from our Western partners’ equipment, which we traditionally display here, we have brought three new fully certified in-house developments. A blind-zone video system, designed for Western-built light helicopters, became our first independent project. Video cameras installed on the tail boom and lower fuselage feed video onto a dedicated cockpit monitor, or onto a stock flight display such as the Garmin G500H. The system is certified in Russia and also has EASA and FAA certificates; it is already installed on several helicopters operated in the country.

In a separate project, we have teamed up with Geoscan, Russia’s leading UAS manufacturer and aerial data processing software developer, to develop an aerial photography station for Robinson R44 helicopters.

Finally, this time we will demonstrate a project being implementing jointly with Ramensky Instrument-Making Design Bureau. Codenamed Helicopter Parktronic, the system warns the crew of obstacles on final approach, including low-observable power lines and masts. It informs the pilot about the direction from which the potential threat is coming, and measures the distance to it. A prototype is on show at our exhibition booth.

— These projects appear to indicate a departure from the times when you merely represented Western manufacturers and service providers on the Russian market.

— Our company was established in 2013. Under our initial business model, we would organize local certification and marketing of our Western partners’ equipment, training facilities and servicing centers in return for the exclusive distributor status. We pioneered in many ways: for example, on behalf of our partner DART Aerospace we started to provide supplemental type certification for ancillary equipment. We were first to arrange certification of a foreign helicopter MRO provider, NHV of Belgium, under the recently introduced FAR 285 rules. Our other first was developing fully integrated engineering solutions, having them certified in Russia and abroad, and installing them on our customers’ helicopters. Our other achievements included the successful completion of a complete instrument panel retrofitting project for the the H130 helicopter model. The complexity of this project was unprecedented for us. At the site of our Spanish partner Heliswiss Iberica, we organized restoration of a helicopter almost completely destroyed in an accident. And we were also first to start supplying Russian helicopter manufacturers with medical modules, namely the EMS interior solution supplied by Air Ambulance Technology.

— The staff manning your exhibition booth is wearing Citicopter uniform. What is this project about?

— In April 2017 Heliatica became the managing company for HeliClub, which is located 25 km away from Moscow. We used that facility to establish Citicopter, a certified maintenance center for a number of helicopter models such as the Robinson R44 and R66, the Airbus Helicopters AS350 and EC130, the Bell-407, and the Leonardo AW119/109/139. We are also looking to establish line maintenance outstations for our foreign partners Heliswiss Iberica and NHV on the site. We are currently in negotiations with another two foreign MRO providers. Our goal is to create a maintenance center in Moscow Region that would be popular with Russian customers seeking Western MRO experience. We hope that the combination of services offered by Citicopter and our foreign partners will allow us to offer competitive prices.

— In your opinion, is the Moscow regional market not oversaturated with offers from such majors as Heliports Russia Group and Gorka Center?

— This is true, there are many helicopter maintenance centers and outstations around Moscow. This is exactly why we have chosen to develop this HeliClub-based project. Rather than further developing the flying-club aspect of the enterprise, we want to focus on maintenance services, including heavy checks, i.e. the areas in which Russian companies lack the requisite experience and specialized equipment. We will be able to use the site to install our own equipment and that of our exclusive partners on customers’ helicopters, including HeliSAS autopilots by Genesys Aersosytems, ancillary systems by DART Aersopace, EMS modules by Air Ambulance Technology, and flight data recorders by Gesvol.