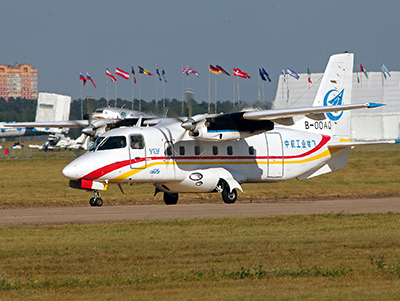 The Russian type certificate for China’s Harbin Y-12E turboprop will be officially awarded at MAKS 2015 on August 27.

Representatives of the Chinese aircraft corporation AVIC will receive type certificate for Harbin Y-12E from Vladimir Bespalov, chairman of the Aviation Registry of the CIS-wide Interstate Aviation Committee.

AVIC is the parent company of the Y-12E manufacturer — Harbin Aircraft Industry Group. The type was certified in China in 2002.

The Y-12E turboprop is powered by a pair of Pratt&Whitney Canada PT6A-135A engines with 750 h/p maximum takeoff power. It seats up to 19 passengers and has a range of 1,310 km. The airplane can be used for passenger and freight transportation, as a trainer, and in other roles.

At least 200 Y-12Es have been assembled in China to date. The Russian exclusive distributor is Fly Avia, which signed a preliminary agreement with Harbin for the delivery of four such aircraft at the Airshow China exhibition in Zhuhai in November 2014.

Harbin’s more powerful modification, the Y-12F, which is currently in certification tests in China, is also expected to be certified in Russia eventually. This version is demonstrated here at MAKS 2015.