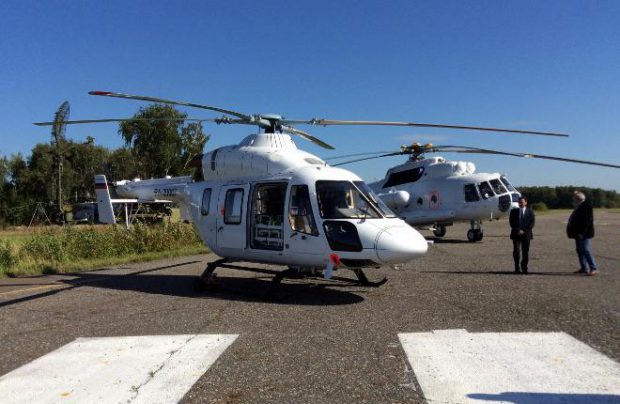 The Ansat and Mi-8MTV-1 will be operated in Russian regions (ATO.ru)

One of these, an Ansat light rotorcraft, is intended for Russian Helicopter Systems (RHS). The second one, a medium-class Mil Mi-8MTV-1, will be operated by Arkhangelsk’s Second United Aviation Squadron.

RHS expects to start using its Ansat for medevac missions in late September. It will fly patients to the Pskov regional clinical hospital from around the region. The operator already has three Ansats, including one in VIP configuration.

RHS received its first of the type in early 2017, and has been operating it in Volgograd Region. According to CEO Alexey Zaitsev, the aircraft has logged more than 200 flight hours, and has recently carried its hundredth patient. The second helicopter arrived in early September, and is currently in service in Kurgan Region.

The new Mi-8MTV-1 will be put into operation in Arkhangelsk Region in late September, the operator’s flight director, Sergey Shamov, told Russian Aviation Insider. It will be used on medevac and passenger transportation missions. According to the Federal Air Transport Agency, the Arkhangelsk squadron already has 11 Mi-8 family rotorcraft, including one Mi-8MTV-1 and nine Mi-8Ts.

The newly delivered aircraft represent a 29-ship batch (10 Mi-8MTV-1s, 13 Mi-8AMTs, an six Ansats) supplied to GTLK under a contract with Russian Helicopters that was signed in November 2016. All the helicopters will be equipped with medevac cabins. They are being leased to Russian operators on preferential terms thanks to government support measures provided to GTLK. Deliveries of the batch are expected to be completed by year-end.

Dmitry Sergeev, advisor to the Russian Helicopters CEO, confirmed to Russian Aviation Insider that the last of the batch is scheduled for delivery in October. He also cited the Health Ministry as estimating short-term demand for medevac helicopters in Russia at around 60 aircraft.

GTLK will receive additional funding for the regional medevac program from the federal budget in 2017. This, and money to be raised from third-party investors, will enable the lessors to acquire 31 more helicopters (19 Mi-8s and 12 Ansats) in 2018.