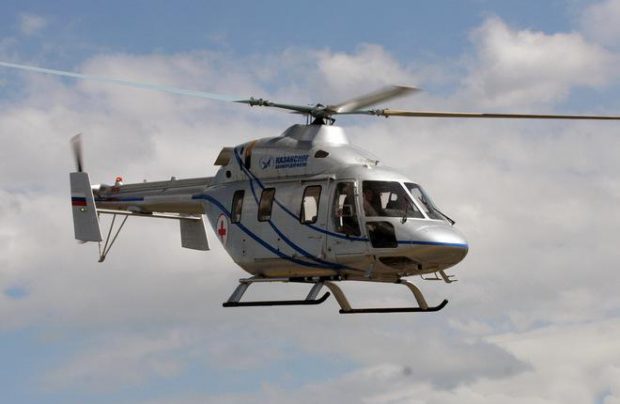 Russia’s GTLK State Transport Leasing Company (has taken delivery of yet another Ansat light utility helicopter in air ambulance configuration. The aircraft is intended for the administration of Kirov region and will be operated by locally-based operator Vyatka-avia, according to the producer of the aircraft, Russian Helicopters.

The aircraft is delivered under the auspices of a state program for development of air ambulance services in the Russian regions. In Kirov region, for example, the Ansat will take patients from remote areas to central hospitals and evacuate casualties from traffic accident and emergency situation sites.

The Kirov-based operator currently uses a Mi-2 helicopter as well as Antonov An-2 and Cessna 182 aircraft for the medevac purposes. Vyatka-Avia and GTLK signed an agreement for lease of Ansat at the Moscow MAKS-2017 air show in July. The aircraft was delivered to GTLK under a contract with Russian Helicopters sealed in November 2016.

According to the agreement the leasing company will get 29 helicopters within 2017 – six Ansats, 13 Mi-8AMT and 10 Mi-8-MTV-1. These rotorcraft will be delivered to their operators before the end of the year. Preferential leasing terms apply for these aircraft, since GTLK is also part of the said state program. All aircraft are delivered under financial leasing terms for the period of ten years.

Vyatka-Avia is not the first beneficiary of the contract for 29 helicopters signed last year. The first aircraft from the batch was delivered in May last year to Russian Helicopter Systems. This Ansat is now operated in Volgograd region. GTLK also took delivery of two Mi-8MTV-1s, intended for Polar Airlines and Novosibirsk-based Yeltsovka company.

GTLK and Russian Helicopters are currently expanding their partnership. At MAKS-2107 the companies signed a contract for further 30 medevac helicopters to be delivered within 2018 – 12 M-8AMTs, six Mi-8MTV-1s and 12 Ansats. An umbrealla agreement covering deliveries between 2018 and 2020, for up to 64 helicopters per year within that period, was signed several months earlier, at HeliRussia 2017 show. The number includes up to 50 Mi-8AMT and Mi-8MTV-1s, up to four Mi-171A2s and up to ten Ansats.