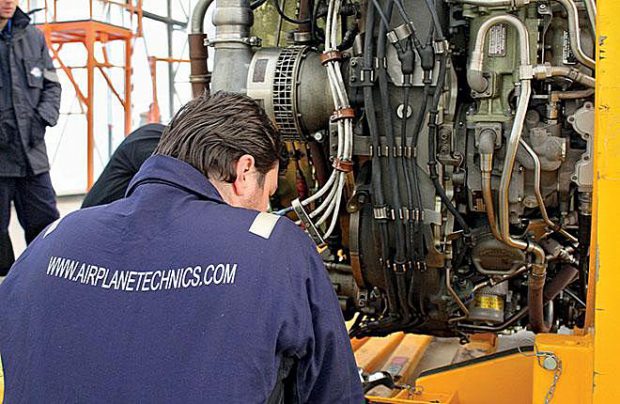 Launched in July 2015, the privately owned Georgian aircraft maintenance and repair specialist Airplane Technics is now ready to climb to new levels. The company has announced plans for the construction of a new maintenance centre at Tbilisi Airport, including a hangar with 13,600 square metres of floor space. The project is scheduled to kick off next spring and to be completed in 2021.

Airplane Technics, with Georgian businessman Tamaz Somkishvili as its main investor, and headed by chief executive Vincenzo Morelli, holds endorsements from Georgia’s Civil Aviation Agency (GCAA) for line and base maintenance of Boeing 737CL/NG and Airbus A320 family airliners, as well as for Cessna 501 Citation business jets. Its latest achievement is GCAA approval for line maintenance of Bell 505 helicopters. On the international side, the company holds EASA Part 145 certification and its equivalent from Kuwait’s authorities.

A spokesman for Airplane Technics has revealed to Russian Aviation Insider that the new facility will be designed to handle Boeing 737/747/777, Airbus A320 Family, Airbus A340 and Embraer Е190 types. The company is investing some US$30 million into the construction project.

The existing 1,764-sq m hangar at Tbilisi Airport became operational in May 2017. Once the larger facility enters service, the original unit will be used for preliminary works or minor checks. Airplane Technics also runs line stations at Georgian airports of Tbilisi, Kutaisi and Batumi. Also, after winning a maintenance contract from Kazakh SCAT Airlines, the provider opened two line stations at Kazakhstan’s Almaty and Chimkent. It is currently negotiating other contracts in the country.

Building its own hangar and launching heavy checks are two key factors that have paved the way for the Georgian company’s business growth. From 3,000 labour hours in 2017 this has risen to 25,000 thus far in 2018. Its next ambition is to win approval for the maintenance of the Airbus A320neo.

Among Airplane Technics’ current customers are Kuwait Airways, Jazeera Airways and Wataniya Airways (all three are Kuwaiti), as well as Air Arabia and flydubai (both from the UAE), Georgian Airways, and SCAT (Kazakhstan) amongst others. The company also admits to being in negotiations with several Russian operators.

Airplane Technics was created with international markets in mind, its representatives reveal, citing the shortage of MRO hangar space in Europe and other neighbouring regions. MRO competition at Tbilisi airport – namely, start-up Myway Technics, the maintenance division of flag carrier Georgian Airways and Lithuanian FL Technic – have their capabilities constrained by a shortage of hangar space to carry out minor checks and line maintenance. At the same time, Airplane Technics claims to offer lower prices than its European rivals.

The company currently employs 11 engineers with B1/B2 endorsements and expects to raise that number to 40 before year 2020. Overall, a shortage of competent technicians is plaguing the industry, the company says, a problem it solves by attracting personnel from other countries and also by training its own staff at the college it launched with its own funds. There are currently 50 technicians who have been hired by Airplane Technics, 20 of whom are undergoing on-the-job training at the locations of Tbilisi, Almaty, Chimkent and Frankfurt.