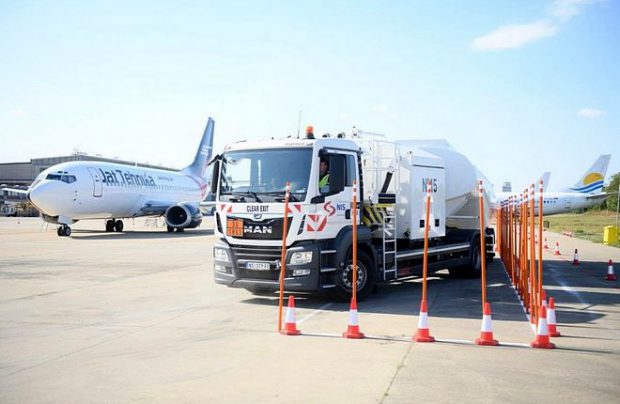 Gazpromneft-Aero has held the second international Aviation Fuel Challenge, in collaboration with IFQP and JIG, in Belgrade (Serbia) in October (GPNA)

Gazpromneft-Aero reached a significant milestone in November 2019: for the first time in its history, the company sold more than two million tonnes of aviation kerosene to international clients, in a market of which it is aiming to become one of the leaders.

The business of engaging in friendly international competitions as platforms for identifying new solutions in jet re-fuelling procedures, is helping to ensure improvements in the overall safety of the process as well as encouraging greater standardisation through the exchange of experiences, have indeed reached a new level this year. The Russian company Gazpromneft-Aero, the initiator of such competitions called the Aviation Fuelling Challenge (AFC) and, together with IATA’s Fuel Quality Pool (IFQP) and the Joint Inspection Group (JIG), an international organization for the development of aviation fuel supply standards, is placing the business of jet re-fuelling in the spotlight, in a business which crucially accounts for around 30 per cent of an airline’s total operating costs.

Refuelling is a particularly important part of the aviation process where even the smallest discrepancies can lead to potential disruption or financial and reputational damage for both fuel operators and airlines alike. The subject becomes even more important if we look at the global growth of passenger traffic, a factor which is also increasing the density of flight schedules so that the price of a re-fuelling error becomes inappropriately expensive not only from the safety point of view, but also from the standpoint of losses incurred by the operator and the airline.

Gazpromneft-Aero is one of the global echelons of jet fuel operators that is actively introducing new technological solutions to power its operations worldwide. For example, Russia’s leader in the retail sale of jet fuel is deploying an automated documentation system that provides real-time control over every stage in the re-fuelling process from the initial reception of aviation kerosene at the station to the actual aircraft refuelling on the airport tarmac. All data is collected and duly processed to guarantee continuous improvements in the operational process. It is also important to recognise that the processes focused on and discussed within the competitions do not remain exclusively inside the Aviation Fuelling Challenge. They must also be brought to life. Typically, within the framework of these competitions, the company is currently preparing a cooperation platform for the subsequent industrial introduction of new technology for automated aircraft refuelling. The exact details of the certification and implementation of this new technology have not yet been disclosed but, according to Dmitry Korpachev, head of international sales directive of CJSC Gazpromneft-Aero, such digitalisation is one of the priority development areas for the company.

It is worth mentioning that, whilst highly volatile, the Russian air transport industry is nevertheless growing twice as fast as the global market. In this background, every fourth aircraft in Russia is re-fuelled by Gazpromneft-Aero. Last year, about 9.1 million tonnes of kerosene was re-fuelled in Russia, and Gazproneft-Aero accounted for 26 per cent of that number. At the same time, 197,300 tonnes accounted for the refuelling of foreign airlines operating in Russia; as a result, the volumes of international cooperation in the territory of the Russian Federation grew by 18 per cent in a single year.

In Russia, the growth of aviation fuel sales is disproportionate to the growth in passenger traffic. While the number of passengers transported in the first six months of this year increased by 12 per cent, the total volume of kerosene consumption increased by only three per cent, a reflection of the fact that there are more fuel-efficient new-generation aircraft in operation in Russia. As well as the growth of passenger traffic in the country, this year also saw an increase in seat load factors, a trend which does not directly affect the business of the fuel operators. In turn, Gazpromneft-Aero grew faster than the market, with the company increasing the volume of ‘into-wing’ re-fuelling by 3.5 per cent.

At the end of September, Gazpromneft-Aero celebrated the 10th anniversary of its international re-fuelling business. At the moment the company is essentially the only Russian player in the international aircraft fuel market and, thanks to its global network, it is now represented at 279 airports (including Russian) in 67 countries. In the first six months of 2019, the network increased by 13 airports. At the same time 31 of these 279 airports are located in China, making it the largest part of Gazpromneft-Aero’s re-selling network. In 2018 the international volume of aircraft re-fuelling exceeded 246,500 tonnes of jet fuel (up 15 per cent year-on-year).

As a part of its 2030 strategy Gazpromneft-Aero is aiming to enter the world’s top-10 aviation fuelling companies, with an increase in its domestic market share to 34 per cent and a five-fold increase in its international market sales. The company also has plans to be more active in the CIS, as well as in Europe and Asia, with the Pacific region the primary focal point of the company’s growth ambitions. Gazpromneft-Aero has already signed a range of strategic partnerships in the Asia Pacific region with national fuelling companies such as CNAF in China. In view of the projected attractive growth rates of passenger traffic in the Asian market, particularly those from China to Russia, players will have the opportunity to significantly increase their aviation fuel sales. Gazpromneft-Aero’s interest in the Chinese market is undeniably based on the potential of the growth of passenger transportation volumes. Typically, in 2018, Russia was visited by 2.5 million Chinese tourists and, with the further development of infrastructure, it is also possible to expect an increase in the growth of transit and direct tourist passenger traffic against the background of politically favourable co-operative situations.

It is also important to consider that some of the most optimal air routes from far eastern Asia to Europe and beyond are across the territory of Russia. With many airlines operating mid-haul aircraft, it is impossible for them to avoid re-fuelling stops in Russia. So, an Aviation Fuelling Challenge that is being held for the second time by JIG and IFQP together with Gazpromneft-Aero, serves as an efficient platform to create new partnerships for re-fuelling and bring international re-fuelling standards to a new level.

“We see our pro-active role. We are keen to raise awareness and ignite vivid interest for the dynamic development of suppliers, and we want to be one of the links in this democratic process,” says Gazpromneft-Aero’s Dmitry Korpachev.

According to a representative of NIS JSC, the national Serbian jet fuel operator and the host of the this year’s Aviation Fuelling Challenge, these international competitions have become more practice-oriented, which allows not only for the exchange of experience within the panel sessions, but also provides opportunities for participants to interact within the workshop that positively affects the real life development and practical application of unified industry standards.

The involvement of airline representatives in these competitions is also essential, notes a representative from France because, in the end, it is the levels of quality provided by fuel operators that affect the airlines directly. It is also worth noting that this industry hides in the shadows and its challenges therefore remain behind the scenes both for airlines and for their passengers, even though, in reality, it is a very strongly regulated business with demanding strict safety rules.

Airline industry body the International Air Transport Association (IATA) regularly holds seminars dedicated to fostering the improvement of the quality of service and preparation level of market players at several certified venues all over the world. The refuelling centre at Novosibirsk’s Tolmachevo airport is currently the only IATA-certified training centre in Russia and the CIS, and is also used to host such global workshops. However, the industry still needs to be brought out of the shadows, as fuel is an essential component of operating expenses for carriers and directly affects the final prices of air tickets, an issue of which all passengers are always sensitive.

It is also essential to pay attention to the fact that in the first half of 2019, the growth of passenger traffic exceeded 18 per cent, while the growth of sales volumes of Gazpromneft-Aero’s international business reached 32 per cent with 158,000 tonnes of kerosene sold.