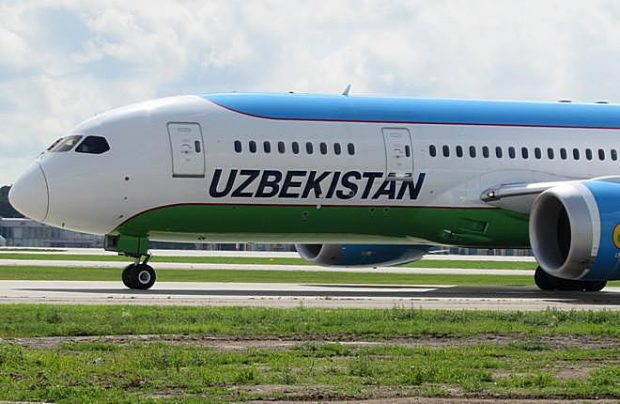 The distance between Moscow and Tashkent is about 2,800 km – and that is one of the routes operated by Uzbekistan Airways’ Boeing 787 Dreamliners (Artyom Korenyako / ATO.ru)

Uzbekistan Airways, the central Asian country’s sole airline, achieved improved operational results in 2019 when the state-owned carrier expanded and modernised its fleet, enlarged its route map, and enjoyed double-digit traffic growth. Nevertheless, the president of Uzbekistan remains discontented with the pace of development of the country’s commercial aviation industry.

Uzbekistan Airways carried 3.802 million passengers on its 26,465 flights last year, resulting in an almost 19 per cent improvement of operational performance compared to 2018, the airline reports.

According to Russian Aviation Insider’s calculations, the average number of passengers carried on each of Uzbekistan Airways’ flights was 144 – a relatively modest result considering the scaling up the airline’s fleet, which now includes high-capacity Boeing 757-200, B767-300ER and B787-8 aircraft. The Uzbek airline has been striving to strengthen its positions in the strategically important air travel market between Russia and Uzbekistan. An example of this effort is its 2019 traffic through St Petersburg’s Pulkovo airport, which increased by 20.1 per cent (to 288,700 passengers), whilst the number of passengers on the route to and from Yemelyanovo in Krasnoyarsk climbed by six per cent to 15,300.

The rise in passenger demand was supported by fleet expansion and renewal projects last year in which Uzbekistan Airways took delivery of two Airbus A320neos and two Boeing 787-8s. The arrival of its sixth Dreamliner is scheduled for the first quarter of this year.

With that in mind, it is virtually impossible to accurately assess Uzbekistan Airways’ financial status. According to some observers, it appears that the airline’s fleet management is far from optimal, and the company may have accumulated historical debts through obscure leasing schemes. There are no ways to officially confirm this information, as Uzbekistan Airways remains tight-lipped even though it changed its status from a state-run unitary enterprise to a joint-stock company late last year.

Uzbekistan Airways changed its ownership structure in the course of major reforms launched by Uzbekistan’s president Shavkat Mirziyoyev in 2018. Even so, the head of state remains discontented with the current state of affairs in the country’s civil aviation industry. The reforms stalled when the newly liberated Uzbekistan Airways and Uzbekistan Airports, which emerged from the state-owned national structure called National Aviation Complex Uzbekiston Havo Yullary, failed to operate efficiently as separate entities, according to the records of the recent government meeting headed by president Mirziyoyev. The summit was dedicated to the priority tasks of improving the efficiency of the country’s transport infrastructure and representatives from both Uzbekistan Airways and Uzbekistan Airports insisted that the reforms will pick-up at a faster pace. “We hope that, as a result of intensified reform activities, 2020 will be a break-through year for [our] aviation industry. It is well known that, for the last three decades, reforms were non-existent in the industry, which resulted in the accumulation of serious problems and discrepancies. Not enough attention was given to the industry, as it developed as an absolute monopoly with no competition at all. This affected the fares and the levels of service,” both organisations agreed in a statement.

In the mean time, Uzbekistan Airways’ press department has revealed the airline’s primary objectives for this year, which include the further expansion of its flight geography, continued fleet modernisation, attracting new investment, the introduction of modern technologies and improving the passenger experience. Although it’s hard to see the concrete measures that will support these general statements, it can be said with confidence that the substantial changes in Uzbekistan’s civil aviation sector will continue. With good luck and fair winds, president Mirziyoyev’s efforts will help the aviation industry to transform and rejuvenate the country’s travel and transfer potential.