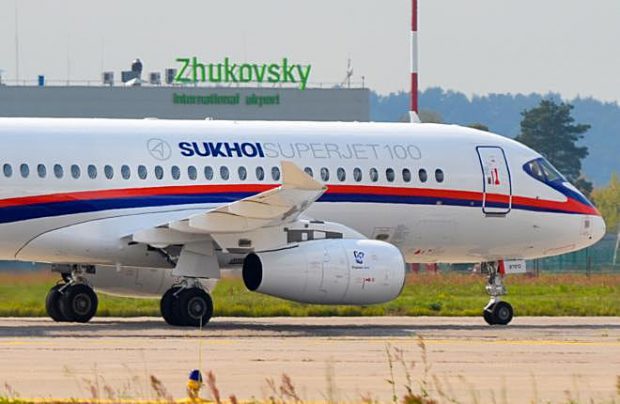 SCAC is now waiting for Russian state aviation authority Rosaviatsiya to complete the certification procedures for this option before the first saberlet-equipped aircraft is delivered to its customer. According to Russian Aviation Insider’s own sources, the Cherepovets-based Severstal Airlines will become the first commercial operator of such a modified unit, with aircraft registration number RA-89135.

Sukhoi Civil has not disclosed either its backlog for the saberlet additions, the cost of one set, or its first customer. “The first winglet-equipped aircraft will be delivered to the customer before the end of this year. We are now in the middle of presentations and exchange of business communication. Until we reach firm agreements, we will not disclose our potential customers,” Dmitry Kalenichenko, SCAC’s PR director admitted to Russian Aviation Insider. “The horizontal wingtip devices will be offered to airlines as an option. The price depends on many factors and is subject to negotiations,” he concluded.

The saberlet-fitted SSJ100 made its first test flight on December 21, 2017 at the company’s Zhukovsky airfield site, near Moscow. Its certification has been postponed several times – first until late 2018, then to the second quarter of 2019. SCAC’s representatives explained to Russian Aviation Insider that the delays were caused by test flights which took longer than expected and because the project was succeeded by higher priority tasks. The flight test programme involved more than 140 flights.

For the last stage of the flight testing programme, the SSJ100’s wing and winglets were covered with an icing simulation device (SCAC)

According to Kalenichenko, Rosaviatsiya is expected to release the approval for the saberlets “shortly.” There are “currently no plans” for obtaining approval for the option outside Russia, although earlier announcements suggested otherwise.

WHO CAN DO THE INSTALLATION?

Sukhoi Civil also remains tight-lipped regarding the time and workforce required to install one set of saberlets as a retrofit option. “The installation may be performed during the next maintenance shop visit. At the moment SCAC is the only organisation that is approved to provide this modification,” Kalenichenko explained. A source at one of Russia’s SSJ100 maintenance service providers told Russian Aviation Insider that he hasn’t seen either the saberlets themselves or the documentations for their installation. “If operators show demand for saberlet retrofits, and if SCAC can provide a technological solution, then we will consider adding the service to our capability list,” he said.

The wingtips for the SSJ100 are produced by the Voronezh Aviation Production Complex (VASO), from Russian-made composite materials certified both in Russia and abroad, SCAC claims. It offers the winglets as an option both for new aircraft and as a retrofit.

Another maintenance provider expressed confidence that operators will show interest for saberlets as a measure to reduce their fuel expenses.

Press contacts at the Russian Ministry for Industry and Trade and SCAC cite minister Denis Manturov and SCAC’s general director Ravil Khakimov for an assessment of the economic effects of the winglets. According to Manturov, SSJ100 operators will benefit from “at least four per cent fuel savings.” Khakimov in turn assesses the economic effect may amount to 10 million roubles per-year-per-aircraft, which roughly equals one month’s lease payment for the SSJ100.

The initial savings forecast is based on calculations of the aerodynamic profile performed by Russia’s Central Aerohydrodynamic Institute (TsAGI) prior to designing the wing geometry. The institute then conducted wind tunnel tests, which confirmed the target improvement of aerodynamic performance. The same result was finally achieved by the actual aircraft performance during the test flights.

“SCAC is working on an array of primary and secondary modifications aimed at improving the consumer qualities of our product,” Kalenichenko continues. These include wider tailwind limitations on take-off and landing, expanded PNB capabilities, the certification of electronic flight documentation and developing software for EFB. The manufacturer has also been undertaking an effort towards reducing the cost of both the aircraft and its maintenance.