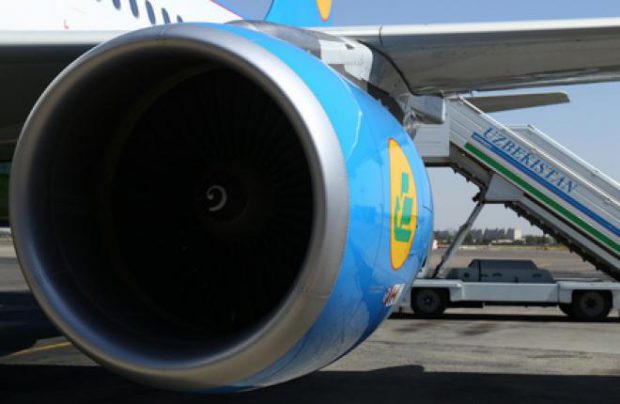 A wide-body Boeing 787-8 spotted painted into Uzbekistan Airways livery at Paine Field, in the US state of Washington, not far from Boeing’s manufacturing plant at Everett.

It is one of the two 787s ordered by Uzbekistan’s national carrier, part of state owned Uzbekistan Airways holing. Both aircraft are slated to enter service in Q3 of this year as part of a program to update and unify the carrier’s fleet.

The airline expects the first aircraft to arrive in Uzbekistan at the end of August for the celebration of the 25th anniversary of the country’s independence. It will begin serving commercial flights in September.

The new aircraft cost a total of $246.4 million. A loan for $223.2 million dollars was furnished to the airline by the Fund for the Reconstruction and Development for the Republic of Uzbekistan.

According to local news source UzDaily, the aircraft are intended for use on long- and extra-long-haul routes to international destinations, including for non-stop flights between Tashkent and New York.

The holding’s MRO division, the Uzbekistan Airways Technics has already opened a repair and maintenance center capable of servicing Boeing 787s. Boeing has invested about $500,000 in the new site. Flight crews have also been trained for work aboard the Boeing 787s. In April of this year, 18 crew members were selected to receive type rating at Gatwick airport, in the United Kingdom.

In the first half of 2016, the Uzbek national carrier handled 1.177 million passengers, against the 1.235 million a year earlier, a decrease of 4.7%. However, there was a marked increase in the number of passengers and flights to destinations located outside the CIS. The load factor increased compared to the same period of 2015.

In addition, the cargo traffic increased 7.5%. From January through June, the company transported 19.7 thousand tonnes of cargo based on excess baggage and mail, against the 18.3 thousand tonnes carried in the first half of 2015.