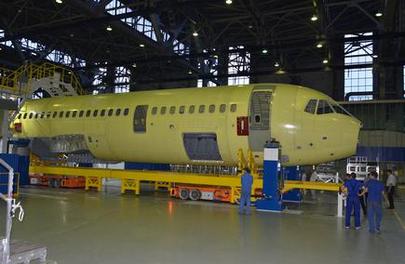 Irkut Corporation has completed assembly of all the fuselage sections of the first MC-21-300 prototype at one of its facilities.

The next stage, which is to include the mating of the fuselage to the composite wing produced by the Ukyanovsk-based Aerocomposit facility, is expected to follow shortly.

Earlier, Irkut announced it was planning to roll out the MC-21 prototype in 2015, to be followed by the maiden flight in the second quarter of 2016. Russian certification of this new narrowbody passenger airliner is slated for 2017, with European certification to follow in 2018, the year the aircraft is to enter commercial operations.

Aircraft of the first series will be powered by Pratt & Whitney PW1400G-JM turbofan engines. Later on, operators will be able to choose Russian-built PD-14 powerplants; prototypes of this design began flight testing on October 24.

Russian airline Red Wings expects to become the launch customer for the new aircraft type. Irkut has accumulated a total of 300 orders for the MC-21, including letters of intent.