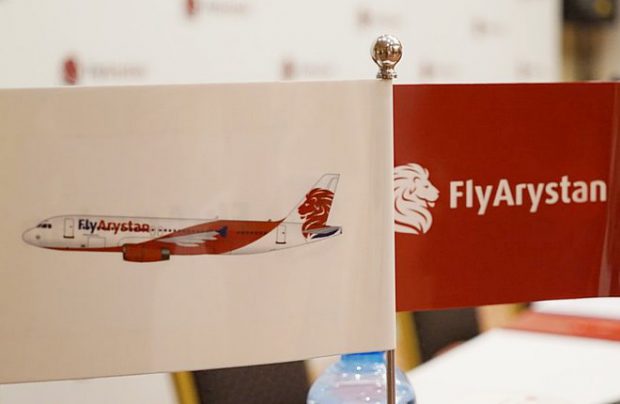 FlyArystan LCC will operate Airbus A320s, which will initially be transferred from the fleet of parent company Air Astana (Air Astana)

In a sign of the emerging popularity of the low-cost carrier concept and the stimulation of increasing population mobility within and across the Central Asia region, Kazakhstan’s national carrier Air Astana has announced plans to launch the country’s first low-cost carrier (LCC) subsidiary before summer 2019.

Central Asia’s first LCC was Azerbaijan’s Buta Airways, which started operations last year, and this was followed by Uzbekistan signalling its intention to create its own discount airline.

The fleet of the new Kazakh budget airline, which will operate under the brand name FlyArystan (Arystan means Lion in Kazakh), will consist of Airbus A320 aircraft, each configured to an all-economy class cabin of 180 seats, Peter Foster, Air Astana’s president and chief executive has revealed.

Created by the desire of Kazakhstan’s president Nursultan Nazarbayev to make air travel more affordable for the country’s population, the operator will “strictly follow the examples of highly successful airlines such as easyJet, Indigo, Cebu Pacific, and Air Asia,” Foster said. In 2019 the airline will operate four aircraft transferred from the fleet of parent Air Astana, with a targeted expansion to at least 15 aircraft by 2022.

The carrier’s route network details are to be revealed in due course, but FlyArystan plans to start by operating from multiple aircraft bases in Kazakhstan, primarily on domestic routes, before gradually expanding its geography to neighbouring countries.

The FlyArystan project is being financed entirely by Air Astana. “ It will require no capital from shareholders, no state subsidies or external financial support of any kind,” its parent company insists.

FlyArystan’s management team has already been appointed and has been drawn from Air Astana’s senior local managers, whom the airline have been developing over the last 16 years. The team will be led by Tim Jordan, a British-Australian national with more than 15 years’ senior LCC management experience at Cebu Pacific and Virgin Blue.

“FlyArystan is the result of much serious thought and internal business planning, and comes as a result of a rapidly changing local and regional airline business environment,” Peter Foster stresses. “It will be good for the mid- to long-term prospects of Air Astana, and we hope will be very welcome to the Kazakhstan travelling public, who will be able to benefit from significantly cheaper airfares on domestic and regional routes.”

Air Astana’s domestic traffic declined by 0.6 per cent in the first half of 2018, according to Russian Aviation Insider’s estimates. Foster attributes this decline to fierce competition and increasing overhead costs. Qazaq Air, one of airline’s competitors, has been the country’s fastest growing airline business, operating three Bombardier Q400 next-gen regional jets. In the first half of the year the airline carried 155,000 passengers, demonstrating an impressive 55 per cent growth. Qazaq Air operates 10 domestic routes and enjoys an 80 per cent seat load factor. Two other – even bigger domestic competitotors are SCAT and BekAir. From outside the start-up is challenged by international low-cost airlines Wizz Air, flydubai and Air Arabia — that serve country’s two key cities – Almaty and Astana.

The Kazakh word Arystan translates in English as Lion (FlyArystan)