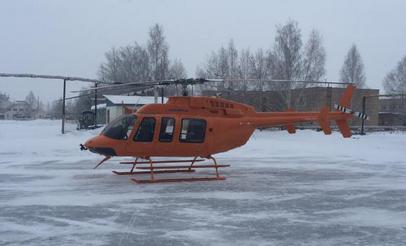 The Omsk-based aeronautical technical college (a branch of the Ulyanovsk Higher Civil Aviation School) has taken delivery of the first Russian-assembled Bell 407GXP light single-engine helicopter. The aircraft was assembled at Ural Works of Civil Aviation (UWCA, part of Russia’s defense corporation Oboronprom) under a license agreement between UWCA and Bell Helicopter signed at the HeliRussia exhibition in Moscow in May 2015.

“It took UWCA specialists five days to assemble and test the Bell 407GXP,” says Bell Helicopter Regional Director for Russia/CIS Sergey Filatov. “On December 30, 2015, UWCA pilots successfully ferried the helicopter from Uktus airport in Sverdlovsk Region to Kalachinsk airfield (83 km away from Omsk Central Airport), where the Omsk college is based.”

The helicopter was delivered under a contract for two such aircraft, which was signed in the fall of 2015. In 2015, Bell 407GXP production at UWCA was approved by the CIS-wide Interstate Aviation Committee.

Under the current contract, the second Bell 407GXP is to be delivered to Kalachinsk by May 1, 2016 at the latest. Filatov says Bell will deliver the second assembly kit in the first quarter of 2016.

The Bell 407GXP was certified in Russia in March 2015. UWCA’s two helicopters are intended for ab-initio pilot training at the Omsk college.