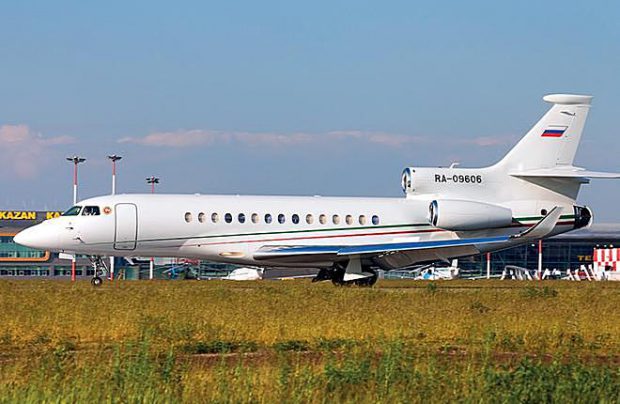 Tatarstan-based airline UVT-Aero has had its maintenance engineers attend special training courses in France to provide services for the Dassault Falcon 8X, a popular model of the business jet in Russia. The company is already performing maintenance work on this type, supporting the aircraft operated by Aeroservice since May. ”We provide technical support for this aircraft under the contract terms,” said UVT-Aero’s chief executive Petr Trubaev at the regional business aviation forum in Kazan. The continuous airworthiness division of UVT-Aero has been offering MRO services for the new aircraft type since May of this year.

The carrier’s technical division is also approved to provide maintenance on the Falcon 7X, smaller sibling of the 8X.

Apart from Dassault bizjets, the company is also certified to work with other aircraft types, including helicopters. Additionally, UVT-Aero sees potential in providing MRO services for Ansat light helicopters.

As of today, it has signed maintenance contracts involving four rotorcraft of the type (two of the helicopters are based in Kirovsk and perform medevac flights, the others are home-ported in Kostroma and Kazan). The company is able to provide maintenance services at its site – and can also delegate engineers to the customer’s premises. Another contract for 10 more aircraft is currently under consideration.

When commenting on the overall current situation regarding the business jet MRO market, a source of the Show Observer insisted that, ‘psychological reasons’ has in the past led aircraft owners to prefer foreign MRO providers. But UVT-Aero is striving to dismantle this stereotypical thinking by proving that the quality of MRO services in Russia is by no means worse – and is available at more affordable prices. In general, the carrier sees that the business aviation sector in Russia is reviving and will continue to grow.

UVT-Aero’s MRO division is EASA Part 145, FAP-285, OTAR Part 145, OTAR-39 certified and is approved to provide both scheduled and AOG maintenance, as well as supply spare parts for foreign- and Russian-built aircraft.