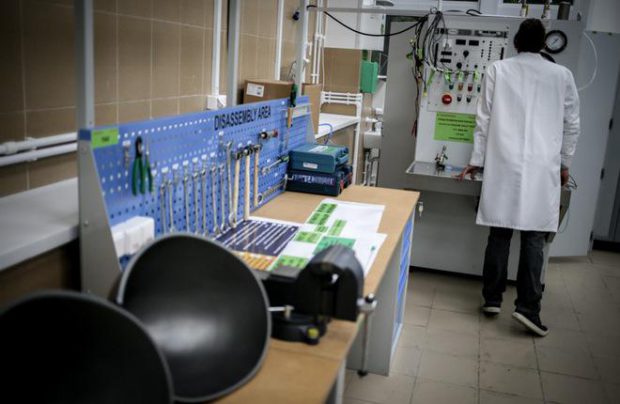 S7 Engineering (part of the Engineering Holding) will open an aircraft lavatory repair station, the first one of its kind in the CIS, at its premises at Domodedovo airport in Moscow. The project is backed by Zodiac Aerospace Services, an American company, which specializes in after-sale support of Zodiac Aerospace products. S7 Engineering will repair lavatory equipment for Airbus A319/320/321, Boeing 737CL/NG, Boeing 767, Boeing 777, Boeing 747-400 under its own EASA Part 145 certificate.

Until now repairs of Western-built aircraft toilets were not available in Russia, so local operators had to resort to the services of foreign MRO providers. The new facility in Russia plans to start by repairing about a hundred toilets per year, but the total capacity allows for repair of 150 to 170 units annually.

There are currently two technicians working at the facility, which consists of two dedicated spaces for cleaning and calibration with a vacuum test stand. Engineering Holding may increase the number of staff, the company’s spokesperson commented. Zodiac Aerospace Services will be in charge of the quality control and will conduct periodic audits and inspections of the facility, as well as S7 Enineering’s entire structure to insure it’s in line with the industry and financial standards.

Engineering Holding’s business development director Alexander Filippov  told Russian Aviation Insider that the new facility will practice repairs on those aircraft which are currently placed with the S7 for checks and maintenance. “We’ll build our competence from there, without affecting the aircraft grounding time. But we intend to offer repairs of toilets on flying aircraft later on. We’ll have to remove them, of course, which requires having a stock of spare units in place. For that, we’ll have to settle customs clearance procedures for the parts and components.”

Prior to launching the project in early 2016 Engineering held a round of consultations with potential customers. The preliminary results of this market research convinced the company that there is sufficient demand for this type of services in Russia and the CIS.

Filippov also stressed that Engineering’s partnership with Zodiac will not be limited to lavatory repairs. “We are aiming at long-term cooperation, and we’ll start negotiating further evelopment perspectives in October,” he said.

The current contract is in line with the Engineering’s strategy to offer services unique for the Russian market. Earlier this year Russia’s largest independent MRO provider launched CFM56 engine repair facility at Domodedovo.