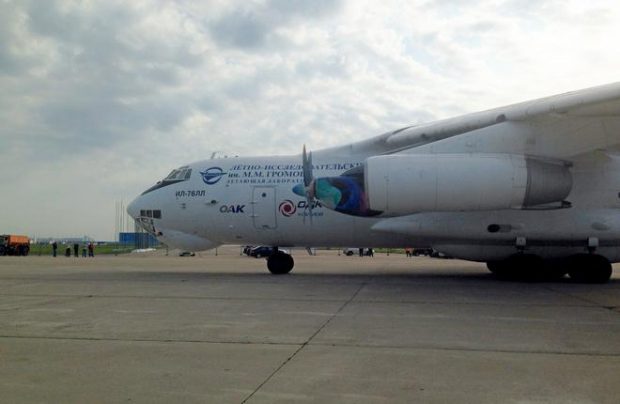 Flight testing of Russia’s new Klimov TV7-117ST turboprop engine commenced at the Gromov Flight Research Institute on September 12. The powerplant is intended for the modernized version of the Ilyushin Il-114-300 regional turboprop and for the Ilyushin Il-112V military transport aircraft. The prototype is being flight-tested on an Il-76LL flying testbed.

“The first stage of the flight testing program will comprise 20 flights,” Yury Shmotin, chief designer at United Engine Corporation (UEC), told media. “Tests will be conducted across the entire range of the Il-112V’s operating speeds and altitudes. The engine is also the standard option for the Il-114 civilian aircraft, so it will be tested within that type’s envelope as well.”

Since the Il-76’s performance significantly exceeds that of the two turboprop types, the prototype engine will be additionally tested outside the Il-112V and Il-114-300 envelopes.

The initial 20 flights are to be completed within two months. UEC does not specify when the engine might be installed on the Il-112V an Il-114-300 for testing purposes. Certification of the powerplant is slated for 2020. The corporation says its performance is designed to “exceed that of equivalent engines by 15%.”

The TV-117ST was initially designed for the Il-112V. TASS newswire reports that the aircraft’s maiden flight has been postponed from 2017 to 2018.

The decision to install the powerplant on the Il-114-300 was made later in the program. UEC says the civilian modification, known as the TV7-117ST-01, will be the main engine option for the regional passenger airliner, whose series production is to be relaunched in Russia. The powerplant version will be certified under commercial aviation standards. The TV7-117ST will be tested in a broad range of airspeeds and altitudes (ATO.ru)

Deliveries of TV7-117ST-01-powered passenger turboprops are scheduled to begin in 2023. Prior to that, between 2021 and 2023, these airliners will be delivered with the less powerful TV7-117SM engines, an upgraded version of the TV7-117S baseline. UAC says the new engine will offer greater payload capacity and better runway performance than the TV7-117SM. The fact that the same powerplant will be used on two different aircraft types will “help bring production costs down, and will become an example of military technology transfer to the civiliansector,” the corporation stresses.

Pre-production preparations on the Il-114-30 are already underway in Russia. Up to 100 examples could be assembled by 2030, including in commercial and special-mission roles. A number of government-funded programs will support the airplane’s entry into service, including with the help of state-run lessor State Transport Leasing Corporation (GTLK).

Ground tests on the TV-117ST began in September 2016. Flight testing is expected to be completed in 2019. The TV-117ST will differ from the competition in that its FADEC system will manage both the engine and the Aerosila AV112 propeller. The powerplant will have 3,000 hp takeoff thrust and 3,600 hp emergency thrust.