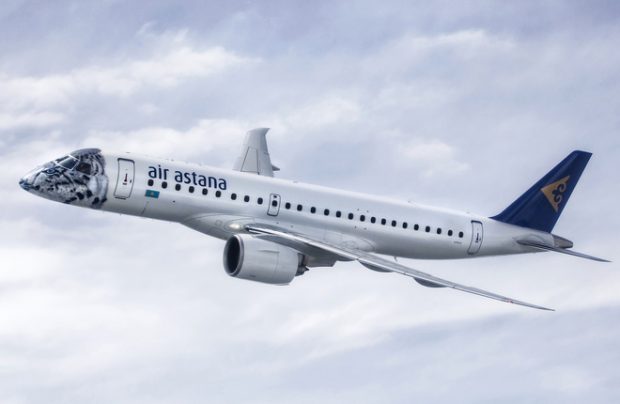 The E2 variant’s entry into service marks the beginning of Air Astana’s short-haul fleet renewal. Currently the airline operates nine first-generation E190s, the first of which was delivered in 2011 when the airline signed up to the Embraer Pool Programme. The programme has now been extended to include the new E190-E2 type.

Kazakhstan flag carrier Air Astana took delivery of its first E190-E2 jet in December 2018 and is currently operating the new aircraft on domestic and Commonwealth of Independent States (CIS) routes. The airline is expecting to receive four more E190-E2s in 2019 with the last of the five, all of which are leased by AerCap, to be delivered in the final quarter of 2019.

The pool agreement for the airline’s E190-E2 fleet covers unlimited access and full repair coverage for more than 325 individual components – with almost a third of them exclusively located at the airline’s main base to ensure expeditious availability.

“The support of the OEM [original equipment manufacturer] is a natural fit for Air Astana as we transition into our new fleet of Embraer second-generation E-Jets. This was fundamental in our decision to join the programme, which will allow us to upkeep our daily operations as it offers cost-effective and practical solutions, guaranteeing efficiency and competitive results,” stresses Peter Foster, chief executive of Air Astana.

Embraer’s Flight Hour Pool Programme, which currently supports more than 40 airlines worldwide, is designed to allow airlines to minimise their upfront exposure expensive repairable inventories and resources whilst taking advantage of Embraer’s technical expertise and its components repair service provider network. So far, 100 per cent of all of the E2 E-Jets that have thus far been delivered are supported by the programme.

Embraer Services & Support was created at the end of 2016.

Air Astana operates flights to more than 60 domestic and international routes from its hubs at Astana and Almaty. The company, which commenced operations in May 2002, flies an all-western fleet of 34 leased and owned aircraft and is a member of IATA.

Air Astana is a joint venture between Kazakhstan’s national wealth fund Samruk-Kazyna (51 per cent) and BAE Systems PLC (49 per cent).