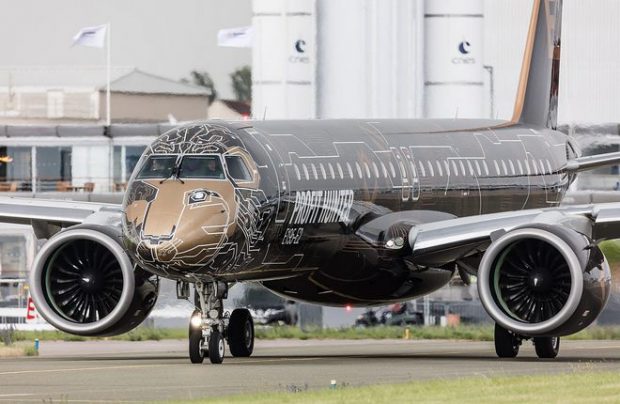 The TechLion-painted Embraer E195-E2, which was shown at this year’s Paris Air Show in June, is also coming to the MAKS 2019 event in Moscow (Embraer)

Embraer is to present the E195-E2, its largest passenger aircraft, at the Moscow Aerospace Show (MAKS) 2019, the Brazilian company told ATO.ru, Russian Aviation Insider’s sister publication. The same TechLion-liveried aircraft that was showcased at the Paris Air Show in June will be at the Zhukovsky airfield near Moscow.

The latest derivative of the aircraft family is a re-engined E-Jet E2 that is primarily characterised by its new Pratt & Whitney PW1900G engines, as well as modified wings, avionics and other equipment. Operations of the new family’s basic version, the E190-E2, began in 2018. The E195-E2 option, which offers an increased passenger capacity of up to 146 seats, received its type-certification from the aviation authorities of Brazil, Europe and the United States in April of this year.

The MAKS 2019 air show is being held at the Zhukovsky (Moscow Region) airport between August 27 and September 1 of this year. All the news coverage of the country’s main aviation event will be available on the official Show Observer daily, Russian Aviation Insider’s sister publication.

Deliveries of the first E195-E2s are planned for the second half of 2019, with Brazilian airline Azul becoming its first operator. The latest modification has become the bestseller of the re-engined family. Currently, the Brazilian aircraft manufacturer has 124 orders for the E195-E2, against 38 for the E190-E2.

The only operator of new-generation E2 in the former Soviet Union is Kazakhstan’s Air Astana, which currently operates a fleet of three smaller Embraer E190-E2 jets on thin routes, with the first aircraft having entered service last year.

Embraer’s E-Jet programme is about to be acquired by the USA’s Boeing Corporation.