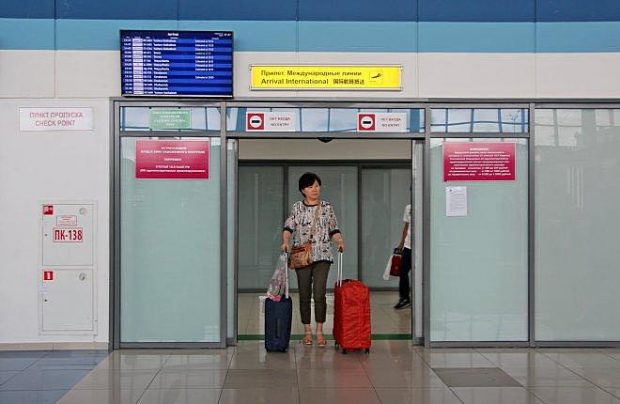 The simplified entry clearance for citizens arriving from 18 countries, and successfully implemented at Vladivostok, has now been extended to five more airports in the Far East (Vera Bykova / Vladivostok Airport)

Foreign passengers arriving in Russia via six airports in the Far East region of the country are now able to use the simplified entry clearance procedures of passing through new special passport control booths that accept visas in electronic formats.

The pilot project, which has been successfully trialled at Vladivostok‘s Knevichi airport, from the start of this month includes airports at Petropavlovsk-Kamchatsky (Yelizovo), Blagoveschensk (Ignatyevo), Khabarovsk (Novy), Yuzhno-Sakhalinsk (Khomutovo) and Anadyr (Ugolny). Similar capabilities are being installed at Magadan and Yakutsk.

The Russian entry visa in a digital format was first introduced in August 2017 and is currently available to arriving citizens from 18 countries: Brunei, India, China, Mexico, Singapore, Japan, Algeria, Bahrain, Iran, Qatar, Kuwait, Morocco, the UAE, Oman, Saudi Arabia, Tunisia and Turkey. Each passenger’s electronic visa application must be submitted no later than four days prior to the entry date, via a dedicated website hosted by the Russian Foreign Affairs Ministry. The e-visa is granted free of charge and is valid for a maximum eight-day visit within a 30-day period after the issue date.

Russia’s Ministry for the Development of the Far Eastern region asserts that the list of qualifying countries is likely to be expanded, adding that this new visa format is becoming increasingly popular with travellers. Whilst only a thousand applications were received in October last year, in June this year the demand had risen to more than 4,500. In total, since the launch of the project, some 27,500 tourists from 14 countries visited Russia using e-visas. The vast majority (21,600) were Chinese citizens and another 5,600 passengers arrived from Japan.

However, the airport spokesperson has revealed to Russian Aviation Insider that at present the majority of the airport’s international visitors – a figure which has risen to close to one million a year – are citizens of South Korea and the neighbouring Chinese provinces, who are automatically exempt from visa requirements. So the introduction of e-visas has not radically changed the volume of incoming international traffic. Nevertheless, the airport feels there is some potential in Japan, as well as from central and southern provinces of China. “We expect the most tangible e-visa effect on the airport’s operations to stem from Japan, the country where experts recognised the e-visa capability as a serious consideration. The airport is now working on attracting airports and travel agencies to stimulate demand and air connections between Vladivostok and cities in Japan,” the spokesperson comments.

Petropavlovsk-Kamchatsky Airport, one of the latest participants in the e-visa initiative, believes that international tourism is of “strategic importance” to Kamchatka. Boris Gorbunov, the airport’s media official, told Russian Aviation Insider that at present “aviation is the only way to enter the peninsula and so we expect the new e-visa regime will foster international traffic, primarily from the Asia-Pacific region,” he said.

The next region expected to benefit from the introduction of e-visas similar to the Far East experience is Kaliningrad, Russia’s European enclave. This development may happen as early as next year.