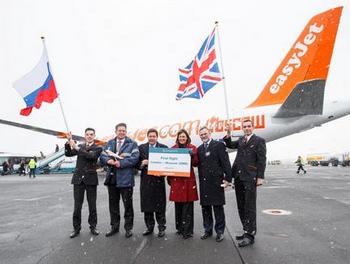 UK budget carrier EasyJet will suspend its only route to Russia, between London Gatwick and Moscow’s Domodedovo, from March 21, 2016 for an indefinite period. The airline explains the move by “significant and sustained reduction in demand for air travel”, due to “the macro-political environment, the weakness of the Russian economy together with the tightening of the visa approval process”. It will monitor the situation, and may yet resume the service should the demand restore, EasyJet said in a statement.

The low-fares carrier beat Virgin Atlantic to securing the route rights in 2012. However, in February this year it cut the number of weekly flights from 13 to 11, then further thinning the frequency to one-daily flights in its summer schedule. Earlier, EasyJet gave up on its plans to operate a Manchester-Moscow route.

The airline is unlikely to suffer any negative effect from exiting the Russian market. It has recently released its financial forecast, which predicts the company’s profits will reach US $1 bln by the end of the fiscal year. In July and August, EasyJet’s monthly traffic amounted to 7 mln passengers. It is the airline’s passengers that are likely to be affected. It is a safe bet that fares on the route between the Russian and British capitals will rise due to the fact that the original four traffic right holders (two per country) have now been effectively cut down to two: British Airways and Aeroflot, in the probable event of the latter absorbing Transaero.

EasyJet is not the first foreign airline to quit the Russian market. Earlier this year, Finnair and Lufthansa announced their plans to remove Nizhny Novgorod and Samara from their networks, citing economic reasons. Finnair is also suspending flights to Kazan. On the whole, the trend of international carriers downsizing their presence on the Russian market has evolved into a sustained tendency, mainly due to the plummeting traffic on international routes to or from Russia.