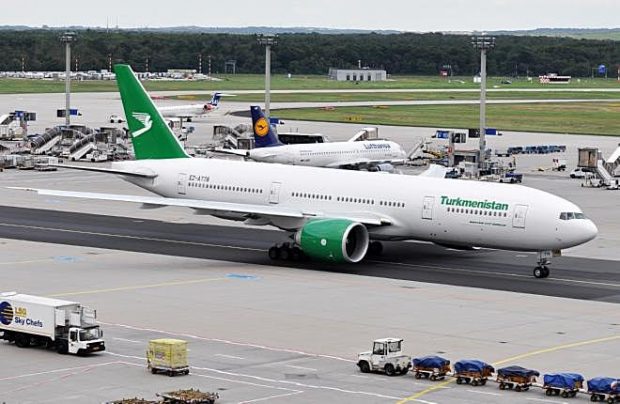 The all-Boeing national carrier of Turkmenistan, which is based at Ashgabat, operates B737s, B757s and B777s (Eric Salard / Wikimedia)

The delivery of a new Boeing 777-200LR wide-body aircraft to Turkmenistan Airlines (TUA) is scheduled for January 2021. A contract for the purchase of the new, long-range aircraft, the fourth of the type in the long-haul fleet of the Turkmen state carrier, was signed with Boeing Corporation by central Asian country Turkmenistan Howa Yollary agency of the Ministry of Industry and Communications, following an August 2, 2019 resolution of the president of Turkmenistan.

Turkmenistan Airlines first revealed its intention to acquire the US$346.9 million B777-200LR in June. The aircraft will be powered by GE90-110B1L engines and will be able to accommodate up to 317 passengers in a two-class layout, making it the most capacious airliner in its fleet.

According to the state programme for the development of civil aviation in Turkmenistan, by 2030, the airline’s fleet is planned to be increased to four dozen aircraft. The new B777-200LR will be the 32nd aircraft purchased by Turkmenistan Airlines directly from Boeing. The all-Boeing national carrier of Turkmenistan, which is based at Ashgabat, operates B737s, B757s and B777s.

In the meantime, since February, Turkmenistan Airlines continues to be banned from operating flights to the EU, so its long-haul 777s are currently deployed on routes such as Ashgabat to Istanbul and Ashgabat to Moscow (both some 2,500 km). However, with the support of Lufthansa Consulting, it is currently working on bringing its standards in line with the requirements of the European Air Transport Safety Agency (EASA) in order to return to flying to EU countries.