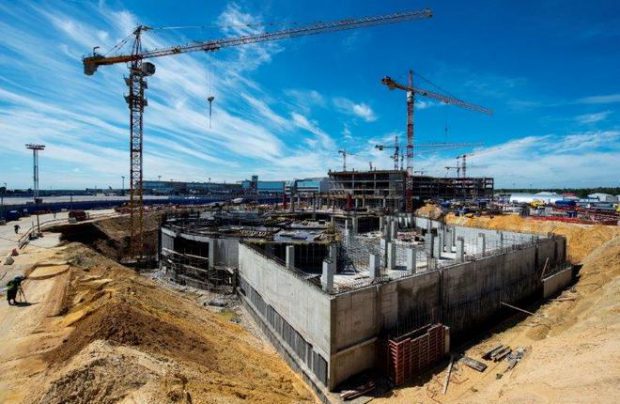 Construction project of the new T2 passenger terminal at Domodedovo Airport in Moscow has been approved by the relevant authority (Russia’s General Board of State Expert Review).

The project designed by the Signy Group, and calls for a new building that will provide extra 235 000 meters of floor space. It will adhere to the one-floor terminal concept allowing the airport to maximize its passenger transfer potential. The upgraded terminal will offer 100 check-in counters and around 40 self-service check-in kiosks. The expected annual passenger capacity will reach 12 million people.

The arrival and departure zones will be located correspondingly on the first and the second levels. The building will provide office space, as well as room for airline business lounges, a tourist center, a passenger transit zone, and other administrative and utility premises.

The construction of T2 Terminal is underway. As reported earlier, the works are to be completed in 2018, right on time for the start of the World Football Championship. The new segment will have 11 gates with 19 jetways capable of handling double-deck Airbus 380s and Boeing 747s. Part of the jet bridges will be able to provide simultaneous passenger boarding and deplaning for long-body aircraft.

The new airplane stands will be equipped with innovative pit-systems  enabling the aircraft to access the entire apron infrastructure  (particularly, power and conditioned air supply as well as grey and potable water services) which will reduce turnaround time and enhance flight safety.

Upon its completion, the overall annual capacity of the airport’s new passenger terminal (T1 and T2 combined) will exceed 45 million passengers. Apart from its plans to expand the existing T1 terminal by almost 4 times by 2017, Domodedovo will also receive the third terminal (T3) with the floor space of about 275 000 square meters. It is to be brought into operation in 2023, the airport spokesperson says.

The new runway, which is currently being surfaced, will substitute the existing second strip (it will be used as major taxiway later on). Considering a delay in the project’s timeline, it is expected to start operation next year.

According to Federal Air Transport Agency reports, the passenger traffic in Domodedovo went down 8.6% in the first half of the year and stood at 15.9 million.