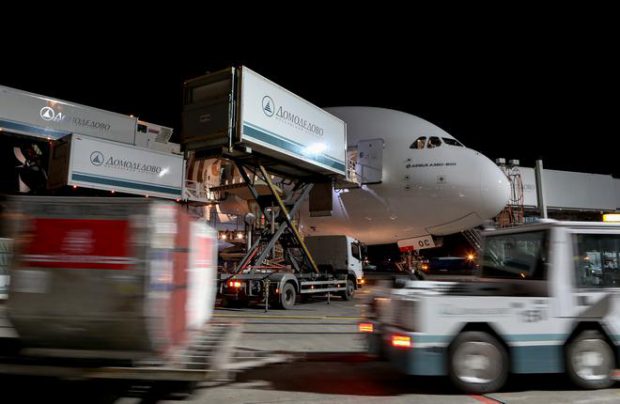 Domodedovo’s new charges are aimed at relieving the financial burden of airlines and increasing competition among ground handlers (Photo by Leonid Faerberg / transport-photo.com)

Moscow’s Domodedovo Airport is introducing a new approach to charges for using its infrastructure. Instead of charging all of its customers, Domodedovo will now only bill those companies that actually use its facilities. This means most airlines will be free of paying for infrastructure they did not use, Domodedovo’s deputy director for commerce Alexey Rayevsky told the audience of the Ground Handling Russia & CIS conference in Moscow.
“We shifted part of the costs [associated with ground infrastructure maintenance] from airlines to those who actually use it. So we excluded this charge from the standard take-off and landing fees and other payments airlines make,” Rayevsky explained. However, if an airline performs some of the handling operations itself, it will be charged for using the airport’s facilities.

The fares are based on particular infrastructure objects an operator or ground handler uses and on the actual expenses the airport incurs for maintaining that infrastructure.

Commenting on the reasons for such a decision Rayevsky said: “We have currently got, de facto, over 65 non-affiliated companies active at Domodedovo. And under the previous scheme these did not pay anything for using the airport’s facilities. So it turns out that our only affiliated agent, which serves less than 50% of passenger traffic, bares the entire load. What we are doing now is a very unpopular measure of making all agents equal in terms of sharing the infrastructure maintenance costs.”

According to the spokesman the airport started to introduce the new practice last year and has been particularly persistent since this April. However the implementation met a certain level of opposition from those airlines that have in-house handling agents or integrated ground handling providers.
New handling companies, which Domodedovo attracts in order to increase competition, have no objections to these rules.

Domodedovo is the second largest Russian airport. It served 30.5 million passengers in 2015.