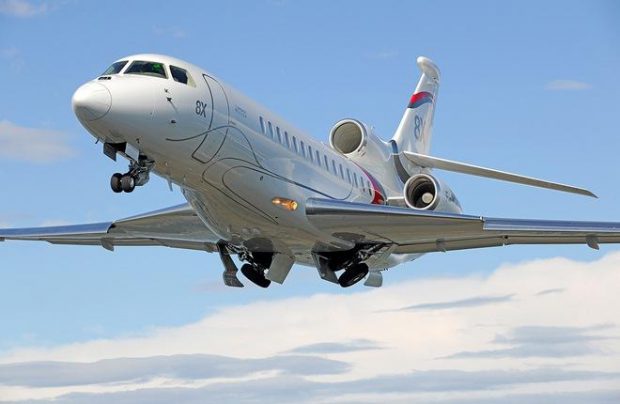 The Russian Federal Air Transport Agency has certified the Dassault Falcon 8X ultra-long range business jet in the country. In parallel the agency certified the Pratt & Whitney PW307D powerplant. Russian Aviation Insider learned the news from a Dassault Falcon representative at the EBACE 2017 conference and exhibition in Geneva.

Seeing as the Falcon 8X is based on the 7X model, and its powerplant is a modification of the PW307 variant, the manufacturer had to obtain a so-called major modification approval for the aircraft. The certificate, issued on May 22, is registered as FATA-02082A-MC-04

Falcon operators will now be able to have their examples of the French manufacturer’s flagship business jet registered in Russia. Dassault says the first such aircraft will be delivered to a Russian customer in the coming weeks.

The new aircraft was put into operation seven months ago, in October 2016. The Falcon 8X has a cabin that is 13 m long, 1 m longer than the 7X. It also offers a range of 11,945 km, 925 longer than the baseline. This longest-range, largest-cabin member of the Falcon family has a cabine volume of 48 cu.m and can seat up to 19 passengers.

The 8X’s ultra-long range (with eight passengers and three crew at a cruise speed of M=0.8) is thanks to an extra 1.3-ton fuel tank installed in the center win section. Other factors include the upgraded PW307 turbojets, which have 5% more thrust, as well as aerodynamic improvements and new winglets. Dassault makes a special emphasis on the aircraft’s technical characteristics and operating economy, noting that the three engines give it an edge over the competitors in hot-and-high takeoff and landing performance, which substantially expands the list of airfields from which it can operate.

A 14-hour flight will take the 8X from Moscow to Sao Paulo, from Paris to Tokyo, from Beijing to London, or from New York to Dubai. Just as any other Falcon aircraft developed to date, the business jet is capable of landing at one of the world’s most demanding airports, London City, with its steep glide slope.

The 8X fits in between the new twin-engine Bombardier Challenger 350 and Global 7000 business jets. Its cabin is larger than that of the Challenger 350 but smaller than the Global 7000’s. The same comparison applies to the number of passengers the three types can carry. The 8X’s catalog price stands at $58 million. The Falcon 7X/8X family is very popular in Russia.